This article was developed during the rewrite of the Weight and Balance Manual when the  airworthiness team felt a short section on the CG position for optimal performance needed  to be included.

There is no magic position for the in-flight CG position, which is a single point optimum for ultimate performance. Rather, there is a modest range of CG positions within the allowed flight CG limits that yields best performance.

Calculation of the elevator deflection and resultant profile drag is difficult and time consuming unless you have an accurate computer simulation. With modern sailplanes it can be difficult to get the aerodynamic data for the custom designed airfoil used on the tailplane. Typically a modern tailplane airfoil will have very small changes in profile drag for elevator deflections a few degrees either side of neutral.

The methodology of estimating the optimal CG position is to calculate the CG position required to balance the wing pitching moment such that the tailplane needs to generate zero lift. Then estimate the elevator deflection and tailplane lift coefficient across a range of CG positions either side of the CG balance point to estimate the tailplane profile drag and induced drag. This is used to create a tailplane drag polar similar to that of the entire sailplane.

The Standard Class Sailplane
For the example standard class sailplane, I chose to model the ASW-24. This was because it is a relatively modern design for which quite a few technical papers have been written. As a result, I had sufficient data on the pitching moment of the DU84-158 wing airfoil and the profile drag of the tailplane airfoil.

It will surprise many pilots that the optimum CG for slow or thermalling flight is at the forward end of the CG range. At high angles of attack, the wing pitching moment is small and the CG position to produce zero lift at the tail is very close to the 25% MAC point. The tailplane is also at a high angle of attack and will produce lift unless the elevator has a large negative (upwards) deflection. The deflection of the elevator increases the profile drag and it was found the least tailplane drag was produced with a CG postioned a little aft of the zero tail lift balance point. This reduced the profile drag for a minor increase in the tailplane induced drag. This results in the tailplane producing an amount of lift.

At best L/D speed it was no surprise that the optimum CG was at 50% of the CG range. While the nose-down pitching moment from the wing is greater, the tailplane incidence was set slightly negative to produce 0 degrees elevator deflection at this speed. This was designed to produce minimum drag and give the best possible L/D. At this point the minimum tailplane drag is with the CG positioned to give a small downforce at the tailplane.

Figure 2  Best L/D speed. Moderate pitching moment from wing results in optimal CG being at centre of CG range. Nil elevator deflection for this sailplane design at this speed.

Figure 3  High speed flight at negative angle of attack. Large pitching moment from wings results in optimal CG being aft with minimal lift at tailplane. In general the CG can not be moved aft far enough for stability reasons and the tail will generate some downforce.

Charting the results gives the following:

Figure 4  Chart of Optimal CG Position
While it looks to be best for a strong soaring day, flight at the aft CG limit is risky. The aircraft is less stable and there is a greater risk of entering a spin. If a spin is entered, it is likely to take longer to recover with greater height loss. This height loss will be far greater than the performance gain. The intangible effect of flying at the aft CG limit and with a less stable sailplane is increased pilot fatigue, which can lead to poorer decision-making and worse competition performance.

The best position for cross country performance will be a compromise depending on what percentage of the flight is spent cruising and what percentage is spent thermalling. As a generalisation, optimal in flight CG position is approximately 70%-80% of the CG range depending on the sailplane type and the soaring conditions. If weaker conditions with a greater precentage of the flight spent thermalling are expected, the CG should be adjusted further forwards. If stronger conditions or if streeting is expected with greater time spent cruising, the CG can be tweaked a little aftwards.

The Racing Class Sailplane
For the example racing class sailplane, I chose to model the DG-200. Although an older sailplane, it used the FX67-K170 airfoil which was also used on the Mosquito, Mini-Nimbus and PIK-20 sailplanes. The results for the DG-200 will be broadly applicable to those sailplanes as well. I did not have the aerodynamic data for the DG-200 tailplane, so I used the FX71-L150/30 airfoil. It is very similar to that used on the DG-200 and is what the airfoil used on the Mosquito and PIK-20. Unfortunately, the data I have neglects the drag curves for the +/- 5 degree deflections and I suspect my tailplane profile drag results are slightly skewed as a result.

The optimum CG for slow or thermalling flight with positive flap was in the middle of the CG range. The wing is operating at the upper end of its angle of attack range and the wing nose-down pitching moment is small. The positive flap deflection also produces an additional component to the nose-down pitching moment. Similar to the standard sailplane model I expect the optimal CG position for minimum tailplane drag to be a little further aft than my estimates show.

Figure 5  Slow speed flight at high angle of attack and positive flap. A moderate combined pitching moment from the wing and flaps results in optimal CG being central in the CG range with minimal lift at tailplane.
With the flaps in neutral and the angle of attack lower, the wing produced a similar nose-down pitching moment as the slow speed flight and the optimum CG range was again in the middle of the CG range. While this is the best L/D setting for the sailplane, the 0 degree elevator deflection was designed to occur in the higher speed range with negative flap. This was a choice of the designer to reduce drag at higher speeds rather than at best L/D.

Figure 7 Negative flap. The flap produces a nose-up moment that counters the wing nose-down pitching moment. The optimal CG is in the forward CG range as a result.

The best position for cross country performance will be a compromise depending on what percentage of the flight is spent cruising and what percentage is spent thermalling. As a generalisation, optimal in-flight CG position for this flapped sailplane is approximately 40% of the CG range for stong conditions (depending on the sailplane type). For moderate conditions with greater time spent thermalling, the optimal CG is further towards the middle of the CG range.

It is important to not confuse elevator forces at the control column with tailplane drag. Control column forces are the result of airspeed and control deflection. An example would be flying with an aft CG at low speed in a non-flapped glider. This will produce low stick forces because the elevator deflection is small. However, the tailplane will be producing a lot of lift and induced drag that is only slightly offset by the reduced profile drag from the lower elevator deflection. 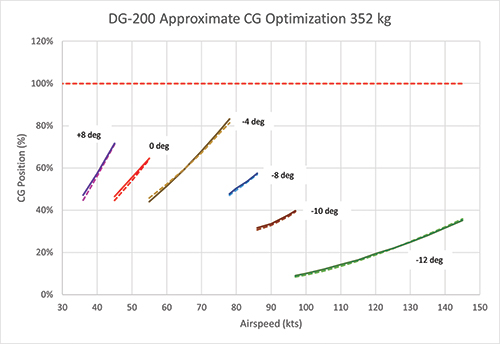 Note for All Flying Tails
These results assumed a conventional tailplane with elevator. For an all-flying tail, the tailplane minimum drag occurs at tailplane zero lift as the tailplane will be at 0 degrees angle of attack, which results in both minimum profile drag and minimum induced drag.