Wave- Ridge - Thermals at The Vale

Simon flies a Pipistrel Taurus G2 electric self-launch motor glider from his farm in northwest Tasmania.
He has been using his glider to study the principle techniques pilots use to sustain soaring flight in October 2020 in three distinct weather systems. 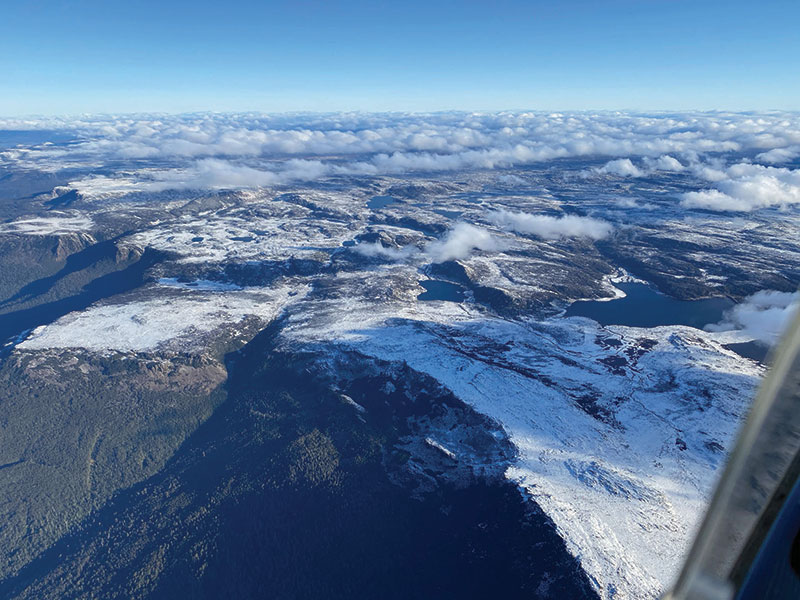 Flying in wave above Central Plateau Cliffs in Tasmania.

This is a good introduction to the three main types of soaring you will encounter – thermal, ridge and wave soaring – and how to utilise weather forecasting and instruments to make the most of the weather on any particular day. 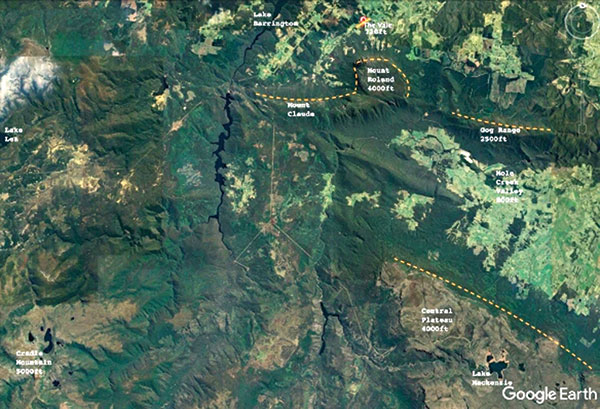 Many opportunities for soaring flight are driven by this complex geology.

Three Days Soaring at The Vale

The Vale Airfield is a 1,300m grass runway running parallel to the Dasher River in northwest Tasmania. It is situated only a couple of nautical miles from a beautiful mountain, Mount Roland.
This 4,000ft granite beast dominates the local view all the way to the nearby town of Sheffield. It is part of a system of ridge systems that give way to the Tasmanian Central Plateau. The Plateau is a large, gorgeous, pristine alpine lake region that includes the world famous Cradle Mountain National Park.
Over the last several months, I’ve been gradually and carefully exploring this complex, fascinating and beautiful area from the air, through a variety of weather conditions.
The conclusion I’ve reached is that we are fortunate indeed to have an airfield that is surely one of the best places in Tasmania to fly gliders. There are many opportunities to go soaring here, using a wide variety of ‘lift’ mechanisms enabled by this fascinating and complex terrain – and to do it all year round!
Let’s start with an annotated Google Earth image of the local area from the point of view of a soaring pilot. The orange dotted lines are some of the local area ridge lines. Many opportunities for soaring flight are driven by this complex geology 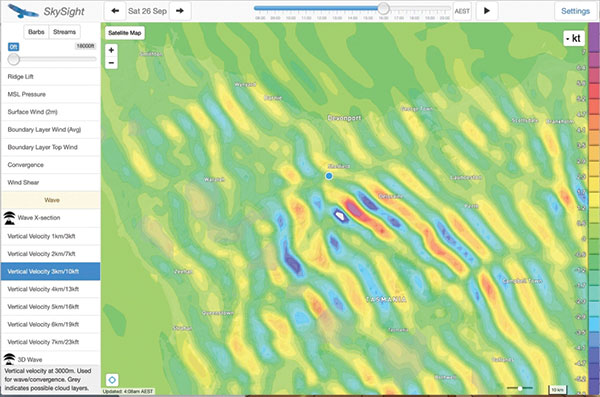 Close up view of wave prediction in Skysight.

One of the most wonderful ways to go soaring in a glider is the use of mountain lee waves.
Wave in this context refers to a large standing wave that forms in the atmosphere downstream (to the lee) of a large physical feature such as a mountain in the presence of a strong and consistent wind that increases in strength with increasing height. 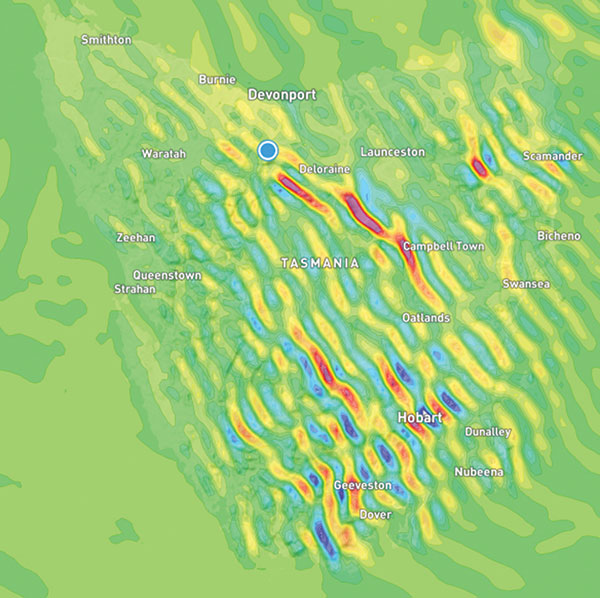 Wave as shone in Skysight for the whole of Tasmania.

Mountain waves can extend into the sky to heights that are multiples of the height of the ground feature that triggers them. What forms in the air is an ‘echo’ of the shape of the ground feature, high up in the sky, with the into-wind side being a tide of rising air that can be surfed in a glider to gain height.
Even better, if the wind keeps getting stronger with height, the primary wave system can act like another mountain. One wave can trigger another wave system, located further downwind and higher than the primary wave. This can keep happening, with multiple wave systems capable of ‘stacking up’ in a rising sequence.
Clouds can form in the middle of a wave system, appearing in a classic lenticular shape, being quite literally polished by the air rotating around the wave core. In the presence of multiple secondary waves, there can be a stack of these lenticular clouds 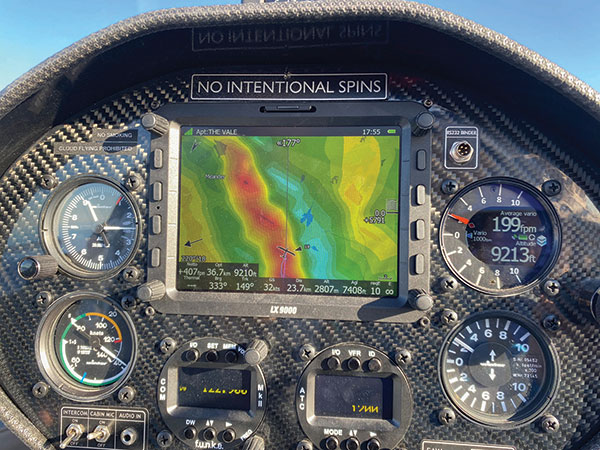 Skysight overlaid on the LK9000 for use in flight.
.
On the day we flew, no lenticular clouds had formed to indicate the presence of the wave system. It was still there, but it was invisible.
However, I had another way to find the wave. I used a fabulous soaring pilots’ weather prediction application called Skysight.
Skysight has access to global, highly accurate weather forecasting data that it uses, with a great deal of smart number-crunching, to generate predictive visual forecasts for glider pilots. These forecasts help them to predict, with a high degree of accuracy in both space and time, the presence of various distinct types of weather systems that can be used to sustain soaring flight.
As per the image [right] the Skysight model showed the presence of a substantial primary wave system above 5,000ft, then extending through multiple secondary wave systems all the way up to over 20,000ft. It turns out that this wave system sets up quite frequently in Tasmania in the cooler months.

An impressive example of such a system happened back on 12 April 2020. This was not a day that I could fly, unfortunately, but have a look at just how impressive the wave system was, right across Tasmania. To go with it, lennies were very much in evidence in the sky. A soaring pilot could have hopped from wave to wave, literally across the entire state.
Back to the present, with my son Gabe as our photographer and co-pilot, it was time to see if the computer model was accurate in telling us that the wave was there, even though the indicator clouds were not.

To help us find this quite invisible lift system, it was time to engage another piece of equipment, the LX9000 soaring glass-cockpit system in my glider. The LX9000 is an incredible instrument. One of its plethora of features is the ability to import Skysight predictive map overlays directly onto the device for display in flight.
This means that, with the wave predictive model on screen, we could fly the glider under power up to the height and position needed to contact the wave system, and then shut down the motor and start playing. 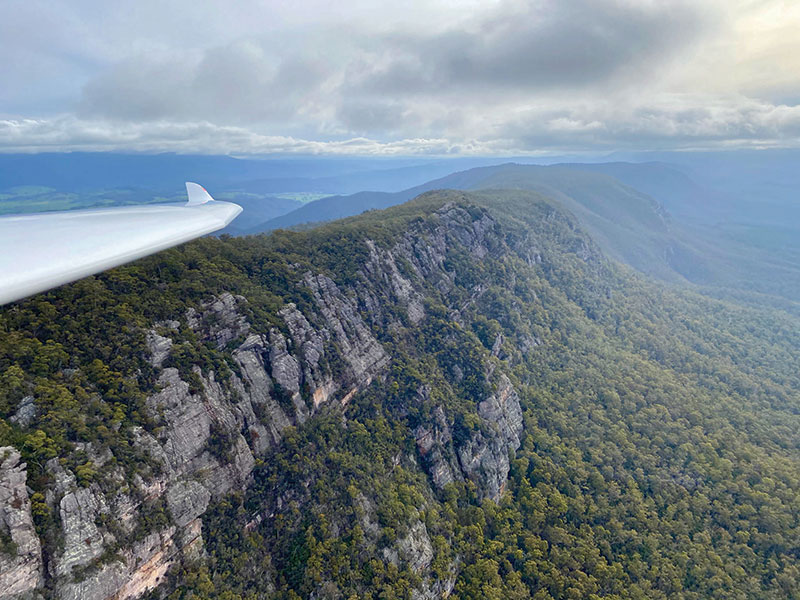 First visit to the Gog Range in ridge conditions

We did precisely this. We climbed to about 5,000ft and flew to the edge of the predicted lift zone, and shut down the engine. As if by magic – there it was. We just starting going up.
See what the Skysight wave overlay looks like in the LX, in flight, in the aircraft. [Right] On the image, the lift zone is the yellow/orange/red zone on the map.
This photo was taken at a later point, when we had already climbed in wave up to over 9,000ft, successfully working the primary wave system with the Skysight predictive model overlaid on the LX9000.

Wave lift is wonderful – a smooth, quiet journey of exploration, quietly working your way back and forth along the lift band.
Being a system driven entirely by wind, wave conditions can be, and mostly are, present in the depths of winter, when flat-land glider pilots have given up gliding for the season due to the lack of any useable thermals.

We flew the glider up and down the Mole Creek Valley on our climb, and wound up high over the edge of the Central Plateau. The Plateau was covered in a layer of snow from the previous night, and it looked rugged and wonderful.

Thermals are columns of rising hot air, driven by the sun differentially heating the ground. When there is sufficient moisture in the atmosphere, that rising air condenses at the top of the thermal to form a cumulous cloud, or ‘Cu’. Thermals can exist whether the Cu clouds are there as indicators of it or not.
Covering ground on a thermal day involves circling slowly and tightly in the core of the rising air, gaining height, until the thermal starts to weaken. Then it is time to set sail for your intended destination, optimising your cruising performance by slowing down in lift and speeding up in sink, a technique called ‘dolphin soaring’. If you get low again, it is time to find another thermal.
Back in Tasmania on Day Two, the wind had moderated and the day was several degrees warmer. The Skysight weather model indicated that thermals would occur in the middle of the day rising to 5,500ft or so, which is easily high enough to have a very fine flight.
We set off to explore those thermals and found that they were big, wide and gentle, which isn’t always the case, and that the intermediate sink zones were also quite moderate. Gabe and I wound up reaching around 6,000ft, much in accordance with the prediction, over the very same valley that we had wave soared across the day before. The snow on the Central Plateau from the previous day had already started to melt.

Ridge soaring is perhaps the simplest soaring lift method to understand. If the ambient wind strikes a perpendicular obstacle like a ridge line, the air has no choice but to go up.
The 4,000ft Mount Roland, right beside the airfield, works really well for ridge soaring. The mountain is almost square, with sheer faces on the west, north and east sides. You can see this shape clearly on this Google Earth image of the local area. Orange dotted lines show soarable ridge faces.
I’ve done a lot of ridge soaring on Mount Roland and on the ridge line extending immediately to the west, toward Mount Claude. However, until Day Three, I had never been over to the eastern ridge line – the Gog Ranges.

I took off and motored up above the Gog Ranges, shut down the engine, and wafted down to the ridge line to give it a shot. The wind was in the right direction but wasn’t very strong, so I couldn’t get much above ridge-top height. But I had no problems in maintaining that height, while flying end to end along the Gog Ranges at will with an armchair view, watching the world go by.
After a few passes back and forth along the full length of the ridge, I recorded a short video of the experience. You can view the video here bit.ly/3eoJfKM

The Gog Range is around 2,500ft high, and the terrain and the forest are really quite pretty. Ridge soaring allows you the opportunity to see it all up close and personal.

Interestingly, the Skysight ridge lift prediction didn’t highlight the Gog Range, but it did show good ridge conditions on the edge of the Central Plateau itself, parallel and to the south of the Gog Range. It was that prediction that gave me the impetus to try the nearer, smaller Gog Range line.

The Central Plateau is a much higher, much sheerer face, but it is also somewhat further away with a long motor run back into wind to get home. That is something to try on another day.

Here is how the ridge looked, from the far eastern end, looking back toward Mount Roland in the distance. First visit to the Gog Range in ridge conditions [top left]

This ridge flight in the Taurus Electro capped off three excellent days, experiencing three different weather systems and three different sorts of soaring technique, all in the same place. What a wonderful spot to go gliding! 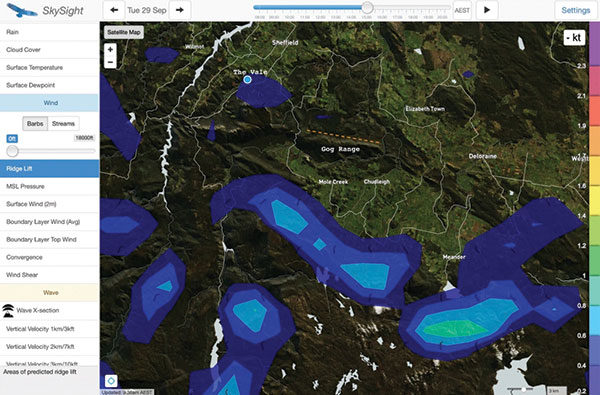