Aero Towing out of Paddocks 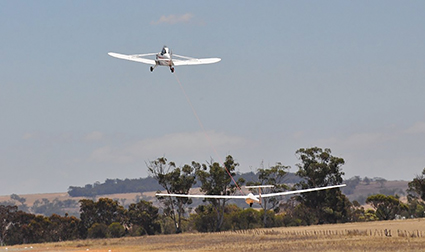 When pilots go through cross country endorsement, the outlanding check is conducted in a two-seater and the instructor usually heads for a large flat paddock that will be suitable for the exercise. This paddock is likely to be well known to the instructor and, in principle, will be suitable for an aerotow retrieve subject to final checking. When racing cross-country, the situation is different. Pilots will certainly be looking for a safe paddock to land in, however, an aerotow retrieve is a secondary consideration. The safe landing is the priority, not the retrieve.

So, when you have landed in a paddock, what are the factors to consider before calling up the tug? Read through the list below, not necessarily in order of importance.

When a total fire ban is in place, it may preclude any type of retrieve from the paddock.

600m is the legal minimum paddock length. Walk the full 600 metres. There may be rocks, rabbit holes and small indentations that will break your undercarriage and are not immediately obvious. Remember, there is no such thing as a short field take off. The paddock is either long enough or it isn’t.

Look for a suitable point for the tug to touch down and convey any relevant factors to the tow pilot before he lands. Work out what you are going to say in advance. This will keep the radio conversation brief while he prepares to land.

Before the tug arrives have a good look at the surroundings. Each outlanding is unique, and there are no fixed rules. Work out the best flight line out. Is it better to take off into wind uphill or across wind downhill? The danger of uphill take offs are the long, slow ground roll.

Beware also of downhill take offs with a tail dragger! The centre of gravity starts to move nearer the front wheels as the slope increases, which has proven very expensive in the past. If the paddock is harrowed, is it better to take off along the harrows? There is a risk of breaking the undercarriage if you take off across them. There are a lot of factors to consider, make sure you have assessed them all. You will have plenty of time to do so awaiting the tug. A few such factors are discussed below.

Look at where you will land if there is a rope break. That is, formulate an escape plan.

Discuss and plan the retrieve with the tow pilot once he has arrived. Don’t hook on and rush off as soon as the tug has landed. Consider the line you will take out of the paddock, where and at what point you should abort. Discovering the paddock slopes uphill halfway through the take off is too late, and you could be in trouble. If in doubt, release.

As well as the paddock’s slope, consider the wind direction and strength and also the temperature – the hotter it is, the less power the tug has. Discuss any radio talk required during the operation. State, “I will call as soon as I am flying” so he knows your progress without looking in the mirror. But don’t be preoccupied with radio communications. Remember – aviate, navigate, communicate. Spend plenty of time planning the whole operation.

Do not assume the tow pilot knows all. It’s a team effort and you don’t have to proceed with the retrieve if you’re uncomfortable with the situation.

Push the glider back to the limit of the paddock. In some cases this can be done alone, but if not, then with the tuggie’s assistance. I am sure he will help. Remember, one of the most useless things in aviation is the runway behind you.

Prop up the wings. Dragging a wing on the ground places horrible strains on the airframe. When possible, I prop the wing up with sticks or fallen branches. These lie around the edges of most paddocks. Place one under each wing so that the wings are level prior to the start of the ground roll. A much less stressful launch for the glider and pilot results. As an alternative, a pile of rocks could be used instead of branches.

One also needs to consider which wing should rest on the ground if you can’t prop the wings level. Naturally you want to lift the wing as soon as possible. The greatest assistance you will have is the prop draft from the tug. The prop draft will give increased lift to the wing that it passes over. So how do you take advantage of this?

If you are launching straight into wind, place the glider slightly off line to the tug. You will need to have told the tuggie that you are doing this and why. Place the left wing on the ground with the centre of the wing directly behind the tug. If, however, you have a crosswind - let’s say, for example, from the right – it is better to have the wing that is into wind, the right one in this case, off the ground as the wind will bend the prop draft over the lea wing that is on the ground. Don’t rush the launch. Be sure when you start the ground roll that all checks have been carried out and you are relaxed and confident. However, still be prepared to pull the bung if necessary.

Finally, if you think the paddock is not suitable for an aero-retrieve, call for a trailer – it’s cheaper!

It is in the glider pilot’s best interest to have a basic knowledge of the factors affecting the take-off distance required (TODR) for a powered aircraft. After all, an aerotow upset can really wreck your day. Don’t assume the tow pilot is fully aware of the TODR for his tug. Also, as the glider pilot, you do not have to accept his judgement for a particular take-off situation.

What affects the take off distance required for a powered aircraft glider tug? I hate to bring a formulae into the discussion, but all pilots should have a basic understanding of this: Lift = CLift. ½rho.V2.S where ‘rho’ is the air density, ‘V’ is the velocity of the aircraft and ‘S’ is the wing area. So the main factors affecting the lift produced by the tug’s wing and hence its ability to fly is ‘air density’ and ‘velocity’.

• Hot air is less dense with fewer molecules per unit volume, which reduces lift for a constant ‘V’ and is also why thermals rise.

• Altitude/elevation. The higher you are above sea level, the less dense the air. On aircraft performance charts, these two variables are combined into what’s called density altitude. To generate the same amount of lift with a reduced air density requires a higher velocity (see formula). This is also why true airspeed (TAS) is greater than indicated airspeed (IAS) at altitude.
IAS is a dynamic measurement proportional to ½rho V2, where TAS is the speed of the aircraft through the air. At 5,000ft, TAS exceeds IAS by 8% and at 10,000ft by 17%. I might remind pilots at this point that flutter is dependant upon TAS and not IAS.

A take-off on a hot day and/or from an elevated runway will need a greater TODR. Why? With a reduced air density the tug needs to accelerate to higher ‘V’ where the lift produced enables the aircraft to fly. This requires more time, which equates to a longer ground run and hence requires more runway. Also, a reduced air density decreases the maximum power produced by the engine, which has a further negative effect on the TODR.

The other essential element for lift generation by a wing is velocity. The velocity we are talking about is the velocity of the airflow over the wings, not the ground speed of the tug. Fortunately, the ASI indirectly measures the speed of airflow over the wing. The aircraft’s ability to fly and its stall speeds are determined by reference to the IAS, not the ground speed or TAS.

Among significant factors affecting the tug’s ability to accelerate to the IAS or ‘V’ for take off is the nature of the runway surface. A rough, sandy or wet paddock or long grass will retard the aircraft’s acceleration on the ground roll, as will an up slope. Hence, the tug will take longer to reach the IAS for take off. A longer ground run requires a longer runway.

I landed at Jindabyne one winter’s day to take some friends for a joyflight over the ski fields. RWY elevation was 3,400ft and length was 1,000m with long grass. The grass retarded the aircraft’s acceleration much more than I expected and I could not reach TOSS. I elected to pull up into ground effect about 5ft with the stall warning sounding. As I maintained this altitude, the aircraft rapidly accelerated and I then commenced a normal climb out.

Wind speed is another vital element in the process of determining TODR. If you take off into a 20kt wind, the wing already has 20kts of lift, producing airflow before the take-off roll commences, so the tug will reach flying speed a lot sooner and hence have a shorter ground run than in calm conditions, hence less TODR.

Have you ever noticed how slow FSJ is moving with respect to the RWY? When on climb and taking off into a 15-20kt wind, yet IAS will be 60kts. The other benefit of taking off into the wind is that the climb-out is steeper relative to the ground, which has definite benefits for obstacle clearance, such as the trees at the end of the paddock!

Of course, taking-off down wind is not recommended. For a 10kt tailwind there will be no lift-generating airflow over the wings until the aircraft has exceeded 10kts forward velocity – that is, with a 10kt ground speed, the IAS will still read zero! TODR in this situation can be frightfully long and the climb-out very shallow. Also, for the glider pilot behind the tug, flight controls can be very ineffective during the initial ground run. NOT A GOOD SITUATION!

To summarise, a hot day combined with a rough boggy runway (paddock) surface with an up slope with nil wind should ring alarm bells for the pilot and he should realise that a greater TODR is required. In each powered aircraft’s flight manual is a chart that allows you to input the temperature, runway elevation/slope/surface, and wind speed to actually determine the TODR.

So once you have determined the TODR, pace it out. If the take off distance available – in other words, the length of the paddock – does not equal or exceed the TODR, then aerotow is not possible. Add a bit extra to this figure, as the performance charts were compiled using a brand new aircraft/engine, which did not have a glider on tow. I am sure one of the Club’s tow pilots would be happy to show you FSJ’s ‘P’ charts. And finally, the RWY / paddock is either long enough or it isn’t.