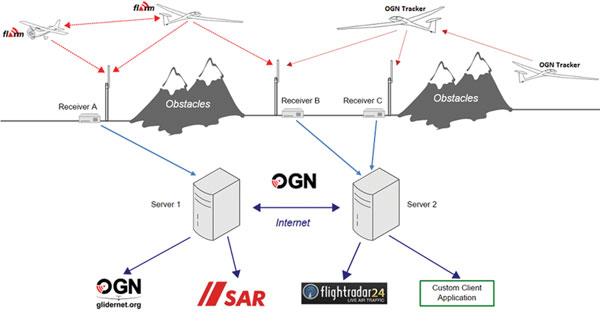 Emerging technologies, the internet and projects including the Open Glider Network (OGN) glidernet.org are changing the very nature glider competitions around the world. In World Gliding Championships team flying and communication with ground crew is permitted and teams are making full use of these new resources. Allan Barnes shares  what he learned while crewing for the Australian team at the JWGC Lithuania in 2017.

Europe now has a large network of FLARM receivers. These ground-based receivers may be set up and linked to the network at very low cost - typically 100 EUR per installation. They are linked to several publicly viewable websites such as glidertracker.de. where the data is presented graphically.

Consequently, all FLARM devices may now be tracked pretty much anywhere in Europe in real time.
The 2017 Junior WGC in Lithuania required all competitors to identify their FLARMs by registering on the Open Glider Network (OGN) glidernet.org

The organisers arranged a specific web page which filtered just those gliders who were in the competition, and overlaid the map with the task details. The position, speed, height and climb-rate of all competitors could therefore be viewed in real time by ground support, and relayed to pilots in the air. This webpage also provided the ability to show at a click the competitors sorted by any of those parameters, including height above ground. jwgc2017.onglide.com

Consequently, the role of ground crew changed enormously. The Australian ground crew notified our pilots as competitors in their class started the task, how their run was going, and whether any were returning for restarts. We advised pilots on which end of the start line was working best, and where pilots were getting the best or highest climbs. En route, for each competitor, we had one person fully committed at all times to notifying them of any nearby competitors who were in reach and climbing. With a snail-trail of every competitor’s track overlaid on Google Maps, we could also advise exactly where thermals had been coming off the ground, and steer them into those thermals by radio.

We could advise them of which routes were working best, where competitors were turning in AATs, and how well pilots were doing on their final glides.

This groundwork was extremely stressful and tiring, but absolutely critical to providing our pilots with a level playing field. Other teams with more personnel were better placed to provide more thorough information. The British, for example, had brought their own mobile ground antennae and set them up in areas of poorer reception. They were therefore able to guide their pilots through those areas, where we were blind.

In competition terms, pilots with a strong support team on the ground had a large advantage. Pilots were even more reluctant to start when they knew no other pilots had done so. This made pre-start gaggling much worse, to the extent that pilots would delay until a land-out was inevitable rather than start before others.

Technology in the Cockpit

It is only a matter of time before this technology transfers directly into the cockpit. Pilots can already present these websites on their mobile devices in the aircraft. But an enhanced FLARM receiver, mounted in the tail, could provide the same information directly, without using the mobile network. The desirability of these advances is debatable.
This is the first year that this technology has been widely used in competitions.