Airworthiness - The Benefits of Being Well Connected

Unfortunately, the statistics show that in Australia at least one sailplane each year attempts to go flying either with something disconnected, or something that becomes disconnected in flight. The figures are based on the formally reported incidents, and it is quite possible that there are many more incidents that remain unreported. To put this situation in perspective, the British Gliding Association reports around three flights with disconnections each year. While there are a number of reasons behind this, one of the reasons is that the BGA do not perform independent control connection checks after rigging.

It is no surprise that the majority of the reported disconnections are for flaps, airbrakes and ailerons. After all, these controls make up the majority of the aircraft controls that are routinely disconnected and connected during derigging and rigging and there is typically a connection each per wing. Adding to the difficulty is that most fibreglass sailplanes have limited access to these connections, which often makes visual checking and verification very difficult. 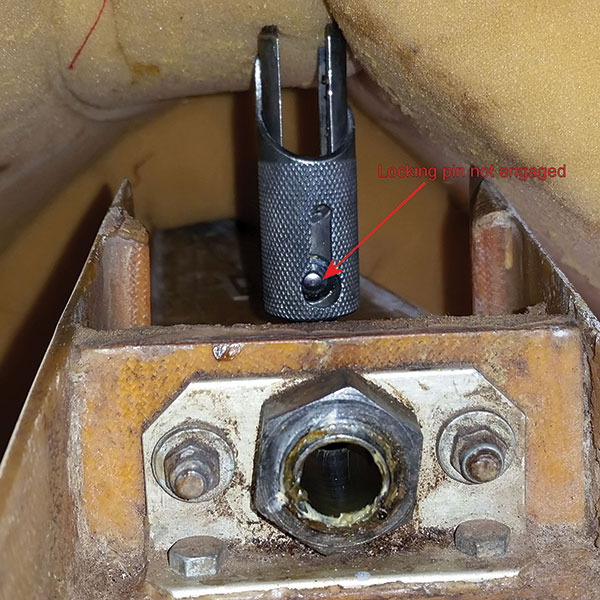 A well known event occurred in 2017 in which an elevator became disconnected in flight:

A post annual inspection evaluation flight was being carried out in a Jantar 3. The aircraft was rigged and a dual check carried out. An aerotow was carried out normally, followed by a straight ahead stall. The pilot then chose to head under a cloud to find a thermal. After flying under the cloud, the nose suddenly dropped and the aircraft accelerated to 65kts. When the control column was pulled back, the aircraft did not respond and it was obvious that there was no elevator authority.

After flying straight and level, the pilot noticed the nose attitude was periodically nodding up and down and the speed cycling between 55 and 65kts. At 1,600ft AGL, the pilot decided not to bail out and chose to attempt a landing. After a wide circuit and long final, the pilot used a small amount of airbrake over the runway threshold. At the touchdown phase, the aircraft entered a nose down phase of the nodding cycle and the aircraft contacted the runway in a nose down attitude at 60kts. The main wheel collapsed and the tail wheel was pushed up into the tail boom.

The pilot reported that they had attempted to damp out some of the pitch oscillation by shifting their weight fore and aft in the cockpit. 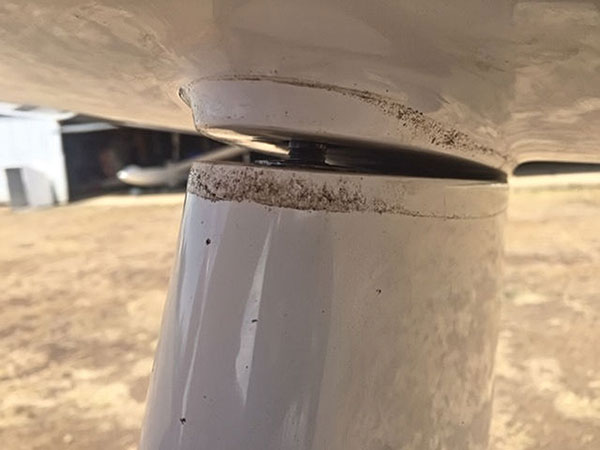 Some flight manuals of flapped sailplanes mention that it is possible to control the aircraft nose attitude by using the flaps in the event of an elevator becoming disconnected. Lowering the flaps moves the centre of lift of the wing aft and will lower the nose. Moving the flaps up into negative will move the centre of lift of the wing forward and will raise the nose. The nose however is still likely to cycle up and down, called phugoid motion, causing speed variations.

One of the lesser known problems caused by a disconnected aileron is that it will have the same effect as the flaps. At low airspeeds the free aileron has more movement, as there is less airflow holding it in position. If the disconnected aileron moves downwards, the aircraft will roll. By trying to counter the roll with opposite stick input, the aircraft will have both ailerons down. This will move the centre of lift aft and the nose will drop. If the free aileron moves up, the opposite will happen. The end result is very confusing for the pilot as they try to keep the wings level while the nose pitches up and down.

There are also reports of structural connections not being secured properly and starting to come undone. In the last month the airworthiness team received two reports from separate clubs for nearly identical problems – the bolt securing the tailplane coming loose. The following is from the more dramatic of the two incidents:

For the third flight of the day a flight review was being carried out on an Air Experience Instructor. The flight was to include spins and both pilots were wearing parachutes. During the aerotow, the reviewing instructor heard a knocking noise from the rear of the aircraft and considered it was from the spin kit. The noise was heard again after release.

The pilot thermalled the aircraft to 3,000 ft AGL and a control assessment was carried out. At the completion of the check, the knocking problem was thought to be with the rudder and a gentle descent with minimum control inputs was carried out. On touch down there was a loud bang from the rear of the aircraft.

On inspection afterwards, it was found that the leading edge of the tailplane could move freely up and down by approximately 8mm. At the time, the tailplane securing bolt had probably only had the barest minimum amount of thread remaining engaged. It is believed the tailplane was held in place by the gap sealing tape until the adhesive became soft and the tape gave way. The aircraft had been rigged after its annual inspection several weeks before.

While it is not clear exactly how the tailplane bolt ended up this way, it is possible that:

- The tailplane bolt was not fully tightened during rigging.

- The spring loaded safety pin for the tailplane bolt may have become deformed over time and was not supplying sufficient pressure to lock the bolt.

Although several Daily Inspections had been conducted, the problems were not found, most likely because the gap sealing tape was effectively holding the tailplane down. Needless to say, if the tailplane had departed the aircraft during the initial climb out behind the towplane, it would have resulted in a triple fatality caused by the glider suddenly diving into the ground and dragging the tail of the tow plane down with it.

When you do your next Daily Inspection, ask yourself the question, How well connected is the aircraft?

Anthony Smith
Chair Airworthiness Department
This email address is being protected from spambots. You need JavaScript enabled to view it.