When the VSA were looking for a club to host the State Championships, now that flying was almost back to normal following the various lockdowns, the Gliding Club of Victoria committee suggested that we could run it. 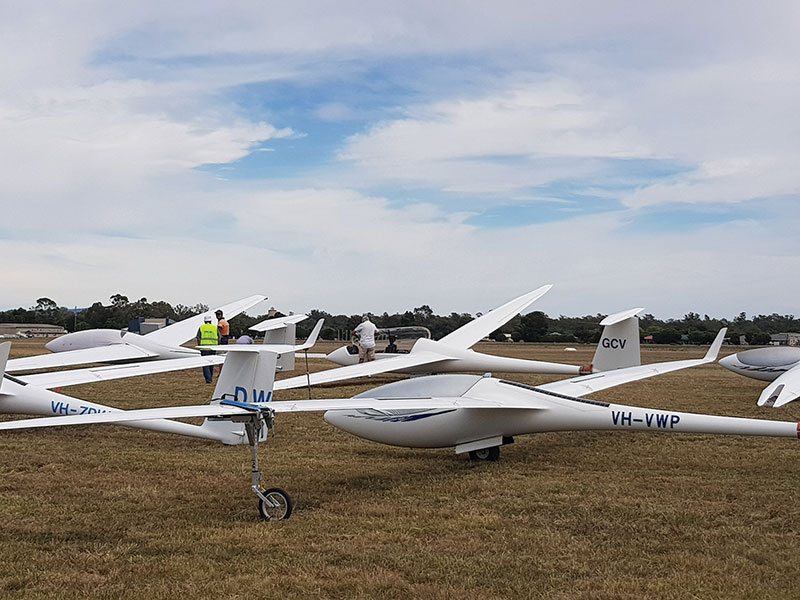 I was just too slow and ended up agreeing to be the Competition Director. The critical rule is that the CD and the Safety Officer cannot fly.

Bruce Cowan was CD for Horsham week in February and wasn’t available to help with the State comps – other than actually flying. Luckily, members of his management team agreed to keep working in their roles at Benalla, so we had Tim Shirley doing the weather forecasts, John Orton setting Tasks and Neil Campbell scoring.

It was easy having a well honed team, all I had to do was speak at Briefing. Fortunately, Gary Cropley agreed to be the Safety Officer for the event, as he is well experienced and capable for that role. 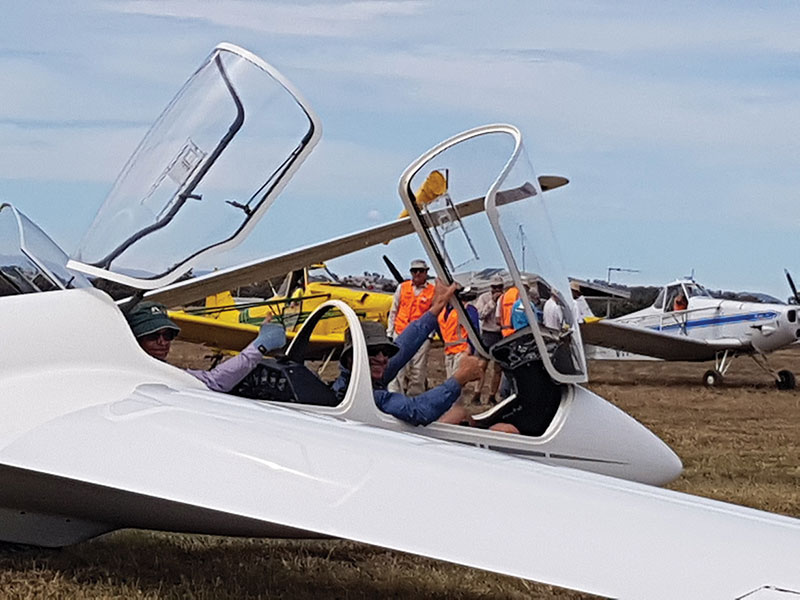 Good Turnout
As it was late in the season after such a delayed start, I initially thought that we would struggle to get many entries. Neil Campbell set up our web page and Rhonda did some promotion on social media, and of course she contacted all GCV members to encourage them to participate.

By the time the competition started we had 21 entries, many more than we had hoped for. We had three competitors from other clubs – Tocumwal, Bendigo and Horsham – plus Keith Willis from Bordertown who just wanted to go flying and volunteered to be the ‘sniffer’ – launching early and providing feedback on conditions so that the launch could proceed.

The practice day was held on Wednesday 3 March with approximately half of the competitors taking part. A short Assigned Area Task (AAT) was set but the weather was less than optimal and no one completed the task. John Orton travelled 104km to achieve the maximum distance. At least it gave us a good run-through of the launch, start and scoring, so we felt well enough prepared to start the competition on the next day. 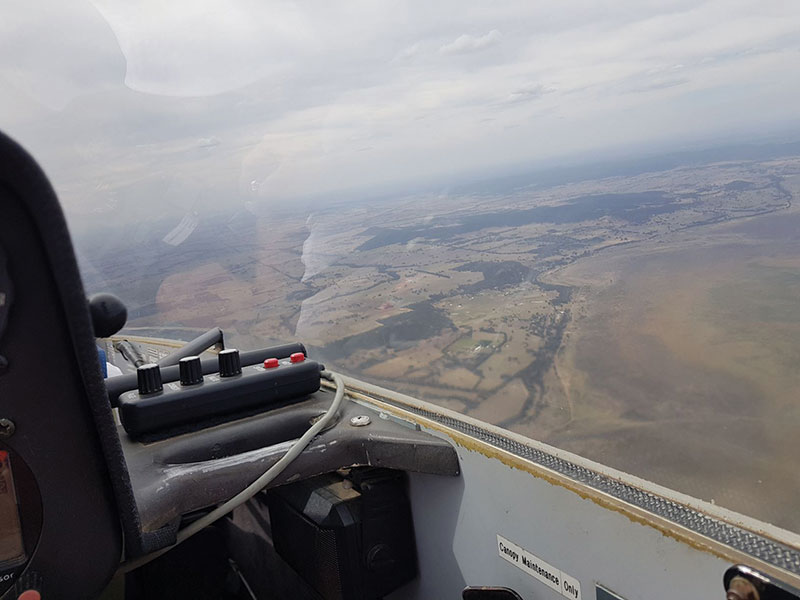 What is an AAT?
Gliding competition is about racing against your fellow competitors to see who can complete the set task at the fastest speed. Originally, tasks were fixed. For example, you would fly from Benalla to Katamatite and then Corowa and come back to Benalla. A fast glider might achieve this flight in 2 hours, while the slow competitors might take 4 hours, meaning that they have to start early and/or finish late when conditions are weak. The AAT sets a time for the task and the competitors fly as far as they can within this time by flying to a series of areas where the scoring system identifies one point in each area to maximise the distance achieved. 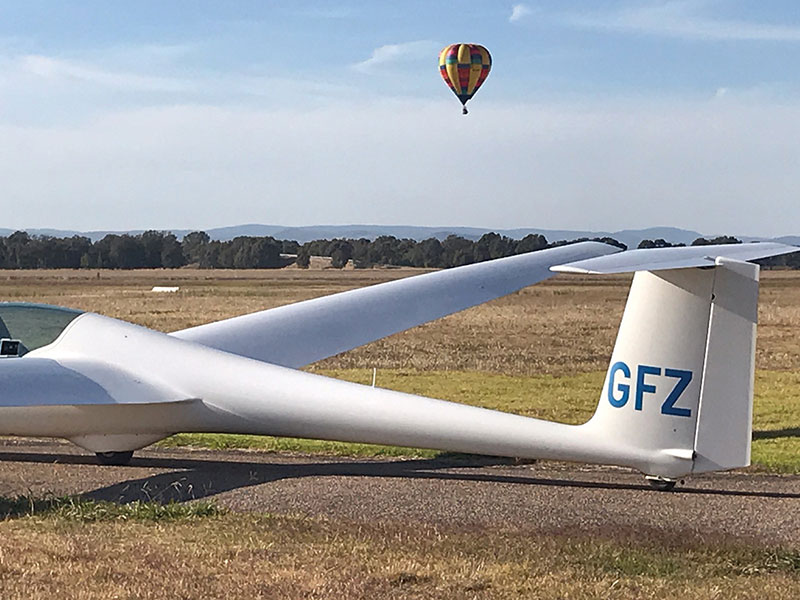 The Flying and Outlanding
The first competition day on Thursday, 4 March was meant to be a straightforward flight but the weather did not cooperate. Three pilots in Ballasted Class made it around, with Tobi Geiger winning at only 74kph, which indicates how difficult the day was, just ahead of John Orton and Arnold Niewand (Horsham). Three pilots in Unballasted Class also made it around with Jack Hart (Bendigo) winning at 59kph with Garry Stevenson and Mark Goodley also completing the trip. This meant that 12 gliders either landed out or used their engine to get back, and 66.6% failed to complete.

Outlanding, typically a safe exercise, is always possible with cross country flying and you get to meet all sorts of people. The best stories often result from experiences with outlanding. Competition flying does slightly increase the chances of outlanding because you get to fly on days when you might otherwise leave the glider in the hangar. Even so, two-thirds of all competitors landing out is a little careless on behalf of the organisation.
In previous weeks we have had lift to 10,000ft and quite a number of cumulus days, but the State comps was consistently blue with climbs to 4,000-5,500ft, and many days where the lift got weaker and lower as a pilots tried to get home into the cool Southerly wind. We have days like that reasonably often, but it is cruel when it happens day after day.

Each of the first four competition days were lowish and generally blue, with the occasional cumulus. Speeds were typically below 100kph, and often below 70kph. The final day was a marked improvement with climbs to 7,000ft. It was a short day with thermals predicted to end at 5pm, and reports indicate that this was the case. So short tasks were set, but were still very competitive. Ballasted Class was fairly well determined before the last task, as long as Tobi did not outland. Tobi won the last day at 116kph to confirm his overall win.

In Unballasted Class the overall scores were still very much in play with podium places up for grabs. Jack Hart won the last day at 92kph, which ensured an overall win. He was just ahead of Matt Woodhouse and Mark Goodley on the day. 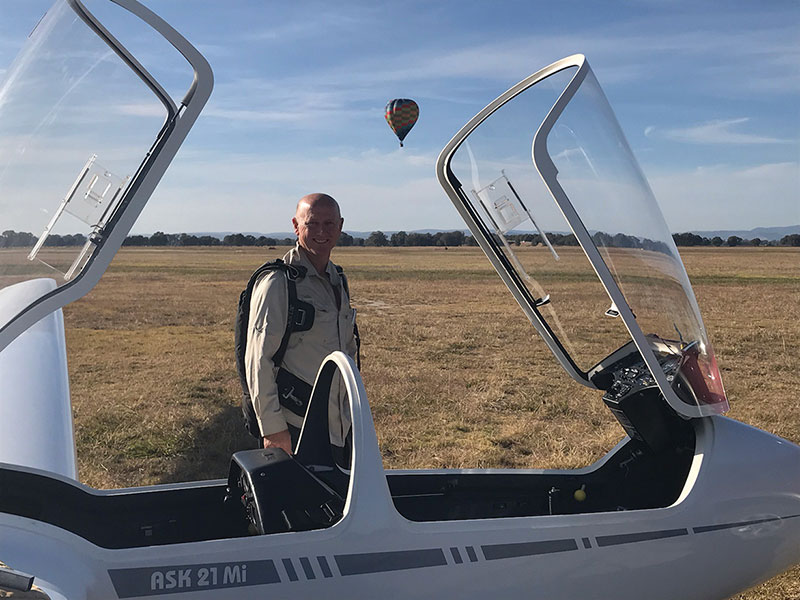 New Competitors
Four pilots were flying their first competition at this event. Flying a comp is not that difficult – the good thing is that someone tells you what the weather is and where you have to fly. By talking to other pilots, you can get good advice on how to plan the flight. The actual flying just takes practice to develop the techniques – some two-seat coaching is a real benefit in developing this. Actually flying the comp is a great experience and all of the new pilots commented on how much they learned over the five days.

On the flip side, many of the remaining pilots were very experienced and skilled. This included Australian team pilots Tobi Geiger, Ailsa McMillan and Bernie Sizer, plus many others with extensive skill developed over many years.

Presentation Dinner
The final night was on Wednesday 10 March and Sue from Absolutely Delicious opened her restaurant which was well attended by all pilots, organisers, ground crew and friends. We spent a very pleasant evening, with Viv Drew (VSA President) closing the championships and presenting the trophies and prizes – a great end to an enjoyable but challenging week.

State Comps and Nationals in December 2021
The 2021/22 State comps will also to be held at Benalla, from Friday 4 December to Friday 11 December – a much better time of year for weather.
glidingcomp.flights/vsa2022/

The Club and Sports Class NationalChampionships will be held a week later from Saturday 11 December to Saturday 18 December, so we should receive a good number of entries for both events.
glidingcomp.flights/cs2021/