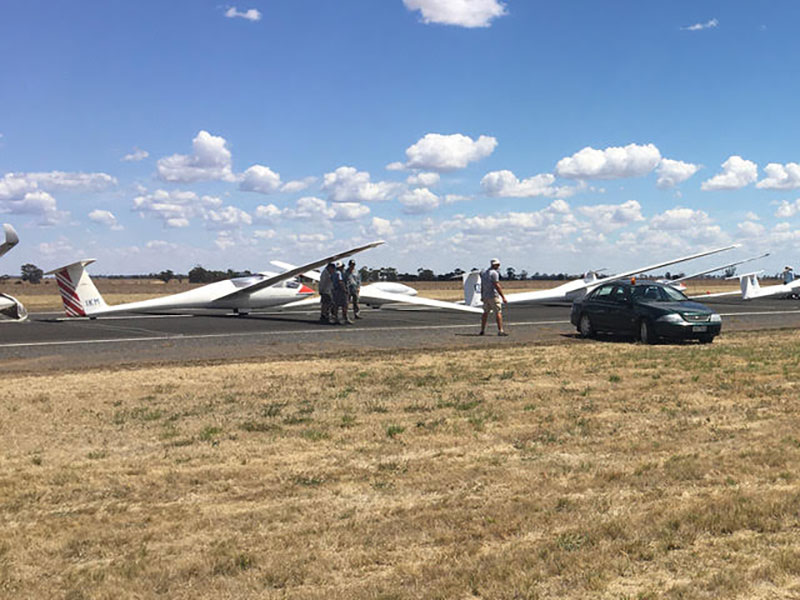 I haven’t had a chance to go to a Horsham Week competition for several years. Although I’ve been a member of the Horsham Flying Club since 1985, I’ve never spent the whole 8 days at the competition. In the past, it was a few days over the weekend and then back to work, but now that I’m no longer working, I’m officially a member with time to spare, so to speak. So, this year I put my hand up to help in any way I could. This article is my view of Horsham Week 2022 from the ground.

First, I’ll give some initial background information to set the scene. The Horsham Flying Club or, as it was known when I joined in 1985, the Wimmera Soaring Club has been running an 8-day gliding competition known as Horsham Week at Horsham aerodrome since 1968.

Pilots and crew come from the north, south, east and west to attend. The competition is well supported by the larger Victorian clubs at Benalla, Bacchus Marsh and Bendigo as well as a few smaller clubs. Many pilots return year after year including at least one who has attended 52 times, while others have attended more than 40 times. 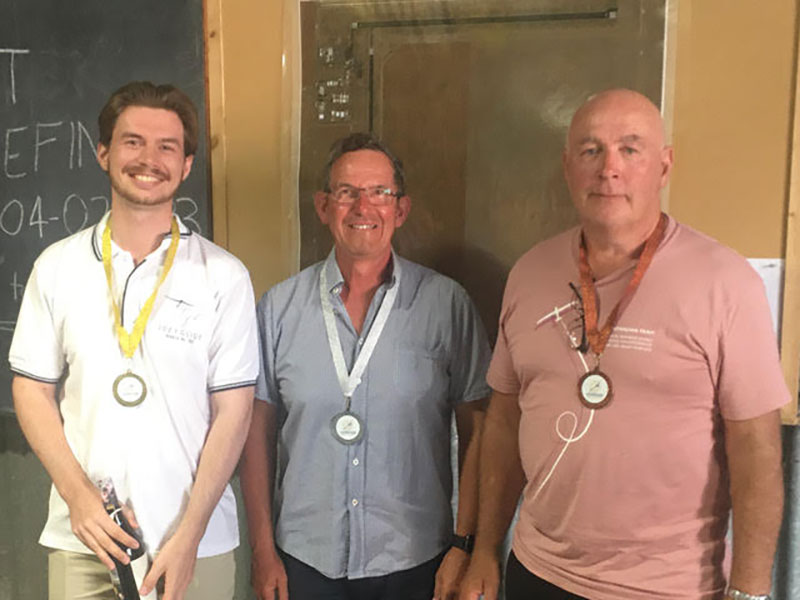 Consistent Comp
Something keeps bringing them back. I feel consistency is the key. It takes place every year in the first full week of February from Saturday to Saturday. It is well run, the weather is mostly good, but not always so – it is gliding after all. The paddocks overall are enormous, almost turning the area into one big airfield, which makes it safe. It has a very congenial atmosphere, as everyone helps each other out on the field, and it’s very social, so it’s fun. It’s great for beginners, yet still challenging for those with years of competition experience.

But it’s not always perfect. Sometimes it rains, sometimes it blows, it’s nearly always hot and sometimes it can be a bit of an anticlimax. Take 2021, for example. Midway through the Day 7 launch, the State Government announced that Victoria would go into lockdown at midnight that evening. The launch was halted, all airborne gliders were called back and everyone packed up and cleared out in a few hours.
So, Horsham Week 2022 had to make up for the letdown of 2021, and come through for all those involved.

The Daily Routine
A good number of pilots came early and attended the annual coaching week that precedes Horsham Week itself. There were just on 30 gliders in attendance for the week, although not all flew the entire week. There were nine gliders in Open/18 metre Class. Ten gliders made up Standard/15 metre Class, and a further 11 entered Club Class. Gliders ranged from a Nimbus 3, to a Ka6. Four tugs were available and launched all classes in about 75 to 90 minutes each day.

Conditions were very good for the first four days of the competition with long flying days. Midweek the conditions eased and the wind increased, leading to tougher flying conditions. The forecast of weaker thermals on the Friday led to the one non-flying day of the week. On the final day the conditions proved better than forecast and all classes completed their assigned task with time and height to spare.

A daily briefing took place each morning at 10am, with the announcement of the winners from the previous day and the presentation of a bottle of wine as a daily prize. The weather briefing would follow, and then the day’s task would be announced and marshalling details distributed. Pilots would then head off to prepare their aircraft and themselves. At the appointed time, they would ‘elephant walk’ their gliders down the strip for gridding and the eventual start of the launch. 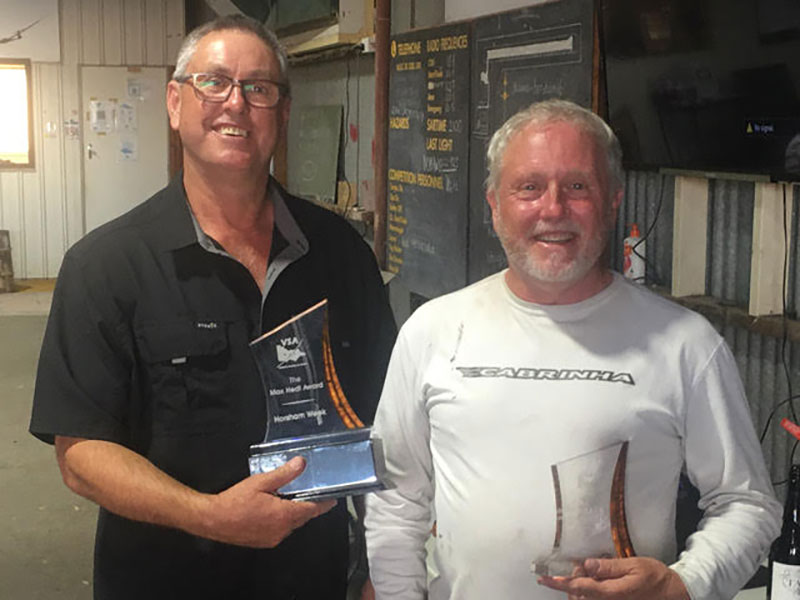 Morning Talks
The daily briefings were also used to share short talks to help improve the running of the competition. Terry Cubley gave a talk on competition finishes and how landing long on the operational strip could ease congestion and keep most of the strip available for following gliders to land. This talk was backed up by visualisations displayed on a large television screen for all pilots to view.

There were few outlandings during the week. Jack Hart gave a short presentation on his decision-making process, choice of paddock and analysis of hazards in relation to his outlanding. This was another informative talk and much appreciated by those in attendance.

Then Neil Campbell delivered a briefing on the use of the lowcrop.aero service to automate outlanding reports. It gives pilots the ability to make fast outlanding reports via a smart phone without waiting for a phone line to be available. The service also links directly to GPS navigational guidance services like Google Maps to assist retrieval crews to get to their pilot. The use of lowcrop.aero is in its infancy at Horsham Week and will be expanded in future competitions. 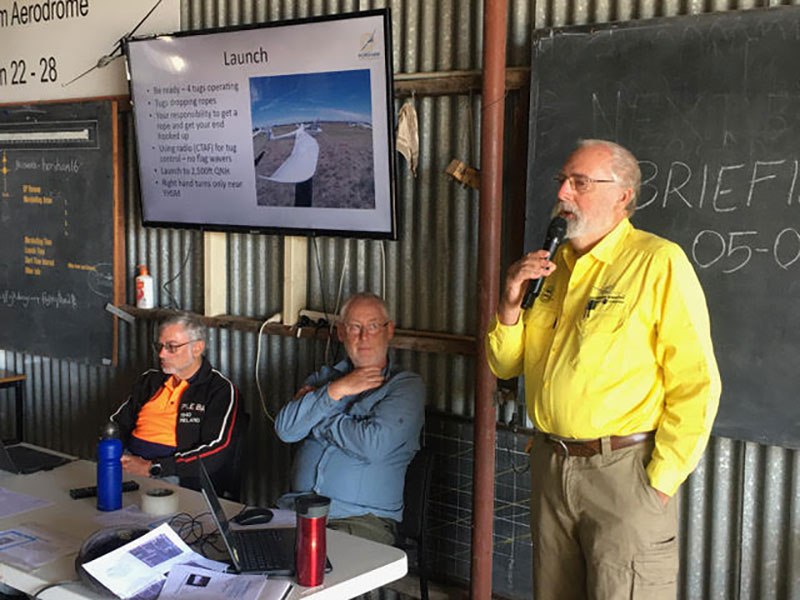 Well-Connected
My role out on the field was to help with gridding, getting pilots to sign off on the one day that the task was changed from A to B and make radio calls in relation to class start times. After they launch, ground crews tidied up, and collected all the tow ropes in preparation for the next day.

Horsham Week allocated a rope to each glider, which is dropped by the tow plane after landing. This means no more running on the field chasing ropes. You just take a few steps up to the tug’s tail, attach the tow rope and the tug-glider combination is ready to go. Pilots from the back of the grid come forward to help those at the front. Compared to when I first helped at Horsham Week, fewer field crew are needed to get the fleet in the air.

What was even more noticeable to me, after not attending Horsham Week or any other gliding competition for a while, was the ability to follow gliders out on task via websites such as ‘Glide and Seek’. In the past, gliders were observed setting off on task early in the afternoon and returning later in the day to then finish and land. What they did and where they were out on task remained a mystery.

Now, everyone with a smart phone, an Internet-capable tablet or a large screen television attached to a PC can follow the course of the task through the day. It seemed funny to see people looking down at their devices, rather than up into the sky to see the progress of gliders on task or as they finished.

The Winners
Over seven flying days, some 30 gliders flew over 60,000km and spent more than 538 hours on task to determine the winners of Open/18m Class, Standard/15m Class and Club Class.

Club Class winner was Jaroslaw Mosiejewski in a PIK 20 B on 5374 points. In second place was Steve Jinks in a Mosquito on 4814 points, and David Meredith came in third in a Jantar Std 2 on 4660 points.

The winning pilots were presented with medallions at a dinner attended by more than 50 people on the evening of Saturday 13 February. A presentation of flowers and movie passes were made to the catering team, who kept everyone fed during the week. The Horsham Flying Club also presented wine to the core competition organisers – Selwyn Ellis (Competition Director), Tim Shirley (Weather Forecaster), Neil Campbell (Scorer) and Jarek Mosiejewski (Task Setter). Thanks were also expressed to Tug Master Mark Griffin, Treasurer Chris Thorpe, Field Manager Michael Sudholz and the Safety Officer PK.

Special Recognition
Selwyn Ellis presented the annual Max Hedt Award to Graham Adams of the Gliding Club of Victoria. The award was given in recognition of his contribution over the entire competition, his willingness to help when not flying and interacting with other pilots and ground officials to improve his knowledge and skills as a competition pilot.

Each year a Turkey Trophy is presented by a representative of the Gliding Club of Victoria to someone who does ‘something of note’ during the competition. There are always several nominations, and this year was no exception. This year, Terry Cubley joined the alumni of the Horsham Week Turkey Trophy. Terry was presented with the trophy by Shaun Driscoll, who first initiated the award many years ago.

With those final words, the Horsham Flying Club invites all glider pilots and those interested in gliding to again assemble at Horsham Aerodrome on Saturday 4 February 2023 for the 57th running of Horsham Week.