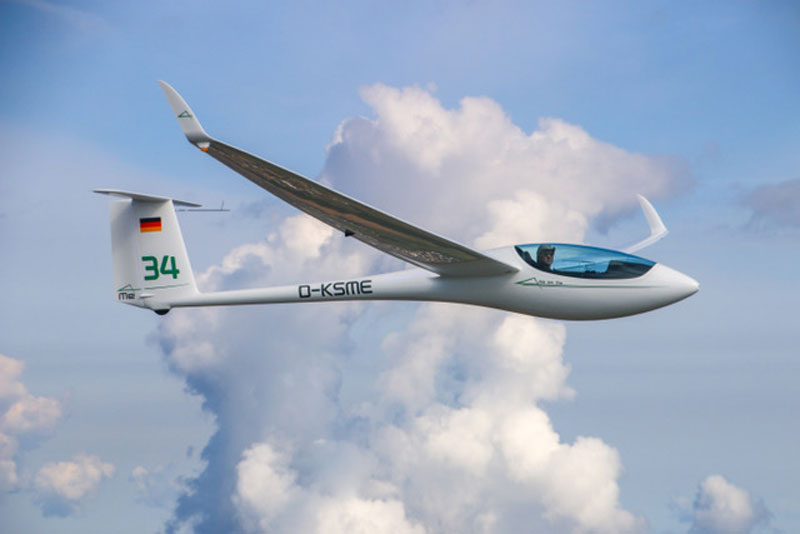 It may have taken a little longer than expected but, on a perfect late summer’s day in Germany, the Schleicher development team assembled their latest creation on the tarmac next to the short airstrip behind the factory. While Paul Anklam, the main designer of this exciting project, conducted the preflight inspection he received a reassuring pat on the shoulder from his boss, Uli Kremer. Then everything happened rather quickly.

Paul made himself comfortable in the cockpit before taking a launch behind the company-owned tug for an intensive check flight of the airframe. When everything worked as expected Paul landed, lined up again, raised the motor and just a few moments later he surprised the spectators when the new glider rolled onto the bitumen runway with only a slight buzzing sound.

The initial buzzing soon increased when full electrical power was applied but the unusually low noise level pleasantly surprised the bystanders. Initially, the new bird advanced a little hesitantly but then accelerated quite rapidly along the runway. After only 220 metres it had clear air under its main wheel for the second time, but what the spectators saw next was a quite surprising. The glider climbed away very steeply until it was neither audible nor visible. 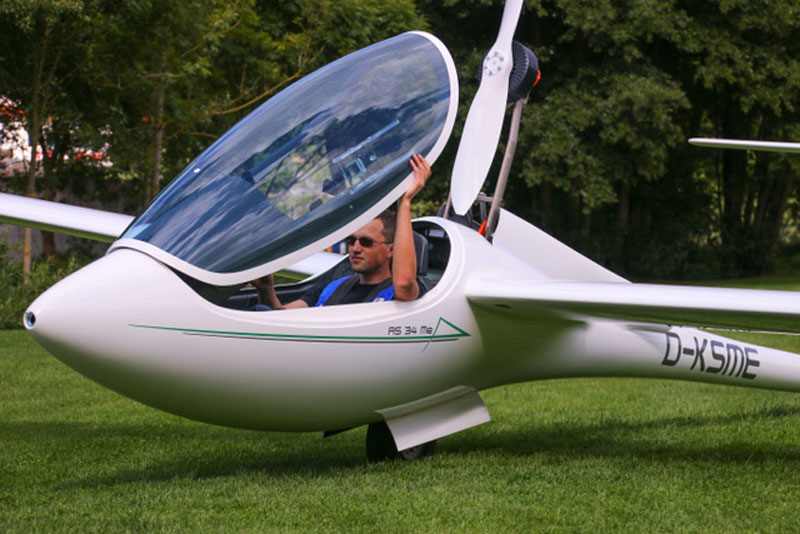 While waiting for the aircraft to return, the Schleicher MD let bystanders in on his thoughts behind this project. Uli Kremer remarked, “The introduction of an aircraft like this has long been overdue. Our aim was to produce an electrically powered self-launching glider that allows totally independent operations and take offs without any helpers.

"Luckily, some of the basic research had already been conducted during the development of the two-seater ASG 32 El. The trouble-free operation of that glilder in the hands of clubs has given us the confidence to adapt this technology for a self-launching single-seater."

However, the ASG 32 El is a much larger glider with a maximum all-up weight of 850kg. Therefore, it is not certified as a self-launcher, but even at this weight this glider achieves a climb rate of almost 1.5 m/s (2.5 - 3kts).

The size of the ASG 32 made it possible to put the batteries in the engine bay but this proved impossible with the more slender AS 34 Me fuselage. Therefore the 8.6 kWh battery pack consists of two ‘sticks’ that slide into a rectangular enclosure within the inner wing panels. Both sticks consist of individual cells, which are all wrapped in a sheet metal cage for safety reasons.

The connectors between the individual cells act as fuses, just in case a short circuit occurs as a result of mechanical damage. This limits battery damage to only a few cells and enhances safety even further. For inspection purposes both battery sticks can be easily removed and reinserted.

“Initially, we were looking at integrating the battery charger into the airframe but in the end a fully automatic external charger was decided on,” Uli said. “It is plugged into the charging socket located in the aircraft’s luggage compartment, right behind the pilot’s headrest. For battery charging in a trailer, a corresponding wiring harness is available on request.

“The charger is designed for a standard 220 - 240 Volt power outlet and can recharge a totally flat battery pack within 4 ½ hours. While doing so it also tops up the 12 Volt battery for the power plant electronics. However, we believe that only a fraction of the available battery power will be used on any given day and therefore we opted for a selectable charging current via the panel mounted motor instrument. 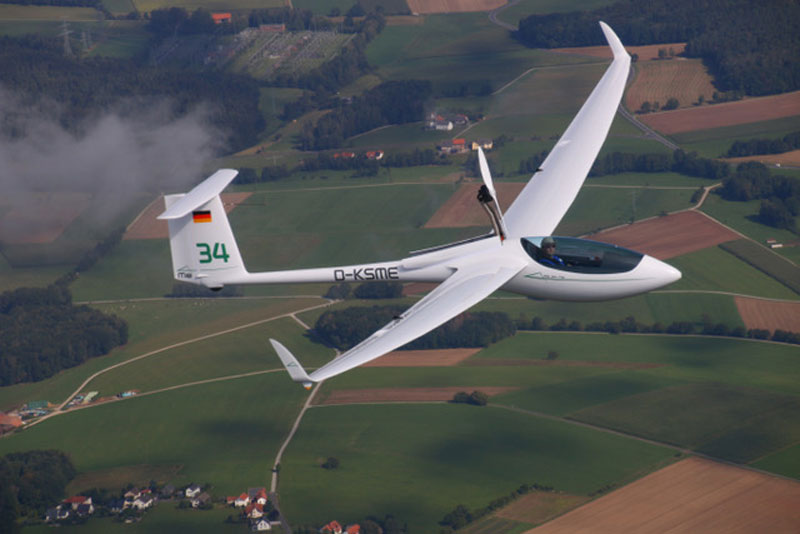 This was done for two reasons. First, it ensures trouble-free charging when less than 15 Ampere of electrical power is available and second, it allows for a more gentle battery top-up by selecting a lower charging current.”

The battery manufacturer believes that the nominal battery capacity is fully maintained for at least 300 charging cycles (defined as battery empty to battery full). This corresponds to approximately 100 hours of engine running time and even at an above average motor usage of 10 hours per year, a reduction in battery capacity would hardly occur for at least 10 years. The company needs to gain a lot more practical field experience before they can provide more definite data but even if the batteries gradually lose some of their storage capacity after 10 years it doesn’t mean that they need replacing. 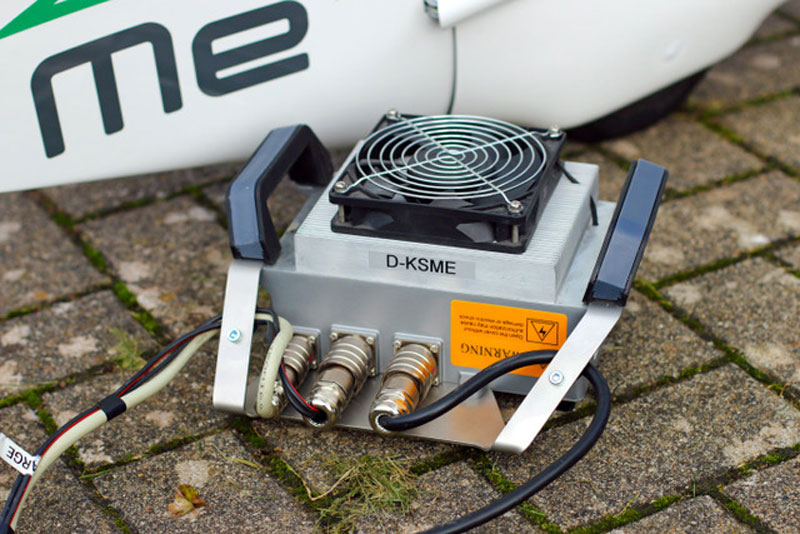 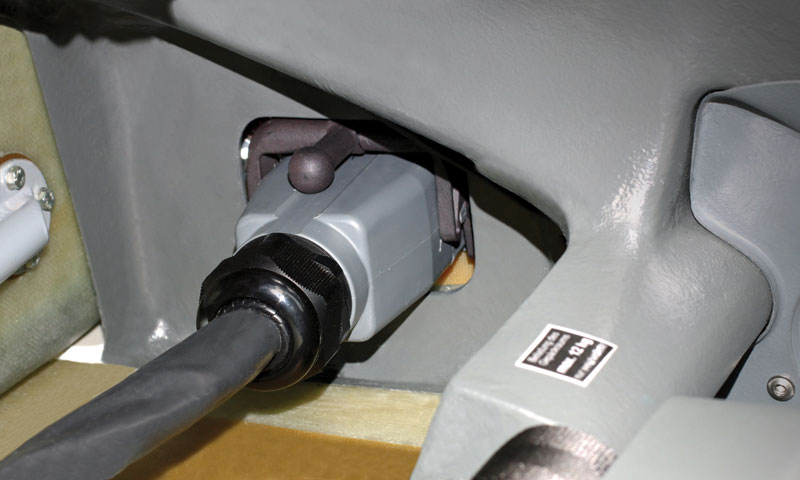 “I think the biggest advantage of this new technology is the vast reduction in maintenance requirements,” said Uli. “The EMRAX motor has no prescribed overhaul requirements other than a mandatory replacement of the main bearing after 500 operating hours. The propeller was especially developed for this aircraft/power plant combination and comes with a TBO of 1,000 hours. It means that a few drops of oil on the retraction linkages is the only maintenance required at annual inspections.

“Compared to conventional combustion engines this is quite a step forward and, if you ask me, it can also be safely assumed that the long term total operating costs will be roughly on par with conventional petrol engines.” 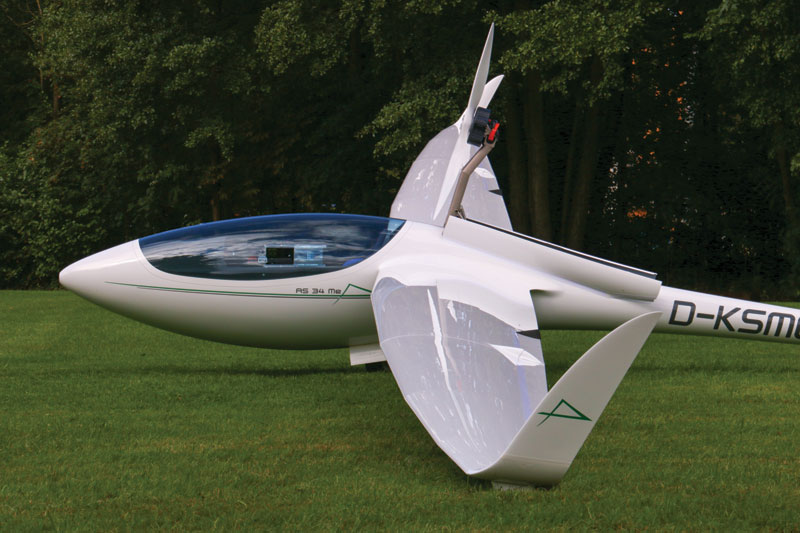 Uli Kremer’s question and answer session was interrupted when the new bird was spotted again over the circuit area. As expected the pilot was bombarded with questions after his landing. “I wanted to demonstrate that the performance data is not just based on theoretical figures but is quite achievable in practical applications,” he said. “My take-off weight was almost exactly 500kg and I only turned the motor off at 3000m (10,000 ft) although there was quite a bit of power left in the batteries.

“I still need to evaluate all the data but I think we can safely assume an average climb rate of more than 3.5m/s (7kt) at take-off power. For the rest of the climb I went back to the max. continuous power setting of 25 kW but the climb rate was still 2.7m/s (5kt) on average. Our predictions in terms of range under power can also be regarded as rather conservative. Even after a normal self-launch, a range of 130 km should still be possible. If you have a place in a hangar, you can mothball your trailer with an aircraft like this.” 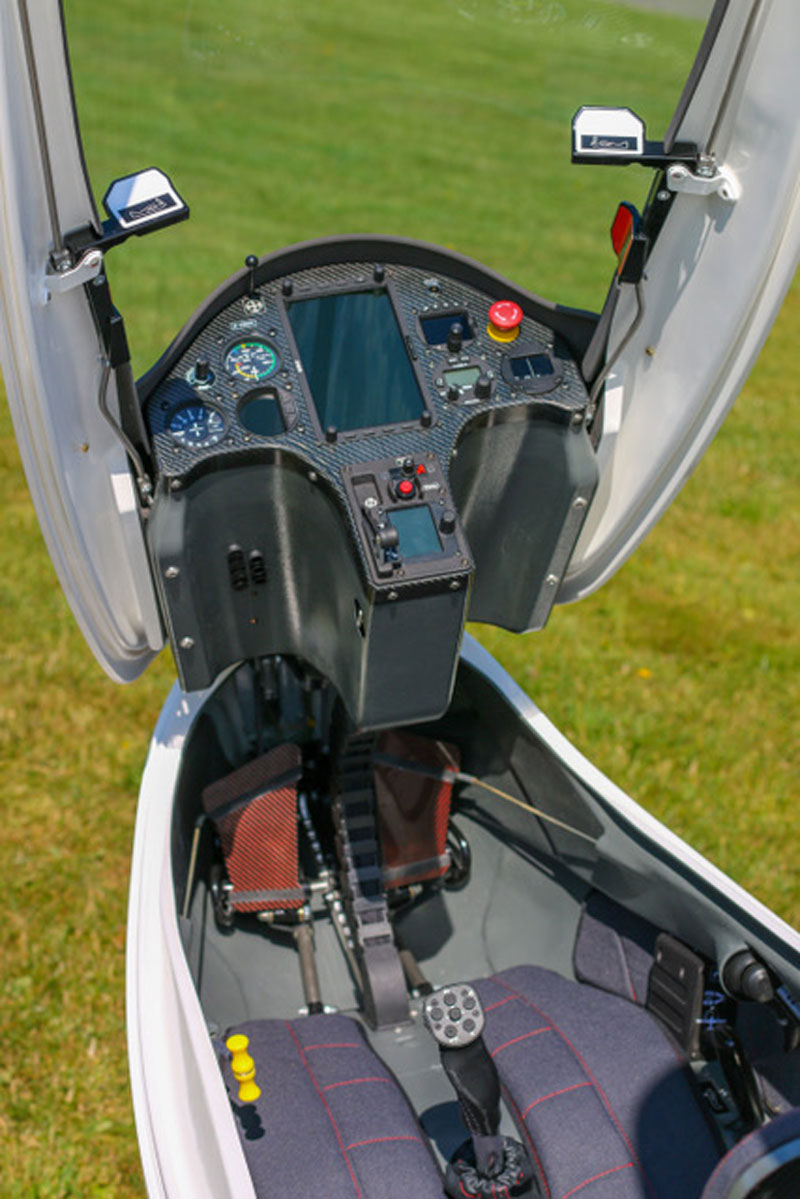 “We are especially proud of the simple engine management,” Paul elaborated further. “Moving the power lever is just about the only thing the pilot needs to do. Lifting it up one notch extends the propeller in just 12 seconds and only then can the starter button be activated. The remaining travel on the throttle lever is reserved for power selection. On take off it can be as high as 35 kW (47 hp) but it should be reduced to 25 kW (34 hp) for the rest of the climb. 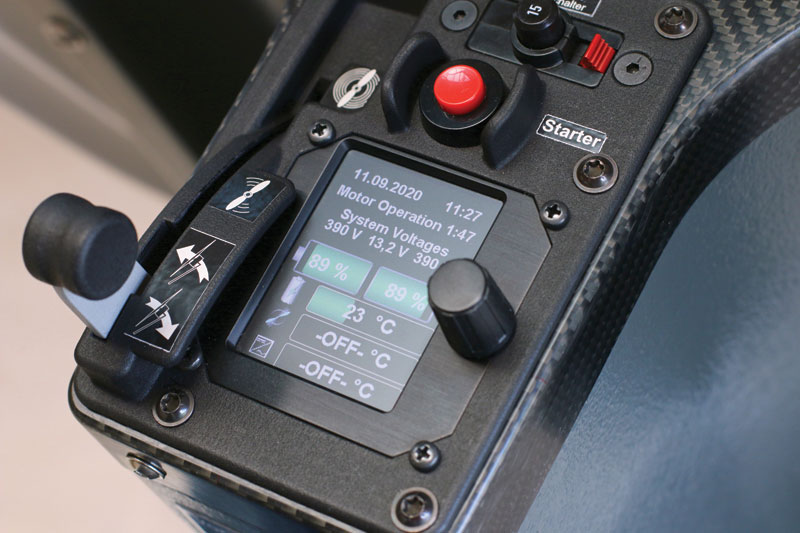 “After moving the power lever into the bottom position, the motor stops instantly and the propeller automatically rotates into a vertical position before it retracts. All of this happens in just 15 seconds and without any further pilot input. In short, the handling of the motor could not be simpler and the inbuilt digital display of the power plant instrument provides a constant readout of all relevant data.”

The BMS (battery management system) forms the kingpin of the safety system and ensures that the permissible battery temperatures remain between -20°C and + 60°C and that motor temperatures and charging currents always stay within safe limits.

Paul said, “Should a low battery situation arise, a warning occurs well before the BMS automatically begins to reduce power and hence prevents premature battery aging. Put differently, the BMS completely eliminates any concerns over an incorrect in-flight handling of the power plant.”

“Please let me add to that by giving you some information on the airframe,” said Uli Kremer. “We developed the AS 34 Me and the AS 33 simultaneously as a long-term investment into the company’s future. Both fuselages are largely identical and both aircraft feature further refinements to Gerhard Waibel’s award winning safety cockpit. This includes modified rudder controls for pilots with extra large feet, a modified instrument panel, in-flight adjustable backrest and further crashworthiness advances. The permissible cockpit load is between 70 and 115 kg and the generous size of the cockpit allows even tall pilots comfortable long to very long flights.”

“What about the weight of the batteries?” one of the observers asked. “That’s a valid question,” Uli Kremer replied and remarked, “The empty mass of a fully equipped AS 34 is largely dictated by the weight of the batteries. In 15m configuration it is 390kg and 405kg when 18m wing extensions are fitted. In both cases the wing area is slightly larger compared to other Standard Class models but this is definitely an advantage given the heavier power source.

For this reason we have also improved the effectiveness of the airbrakes. The maximum all-up weight with 18m wingtips is 575kg resulting in a wing loading of 48.4 kg/m2. In 15m configuration the maximum wing loading is 50 kg/m2. Finally, new CFD (Computational Fluid Dynamics) designed winglets were integrated, which look very similar to the ones fitted on our latest AS 33 flapped glider.” 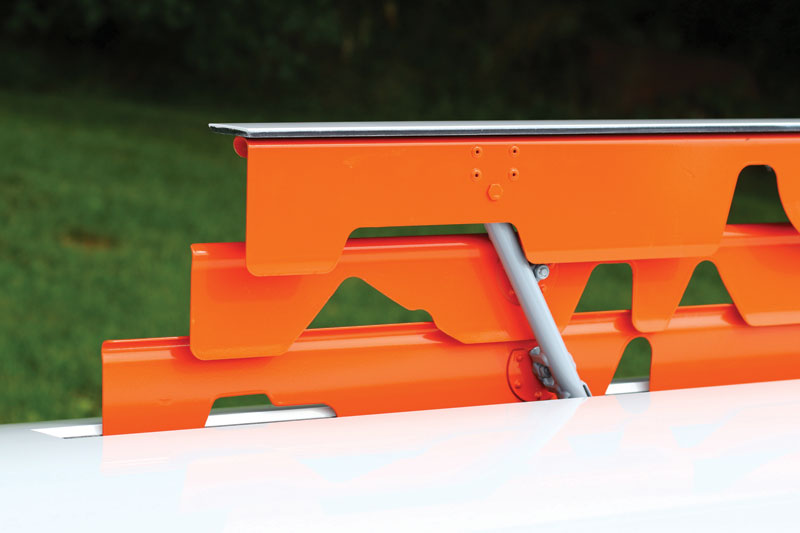 Because each battery stick weighs about 33kg, the inner wing panels tip the scales at almost 98kg, which makes the use of a rigging aid advisable. In comparison, the outer wing panels are very lightweight and weigh only 12kg and 19.5kg respectively. After their removal, the wingspan comes down to only 10.5 metre – perhaps small enough for a corner hangar spot.

The prime objective behind the AS 34 development is to provide maximum simplicity for club pilots and aviators looking for relaxed cross-country flying. Therefore they have integrated wingtip wheels for unassisted take offs but refrained from including a water ballast system in the standard package. It is, however, available as an optional extra, and the same applies to a tail tank.

Bug wiper garages are not on the option list either but a bug wiper system can still be factory fitted. Solar cells on the engine bay doors are also not found on the option list as the standard 10 Ah battery for the avionics is constantly topped up by the main engine battery - another task the owner doesn’t need to worry about.

Uli said, “In summary, we have now added a electrically powered self-launching Standard Class aircraft to our product range, which is primarily designed for pilots who prefer a simple to fly, simple to maintain and simple to operate aircraft on the ground and in the air. As long as they can find a power outlet at the end of the day, they can expect a fully operational aircraft when next they arrive at the airfield.

“Our early customers regularly confirm that totally independent operations, even in remote locations and away from any gliding infrastructure, rank high among the AS 34 Me’s attractions, apart from its excellent performance. Therefore, it’s no wonder that the initial response to this new glider is very encouraging indeed.

“In the past, many gliding clubs have stayed clear of gliders with sensitive combustion engines for fear of engine management issues and the threat of high maintenance costs. Fortunately such concerns no longer exist with electrically powered gliders and therefore we have already received firm orders from quite a number of clubs. We are in no doubt that the new AS 34 Me will help greatly to increase the attractiveness of our beloved sport in all corners of the globe. Two of these gliders are already on order by customers from Australia.”