Many pilots have been patiently waiting for a high-performance, versatile, easy-to-fly self-launcher. Finally, JS is wrapping up the development of this cutting-edge sailplane - the JS2 Revenant. 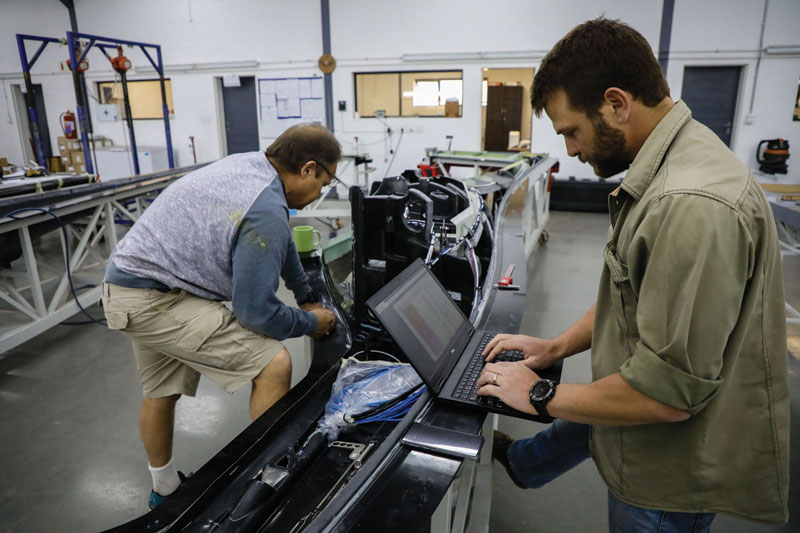 Attie Jonker and AP Kotze verifying the position of parts from the CAD models.

Many pilots have been patiently waiting for a high-performance, versatile, easy-to-fly self-launcher. Finally, JS is wrapping up the development of this cutting-edge sailplane - the JS2 Revenant.

The JS design team aimed to meet most pilots’ desires in a self launcher – great handling, good reliability, a powerful engine to take-off from short grass strips and with the endurance to travel under power to nearby mountains. These wishes are captured by the team in a slender airframe, providing that ultimate gliding performance required to challenge world records and win contests. 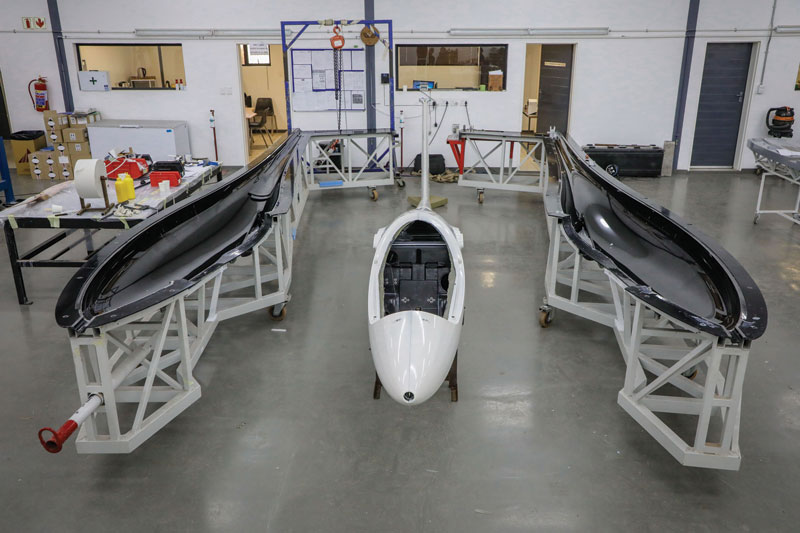 First prototype JS2 fuselage out of the moulds.

The JS design philosophy is based on finding the right compromises, taking into account all of the aspects required for a superior product and balancing the compromises to achieve the most sought after glider in the world.

The plan was to release the JS2 self launcher in 2017 and we were well on track with our plan. However, we re-evaluated our strategic plan based on market research and our risk assessment indicated a larger long term market share if we restructured our product range carefully. As a result, we fast-tracked the JS3 and defined and scheduled the development of our future product range.

This decision was, in a way, a hidden blessing – our design team gained invaluable experience, and more formal design processes were introduced based on Aerospace Standard AS9145 for the Product Development Process (PDP) through the use of Production Part Approval Process (PPAP) methodologies.
Every part, every fastener, every wire, every fitting and attachment was designed and imported to the final assembly model to check for possible integration oversights. DFMEAs (Design Failure Mode and Effects Analysis) were performed on most critical components and various design change iterations were conducted to lower the risk probability numbers before moving to the prototyping phase.
“Following a formal design process is time consuming but the advantage is that industrialization and certification is much faster,” JS engineering manager AP Kotze explained.

PERFORMANCE is Not Optional

The JS2 may be regarded as a product aimed for the larger recreational market. Nevertheless, Jonker Sailplanes’ unwavering dedication to the ultimate performance and aerodynamic excellence resulted in the creation of the Revenant.
Using the proven high performance JS1-C airfoil sections, combined with a new optimised fuselage design, the JS2 is not only expected to be highly competitive in the 18m configuration but should also be a serious contender in Open Class.
“The JS2 has a slight performance advantage on the JS1-C, which was already a great performing glider with a best L/D confirmed by the Idaflieg of 63:1,” said Dr Johan Bosman. 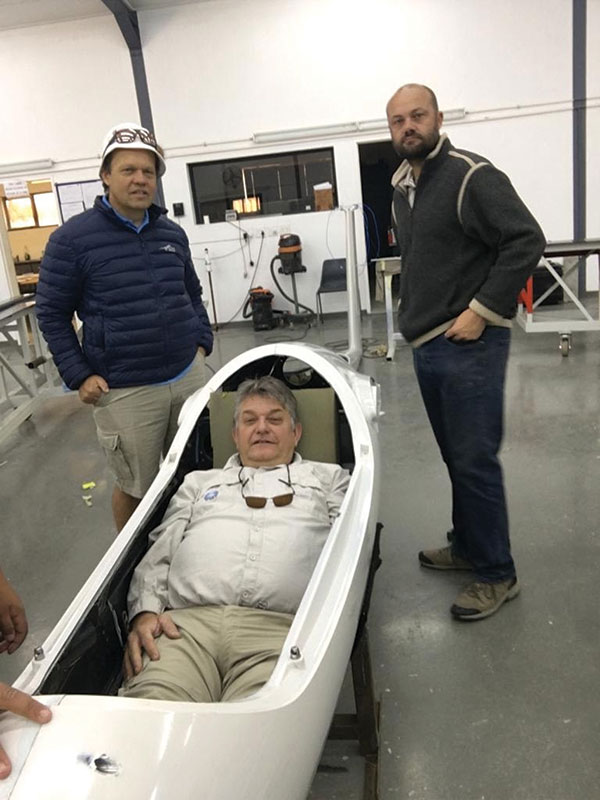 Easy handling and comfort is becoming a critical customer requirement.
The cockpit architecture is based on the JS3 cockpit with increased width in the shoulder area. Pilots up to two meters tall should not have any comfort issues.
The instrument panel size has been increased and moved closer to the pilot to improve the ergonomics. A wide lip on the combing improves instrument readability in bright conditions.

Rudder pedals are adjusted electronically, and the seatback is adjustable in flight with the aid of a lockable gas strut.
JS gliders are renowned for their great handling qualities, but feedback from customers suggested that increased rudder authority in the 21m wingspan should be considered. The design team accepted the challenge and designed an improved rudder system with 40% higher efficiency and a significant reduction in pedal forces.

Control forces were modelled and are expected to be light and balanced, giving the typical pleasant JS handling. “Female pilots won’t struggle to lock the air brakes or retract the landing gear, and will definitely not get tired with high control forces, even when flying out of trim,” Uys promised.
Water filling is done through holes on the upper skin, and one-way valves prevent water from syphoning when one wing is on the ground. The left and right main tanks are mechanically connected to prevent asymmetrical dumping with electrical activation 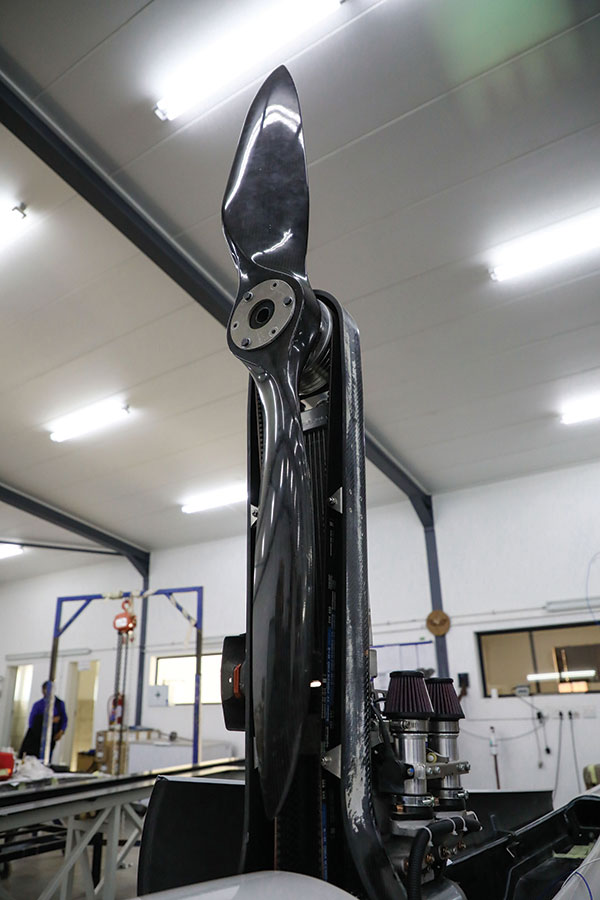 Reliable Propulsion is a Must

A self-launch system was developed around customers' non-negotiable requirements – reliability, performance and ease of use.
The engine selection process was no trivial task. As only EASA certified engines were considered. Just two engines made the primary specification, the Astro rotary 50hP EA50 and the 68hP 2-stroke Solo 2625 02i Neo.

Although the rotary engine is compact and runs with very low vibration levels, the more powerful Solo engine was selected to guarantee safe take-offs from the typical European grass strips.
The design team was faced with the major challenge of managing the vibrations generated by the engine. After vibration modes were modelled, four shock mounts instead of the normal three were designed to optimise protection to the fuselage and surrounding components in the extended position. The V-belts concept instead of a tooth belt was selected to damp the engine/propeller vibration modes.

Fuel injection was selected to enhance reliability and performance in various atmospheric conditions. SOLO developed a new fuel injection system with significant improvements in redundancy. Their latest design, the 2625 02i Neo, resulted in a very elegant, reliable system, ideal for the JS2.

JS designed a purpose-built propeller with a slightly reduced diameter and lower aspect ratio. Power curves were selected with sufficient static thrust but still able to prevent the engine from overspeeding at airspeeds up to 120km/h. The ground static tests suggest that the climb rates at maximum weight will be very impressive – a major safety requirement
The fuel system consists of a 12-litre main tank in the fuselage, and 2x12 litre integral wing tanks. To reduce the probability of fuel leaks, JS selected modern automotive industry standards by incorporating submersible fuel pumps for the fuel supply.

A venturi pump, as used in large airliners, is used to transfer fuel from the wing tanks to the main tank. This venturi pump is a mechanical pump with no moving parts and an extremely low probability of failure.

The Engine management system, developed by LXNAV, is designed for minimum pilot workload. A 57mm colour display unit has a three-position switch to control the pylon position and enables the ignition. A start button on the stick can only be activated when the engine is fully extended. Throttle control is provided by a mechanical lever positioned on the left hand side of the cockpit console.
Retraction happens automatically. A mechanical prop brake handle is provided to stop the propeller and a mechanical activated finger-type prop-stop advances in the propeller’s path before retracting to a low-drag cooling position.

Provision is made for an emergency mode to enable the pilot to retract /extend the propeller in case of system failures or if logical conditions cannot be met. 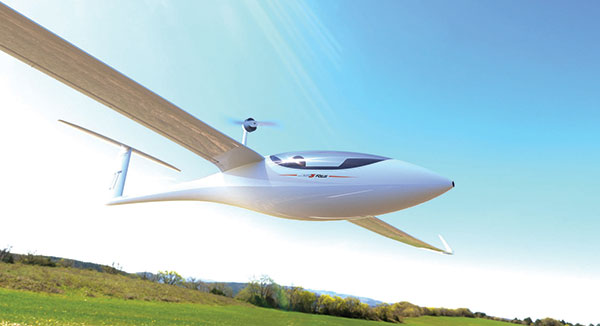 The completion date of JS’s most modern sailplane is approaching fast.
JS2 development challenges have been overcome – consequently the JS2 prototypes are progressing at an increasing pace. The fuselage was demoulded in August, the engine system and doors are installed and all mechanical systems function according to design. Final design inspections are also completed on the fuel system and the electrical installation is expected to follow shortly.
The team is confident that the maiden flight will be conducted in the next couple of months.
This highly desirable recreational self launcher will definitely experience increased demand for the planned JS-5, a new Open Class glider based on the JS2. We have no doubt the time invested to amend the JS2 fuselage design to accommodate the big open class wings was time very well spent – more information on the JS5 will be released in 2021.

JS silently engaged in the electrical propulsion area. The first JS3 with FES is currently in construction in Slovenia by Luka Znidarsic from LZ Design, who did ground-breaking work with front electrical sustainers. Luka has just tested his first retractable electrical system.
But JS not only invested in the FES system. Well-known aircraft engine producer, SOLO Aircraft Engines, was the major inspiration behind the retractable electrical propulsion system. SOLO used the JS3 fuselage to model their sustainer design in the “smallest possible modern fuselage”.
JS and SOLO studied the maximum performance of the system and realised self-launching may just be possible. The concept of having not only a sustainer, but also a limited self-launcher with removable batteries, is very exciting. To enable this performance need, the battery capacity was increased to 9.4 kWh running at 400V and a larger, more efficient propeller was matched with the motor torque curves to minimise losses.
“The prototype is currently in the final stages of production. We have tested the pylon retraction system with the aid of rapid prototyping, and we are busy producing the E-system parts. We plan to start test flights in the very near future,” Uys Jonker said.

The most recent developments in Standard Class design are most probably the Advantage and Streifeneder’s Albatross, designed by Loek Boermans in the early part of the century.
JS was still unsure if a market really exists for Standard Class. Their concerns were put to rest by a customer survey launched on their marketing platforms. As Uys explained, “It is important to have the voice of the customer early in the design phase, to ensure we specify a product meeting our customers’ needs. We need to understand who has an interest in Standard Class, what configurations are important and what power plants must be designed in the structure.”
Although any new glider is expensive to develop and certify, the JS team is planning to price the basic JS4 more attractively with reduced options.

JS’s vision is to produce and sell the most sought after sailplanes in the world. Not only does our design team continuously improve in order to design world leading products, but we have established partnerships with our agents and support centres to support our brand globally.
After Sales Service is one of the critical components to meet customers’ expectations. JS’s product support plan is aimed to improve service and to address identified deficiencies.
Commonly needed spares have been identified and stored at various centres around the globe. A Service Level Agreement is being rolled out increasing the priority of spare parts delivery. Parts more likely to be damaged – like canopies, flaps, doors, hinges, plugs and springs – are planned to be dispatched within 24hrs from the spares stores. Replaceable items normally needed during competitions will also be kept at our distributors and agents.