Two seat tail draggers can have up to 50 kg of weight on the tailwheel, presenting difficulties in fitting a saddle for towing purposes. Normally two or more people are required to retrieve such gliders after landing. 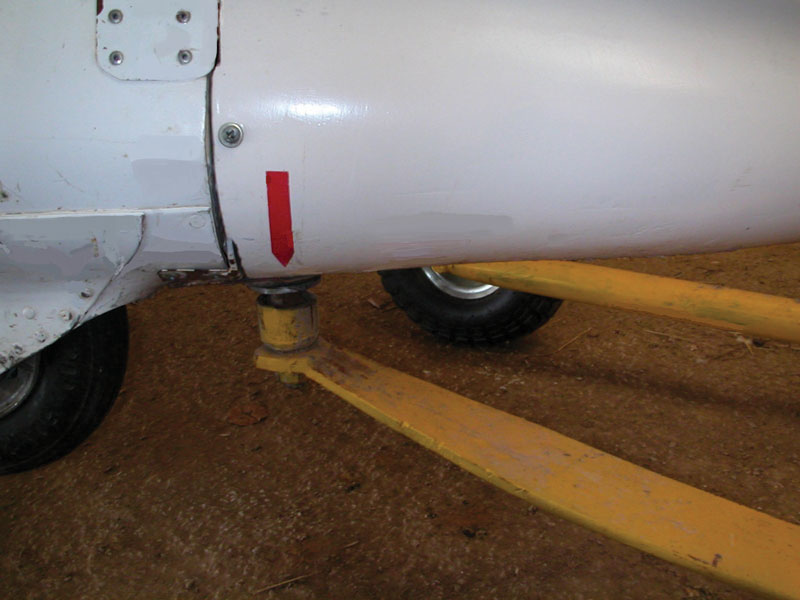 This can be tedious, slowing down operations. In addition, lifting the tail to fit a saddle poses health risks to operators. The saddle can be difficult to fit neatly and causes damage to the gel coat with time.

More than 20 years ago, a two wheel tow dolly was designed to tow IS28s. It had a leaf spring (Fig. 1) on which was located a spike which fitted into a vertical socket behind the tailwheel.

This system made the saddle unnecessary, but still required manual lifting of the heavy tail.

Back injuries were common.

The leaf spring made for a soft ride for the glider.
Around 2007, a system using a one-inch tow ball located permanently in the vertical socket of the glider, was introduced. The tow dolly was modified to have a cup or socket that engaged with the tow ball. The dolly was further modified to be articulated such that the dolly tow ball socket could be lowered to engage the tow ball and the dolly then used as a lever to lift the glider to the towing position. A latch in the dolly, fixed the dolly ready for towing.

This new system meant that manual lifting on the glider was obviated and gliders could be routinely retrieved by one person.
Turnaround time of glider retrievals was greatly reduced, improving operations, especially in training situations.
This system was used until the end of operations with IS28s.

The ease of use and marked efficiency of the system led to the consideration of a similar system for the ASK21s and Twin Astir.

Even though the weight on the tail of the ASK21 was only around 10Kg and therefore fairly easily lifted by hand, the disadvantages of the saddle and tow bar system were very evident. Over time the gel coatings of the gliders were getting severely damaged by the saddles and tow frames, which again, were difficult to fit and the coupling between the saddle via two pins and the towbar, resulted in frequent breakages. In addition, the home-made tow bars often broke or uncoupled from the saddle.

In short, over the years, this equipment required high maintenance.
Additional disadvantages were that the system was unwieldy, difficult to transport and had poor tolerance of variation in tow vehicle tow ball height resulting in one end or the other of the glider impacting the ground on an undulating surface.

On the other hand, the advantages of the tow ball system were well proven and a private glider, a Jantar 2B, had been fitted with a tow ball and used with a tailor-made snap together tow dolly, since 2009. This big wing glider has similar weight on the tail as the old IS28s. 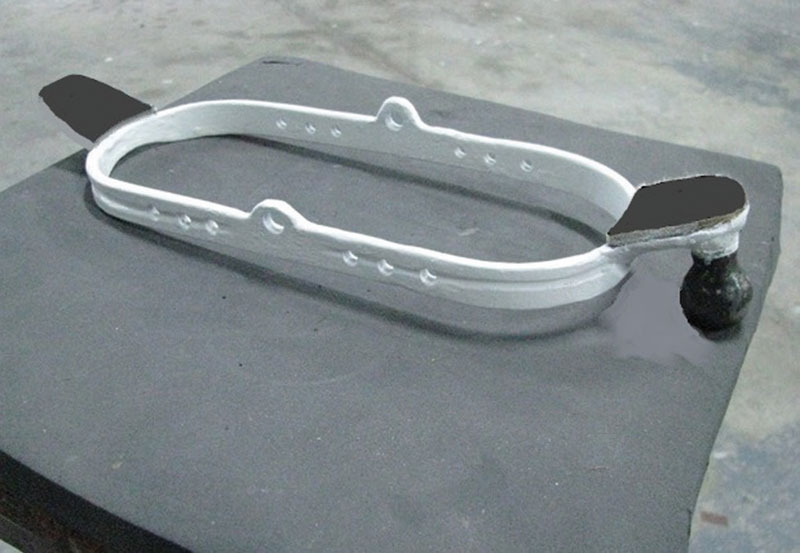 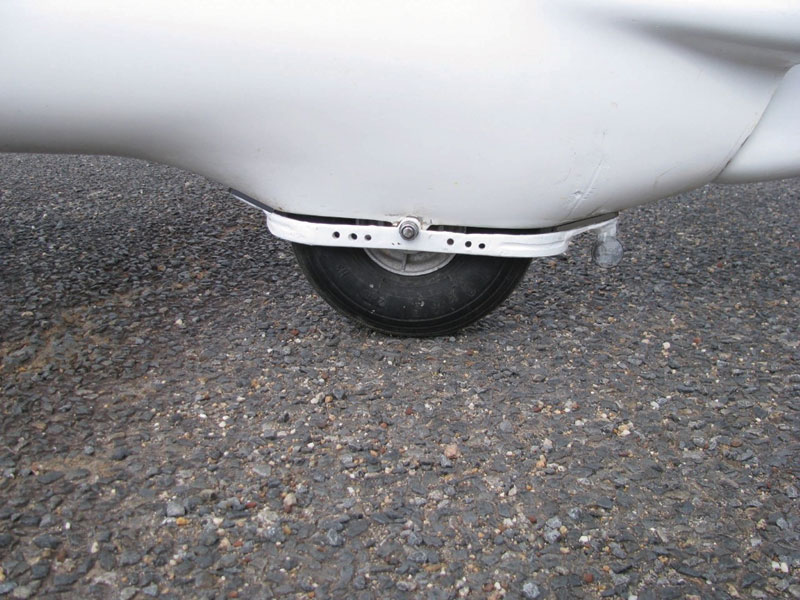 Two methods of fitting a small tow ball have been developed. The first uses an oval hoop that is attached to the glider via the tailwheel axle bolt. Apart from a longer bolt, no other modifications to the glider are necessary. The hoop, (Fig 2, 3) with tow ball weighs less than 600 gm and this system was used on the ASK21s.
With suitable Engineering Order approval and new weight and balance and spin tables, the system has been in routine use since 2017.

The shape of the hoop and the position of the tow ball behind the tailwheel, essentially mean the assembly cannot catch on ropes or wires.

However, the concomitant tow dolly development was not as straightforward. It was decided to incorporate an overload release and a shock absorber into the tow dolly. This would act to protect the glider in the event of it being towed into stationary objects as happens from time to time.

After several iterations, a final realization using a split tow ball cup at the vehicle-end, provided an elegant solution. A large tension spring can be adjusted to vary the release force. It is found that about 150kg provides a good level of protection whilst avoiding nuisance overload trips.

The tow dolly configuration used on the IS28s, had one large leaf spring to provide cushioning during travel. This spring had the spike at the end, coupled with a ball joint to the spring.

But with the spike replaced by a tow ball cup, this system was not satisfactory as the normal bouncing up and down of the tail of the glider, coupled with the short radius of the single leaf-spring, meant that the change in angle of the tow ball cup could exceed the swivelling range of the coupling. 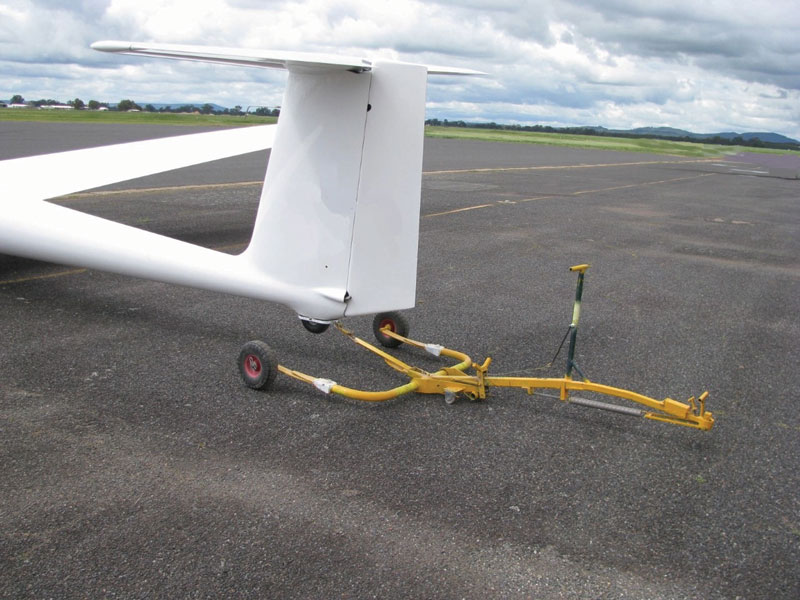 The solution developed (Fig 4), was to make the tow cup radius arm attachment rigid and put a short leaf spring on each of the tow dolly wheels. This made the radius of movement up and down, the length of the tow dolly, pivoting around the tow vehicle tow ball. The change in angle of the tow ball cup at the glider end, was thus almost eliminated and the tow dolly itself benefited from being sprung, smoothing its ride. 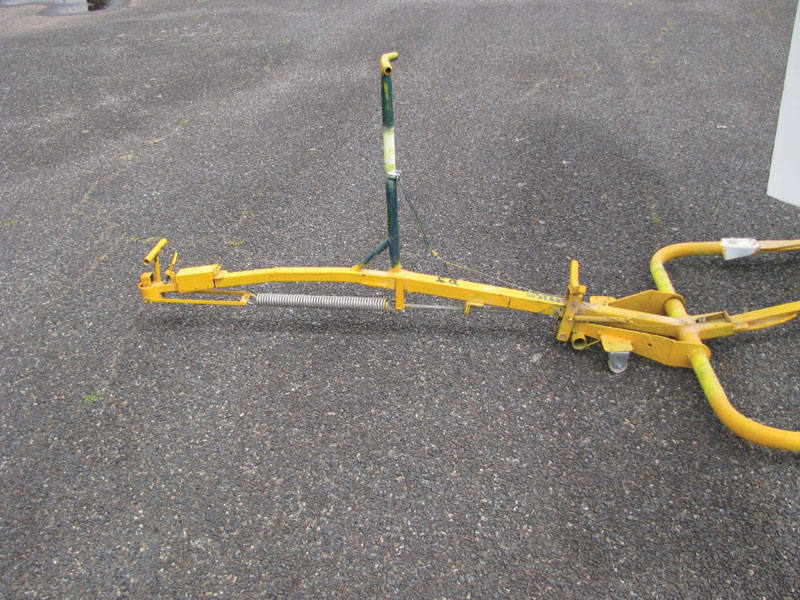 There is a chance of large G forces being transmitted to the glider tow ball when the tow dolly, with glider attached, is manually moved to the tow vehicle and dropped on the vehicle tow ball whilst still moving, resulting in severe end-to-end shock through the tow dolly.
To mitigate this, a neoprene filled shock absorber is built into the dolly (Fig 5).

The tow ball tow dolly system has been in heavy use for three years and has greatly eased operations and improved efficiency.
Maintenance requirements have been minimal and damage to the glider empennage has been practically eliminated.
In addition, the tow dolly system provides very easy manual movement of the glider on the field by one person.
This also applies to manoeuvring in hangers.

The two seat Twin Astir, also has nearly 50 Kg bearing down on the tail, making on-field retrieval difficult and hazardous to the operator. In the past, a small lifting bar was used to lift the tail for fitting of a saddle. Overall, the system had all the disadvantages previously mentioned and it was decided to fit a tow ball to the glider so that it could be used with the tow dollys used for the ASK21s.

This time, instead of a hoop attaching to the tailwheel axle bolt, a glassed-in tow ball was designed and fitted just behind the tailwheel. This is a very strong area and the presence of a bulkhead augments this strength. 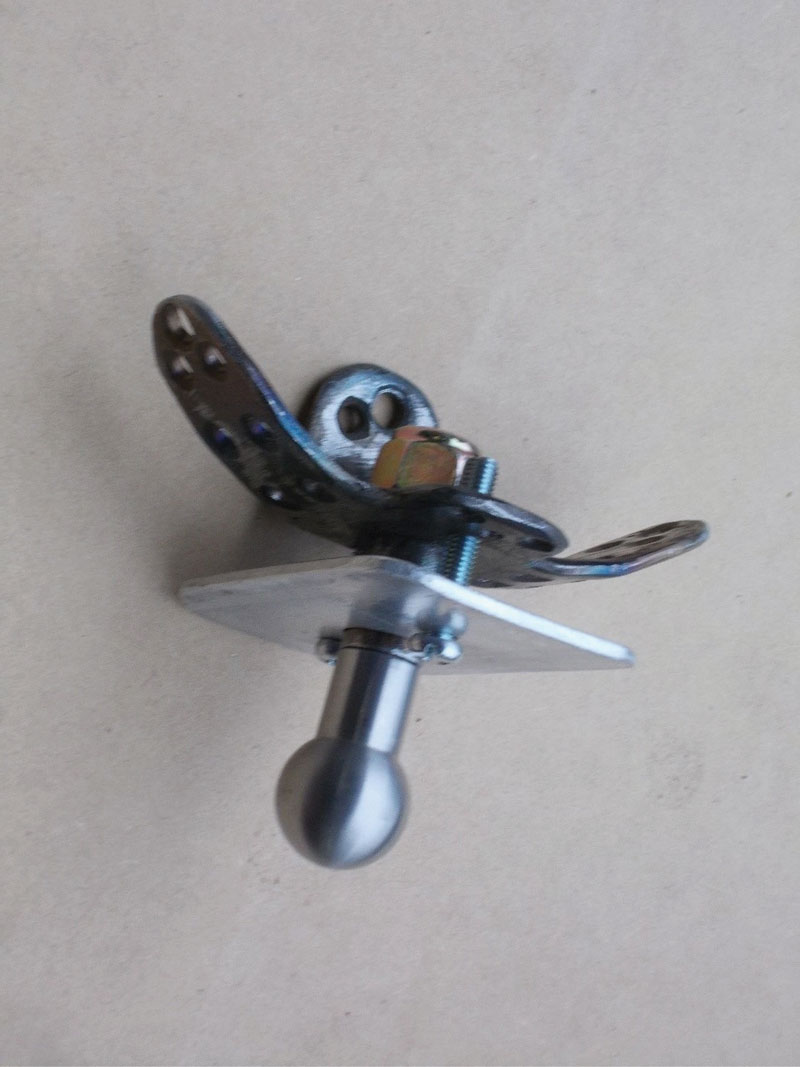 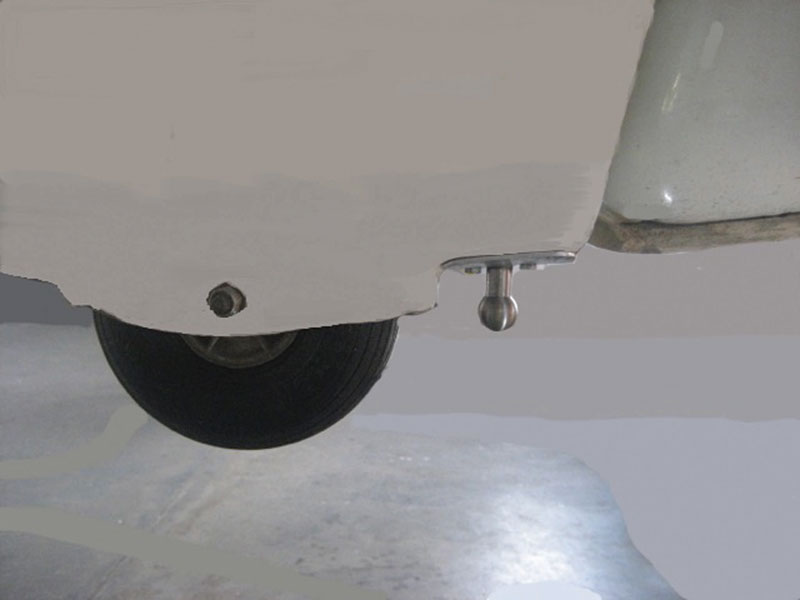 This fitting required some steel reinforcement (Fig 6, 7.) and compact design. The weight of the total assembly was around 0.5 kg. An Engineering Order was developed and the spin tables and weight and balance recalculated.

The tow dolly system does not allow backing of the tow vehicle and glider as does a fixed towbar and saddle.
However, the great ease of manual manoeuvring of the glider more than makes up for this.

The system means almost any vehicle with a tow ball can be used for retrieves, irrespective of height of the vehicle tow ball, provided it is above a minimum to keep the tow dolly clear of the ground. The two wheels of the tow dolly are aligned laterally with the glider tow ball cup meaning higher tow vehicles only result in a small change in angle of the cup but the height of the glider during towing stays the same.

In the case of the Jantar 2B, a glassed-in design is used, but no hole for the tow ball had to be cut into the glider as suitable holes were already there.
The associated tow dolly is of a simpler design and has no overload or shock absorber function, since the glider is privately owned. The dolly pulls apart without any screws or pins and can easily be carried in a car boot. This was deemed essential as the glider was used for overland safaris.
The system has been in use for more than a decade. 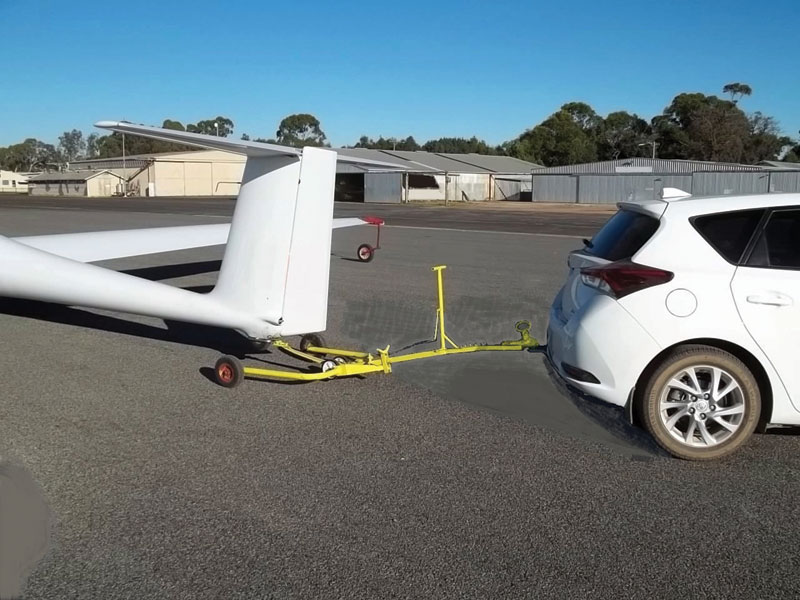 Summary
The glider tow ball system provides a simple and elegant means of towing gliders without the risk of damage to the glider presented by saddles and towbars. It greatly improves on-field operation and efficiency, particularly important for training operations. No heavy lifting is required, this being important for Operational Health and Safety concerns. Manual ground manoeuvring by one person, even of heavy gliders, is routine with the system. The overload release system minimises potential damage caused by towing gliders into objects.

The optional fitting of a tow ball in new gliders, would be a relatively simple matter if done during manufacture.