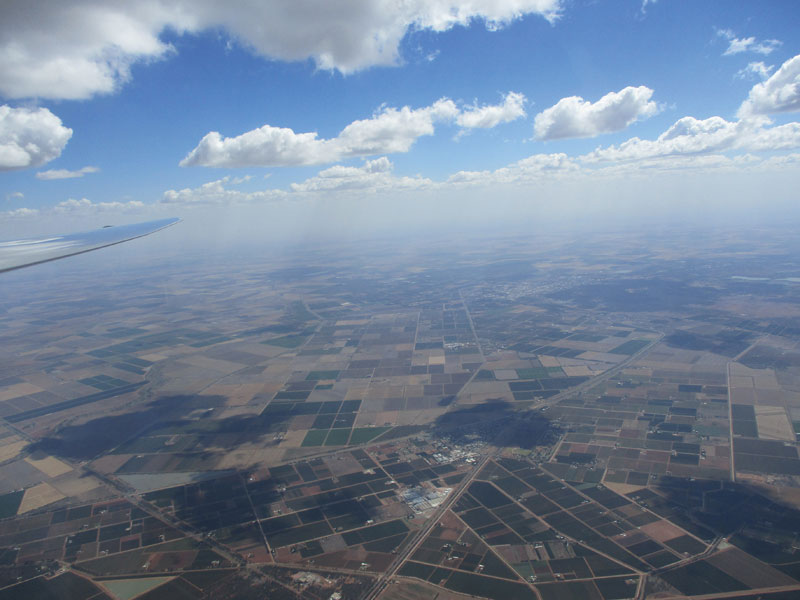 At the beginning of January, Bathurst Soaring Club pilots packed up their gliders and drove the three hours south to the annual Temora camp. Many members of Canberra Gliding Club also made the journey, hoping to be in the right spot for the peak of the summer soaring season.

After the smoke and dust of the previous year, it was a relief to return to more normal weather conditions. It seemed that more pilots than ever flocked to Temora, where over 30 gliders lined up for a launch each day.

This year the weather conditions were good with several strong soaring days. But neither did we experience the extreme conditions of two years ago, nor the more or less unflyable conditions of January 2020. 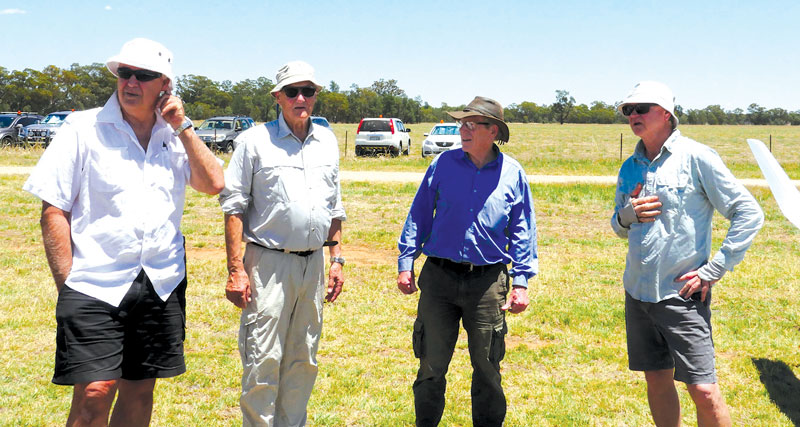 On 7 January Ed Marel had the longest flight out of Temora, flying 657km in his ASH 31. But it was a few days later on 10 January that the big soaring days arrived.

Temora CFI Grant Johnson achieved a terrific 775 km in his Nimbus 2. He flew a 600km FAI triangle via Hilston then Jerilderie and added a further 175km at the end. However, son Nathan flew 763km in a Std Cirrus, without water!

On 11 January, Matthew Scutter and Mak Ichikawa arrived at Temora as the weather in the middle of the week looked very promising for long distance flights. Both Matthew and Ian de Ferranti flew over 600km that day. The next two days were big pre-trough days with many long flights flown from Temora.
Thermal heights rarely reached 10,000ft and most days had at lease some cumulus. It was in a way refreshing to have a period of good soaring conditions free of the drama of the last few years.

The Bathurst Club brough a tug to Temora with Brian Bailey to fly it each day. Many thanks to everyone for a succesful two weeks in the northeast of the Riverina region of New South Wales. 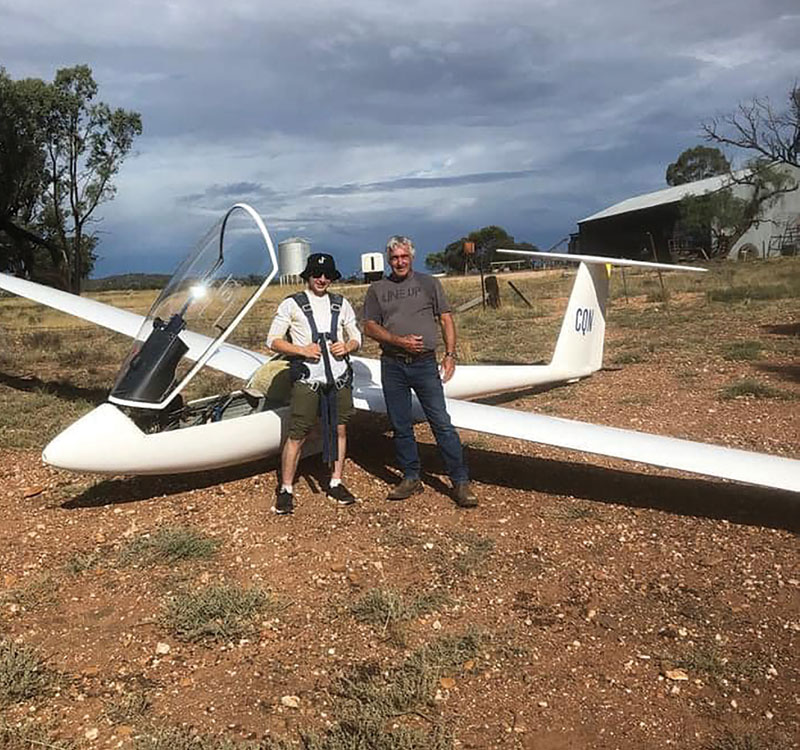 Alex King after his first outlanding. The next day Alex skipped his first 300km and flew a memorable 453km. But he still needs to fly his official Gold Distance.

Alex King from Bathurst Soaring Club flew the club LS4 to Temora for his first cross country camp. At Temora he completed his Silver C and set his sights on his 300km Gold Distance. Though he unfortunately failed to complete the Gold Distance declaration, in fact, he had no difficulty with the flying - on 13 January he flew 453km! He also had his first land out, which he handled very well. Well done, Alex

Mac and Akemi Ichikawa ready to launch at Temora.

You can spend days looking at the weather pattern and see how the actual weather develops. You may think, ah, ‘Wednesday looks like the big day’. But when Matthew Scutter and Mak Ichikawa suddenly show up at the airfield, then you know the big day is on.

Matthew had been flying from Narromine in his new Diana 2 with Mak in his JS3-18. They were there to practise together in preparation for the World Gliding Championships to be held at Narromine in 2023.

They thought that a trough system approaching NSW would bring stronger conditions to Temora so they changed location. Mak said, ‘The weather was pre-frontal with a good cloud base and no high winds.’

‘But the day overdeveloped, was a bit too moist and showers developed. We turned short of Ivanhoe so I could get back, as I don’t have an engine.’
Mak flew 910 km at 135 kph and Matt 997km at 131 kph.

The next day they tried for a 1250km yo-yo flight. Mak said, ‘We took a high tow, but the CU’s started about half an hour late. In the south the climbs were not as strong as we had hoped. Also, cirrus started to come in. So we abandoned the task.’

Matthew decided to fly back to Narromine rather than land at Temora. Mak flew 988km OLC. He actaully achieved 1,015km but the OLC scores for a maximum of five turns, and Mac had six. so the final kilometres were not counted. Matt’s flight ended up at 982km.

You can see a video interview with Mak online at GA Magazine https://bit.ly/3dR4Vkm

Matthew Scutter landing his Diana 2 FES at Temora after a flight of 997km. 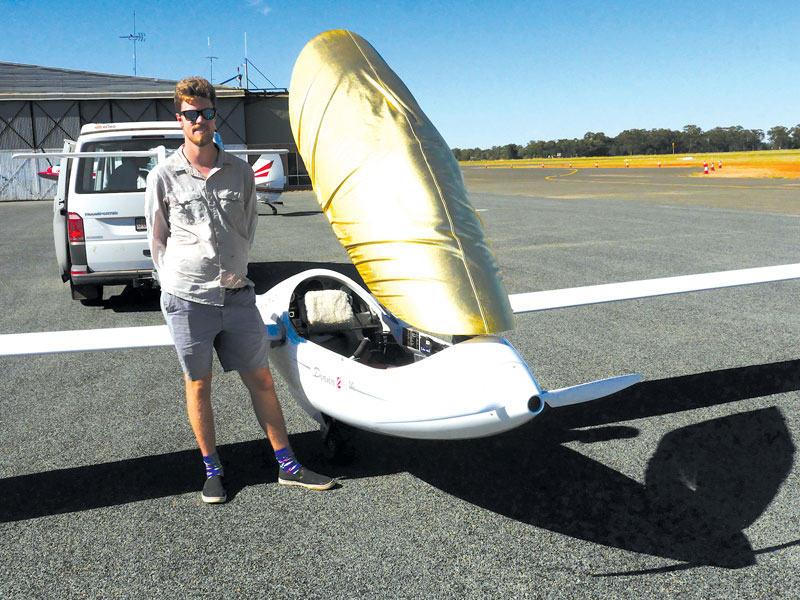 Matthew has been enjoying his new Diana 2 (SZD-56-2 Diana 2 NG – FES). At the time of writing, it is one of two so far delivered to Australia. It is the only one with a FES. Matthew has been flying from his new home club Kingaroy, as well as Narromine and Temora. He has also just taken part in the Lake Keepit Regatta. 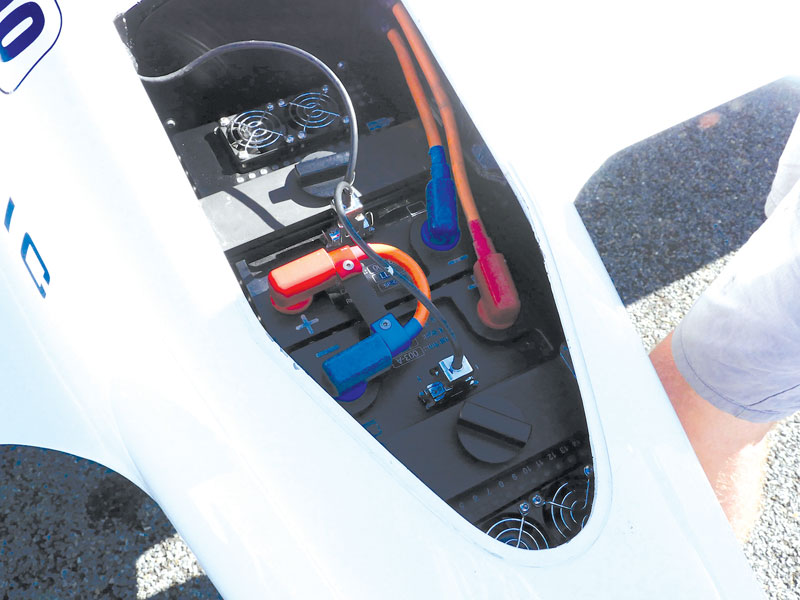 The battery compartment of Matt's Diana 2. The glider is fitted with the new generation XL batteries that supply 30% more power for the 24 kW engine. It is a self launcher - even fully ballasted to 53kg/sqm.

Keith Gately and Dean Ward flew 701km on 12 January. They were going for 750km but rain developed along the track. However, this was Dean's longest flight.  As you can see in the photograph to the right, they enjoyed their flight on 'Big Tuesday'.  Keith has been having a terrific season flying record flights with Adam Woolley and doing well in the Two-Seat Championships. 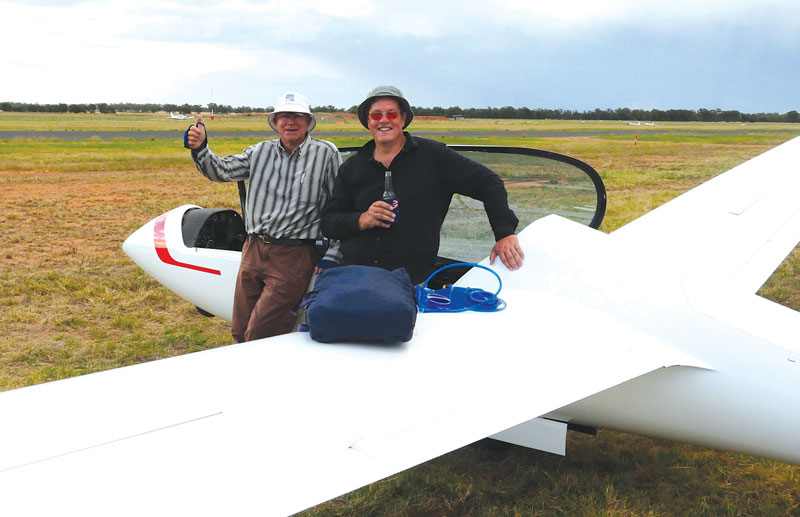