I would like to paint you a picture of gliders launching and climbing away at a competition, cumulus clouds all over the horizon. These are not the 18m Superships that have become a common sight at State and National Comps. I am circling in a gaggle, comprised mostly of Libelles with the odd standard Cirrus, Hornet or Jantar thrown in the mix. A voice comes over the radio, "Leeton gliders, the start gate opens in 10 minutes not above 4,500ft." You could be forgiven for thinking that I am decribing a scene from the 1970s but this is 2021, the final day of the Formula 1.0 GP. 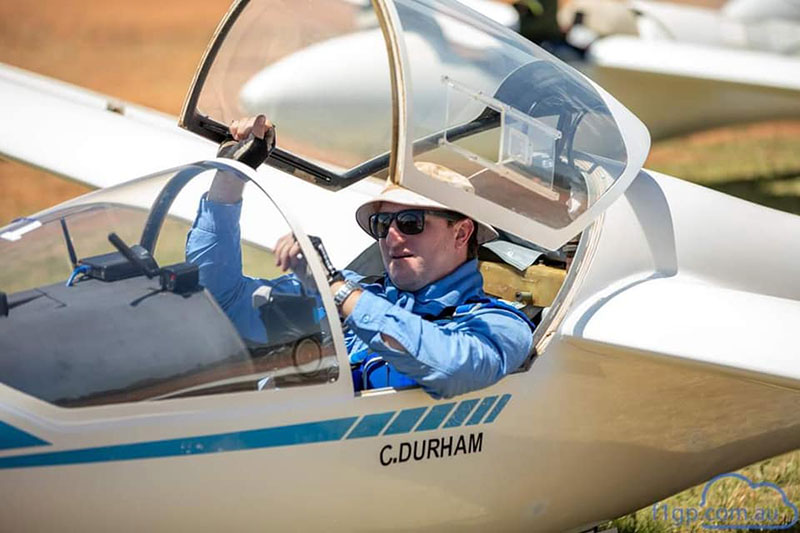 Charles Durham on the grid making preparations for the day's task with the help of his friend Naomi (bottom picture) , acting as crew.

As I approached the start line on that day at Leeton, a voice came on the radio counting down the seconds until the gate opens. I must be below 4,500ft, I must not exceed 90kts ground speed and I must not cross the line before the gate opens. Ahead of me and to the right is a Hornet flown by Jenny Thompson, and on my left is her daughter Sarah in a Jantar with very distinctive purple metalic wing tips. In the distance is a glider that can only be Adam I'Anson with his highly visable fluro orange strips on the nose of his Cirrus. 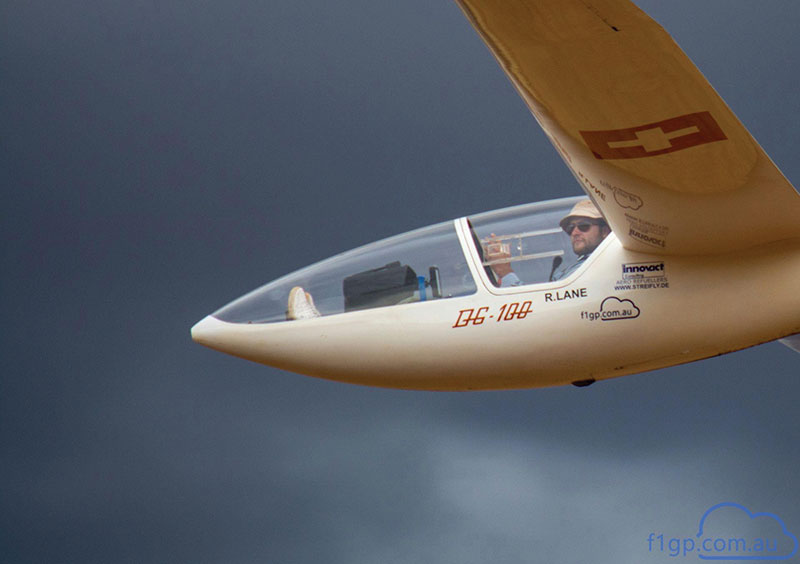 Ruben Lane crossing the finish line in his DG100

Hot on Their Heels

A quite reasonable assumption is made by all of these pilots that hot a swarm of Libelles is hot on their heels, literally ready to pounce on us all at the first thermal. As the start line approaches, we all start to pile on the speed to get rid of those extra few hundred feet before we cross the line as the GPS counts down to zero. Then, as if somone flicked a switch, the GPS reaches zero, beeps and all the tension evaporates as the gliders slow down, turn slightly and start tracking for Aria Park. The race is on. 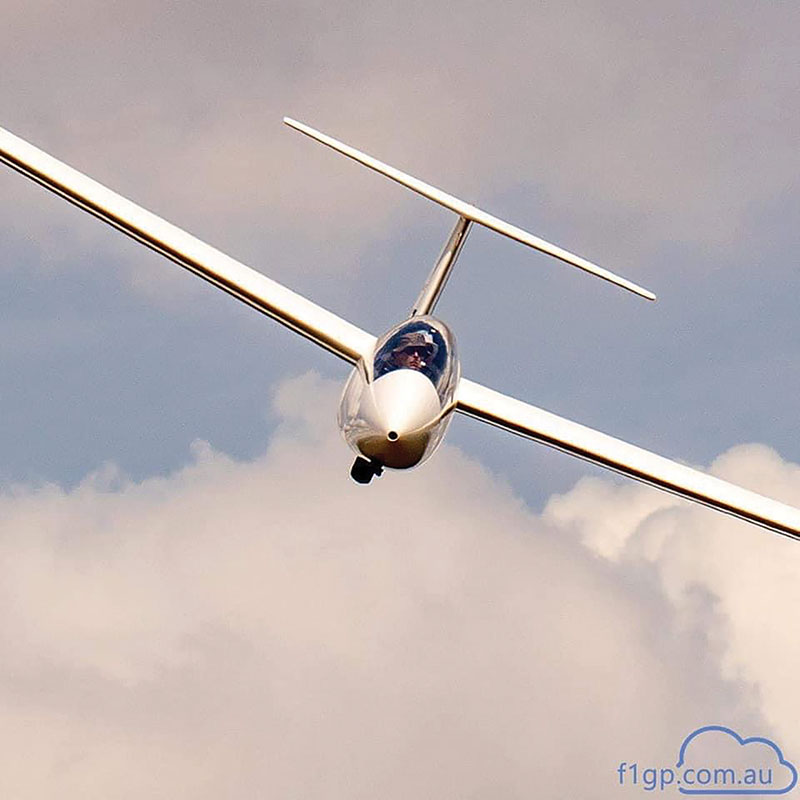 Tom Gilbert finishing after the fleet in the Janus. Thanks to Tom’s input, the task setting was excellent!

I first gained interest in this competition about three years ago. The idea of a serious competition aimed directly at Club Class was very enticing. I myself fly a club class glider and although I was not able to make the first year, I greatly enjoyed following the competition online. I am consistently impressed with the innovations coming out this competition. Every glider carries a tracker, which allows anyone to watch the task unfold live on a mobile phone. This, combined with the format of shorter racing tasks and the old style start gate, slightly modified for safety reasons, makes for very exciting racing and is very engaging for the spectator. 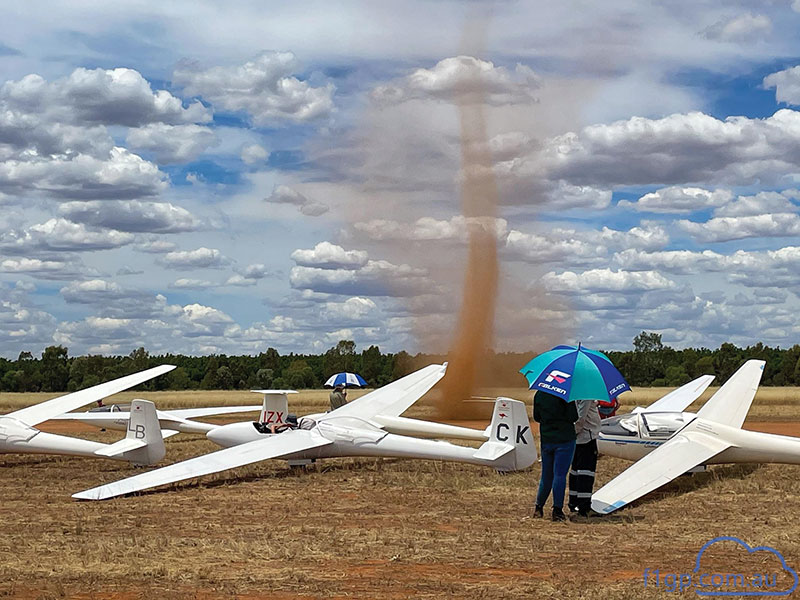 Gliders on the grid preparing to launch into excellent conditions, as is evident by the dust devil in the background.

We had arrived at Leeton eight days earlier, rigged the gliders and set up our campsite. A beautiful, lush, green patch of freshly mown lawn awaits us -- Leeton Airfield! The Leeton Aviators Club, who currently have stewardship of Leeton Airfieid, have put a lot of effort into preparing the airfield for us.

In fact, the local club has put a great deal of work into the facilities and I hope that, as a result, more glider pilots will take advantage of this place, which is perfect for events like this. The club house has been recently renovated and the camping area surrounding it is not only excellent but its close proximity to the club house creates a real sense of community and only helps to enhance the social atmosphere. There is something quite nice and relaxing about the fact that all of us are living in the same spot, sharing meals together and spending the evenings telling tall stories of the day's flying. We can all share a laugh and drink and without having to drive into town to our accomodation at the end of the night.

Leeton also introduces a family atmosphere to gliding competitions, since many of the competitors bringing their families or partners with them. It's a good opportunity for a lot of city kids to come out to the country, ride their bikes around the airfeild, have a break from technology and get some fresh air. 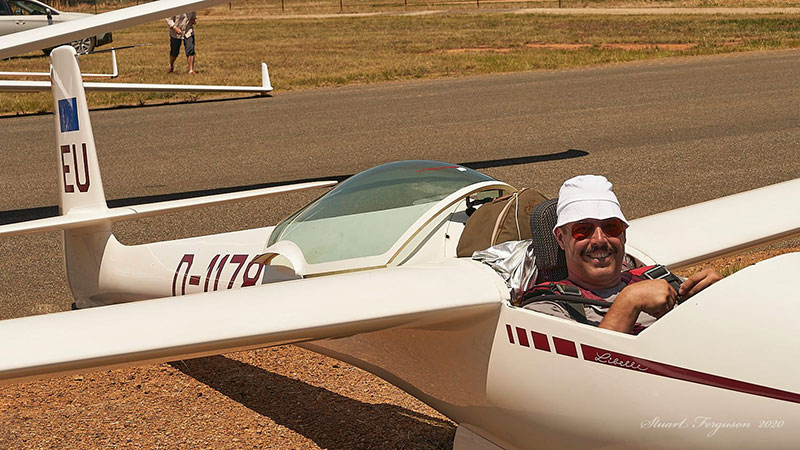 Christian Streifeneder prepares to launch in the famous 'Super Libelle'. Charles Durham on the grid making preparations for the day's task with the help of his friend Naomi, acting as crew. 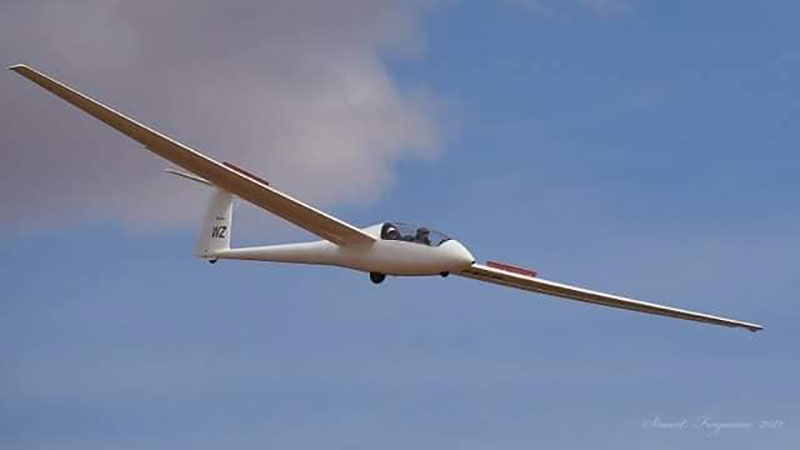 One of the things I like about the tasks we fly in this competition is that they are short and fast -- no 500km tasks here. Our task today is a little over 150km. This means that you can always see other gliders around you and get a rough idea of your placing. Having another glider ahead of you gives you the goal of catching them.

The handicap system is also one of the best I have seen. A glider’s handicap affects the task you fly. A lower performace glider like a Libelle turns 1.5km short of the turn point, whereas a Hornet or a Jantar turns at the turn point. An open Cirrus, on the other hand, might have to fly 1km past the turn point. Put simply, the higher performance gliders fly a slightly longer task to keep it fair. Somtimes as I approach a turn point in my Hornet, it can be a little disheartening to see a Libelle ahead of you cut the corner, but then it simply heads on to the text turn point and marks the next thermal for you, so it all evens out over the day. This really is a true air race, short, fast and competitive, not to mention fun.

Several times throughout the day, I would be in a gaggle and see all the other gliders go off ahead of me, leaving me to believe I was coming last, only to find those same gliders entering the next thermal after me. The atmosphere had been quite unstable all week and I was amazed to find aircraft flying so close together experiencing such different conditions. We rounded the last turn point and started tracking for Lumpy’s Loop, a turn point placed 10kms out from the airfeild in order to make sure all gliders approach Leeton from the same direction each time. 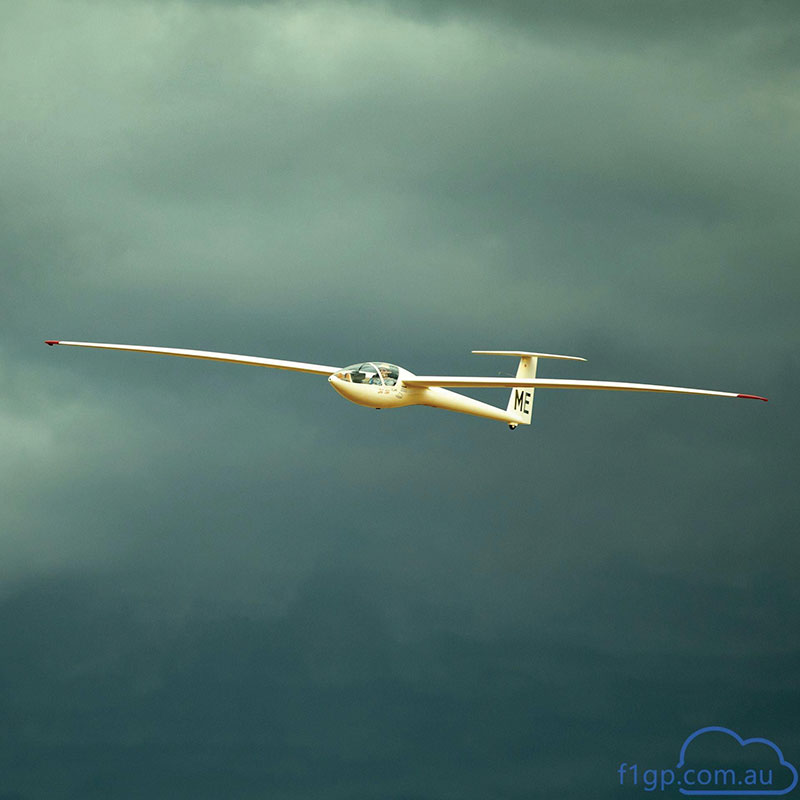 Edge of Your Seat

We would approach Leeton from the east with the choice of a straight-in landing or a competition finish in front of the club house where Tom Gilbert, our official photographer, would be waiting with his camera. There is something special about seeing gliders crossing the line at high speed in quick succession. It's edge-of-your seat stuff!

Every one calls inbound as they turn Lumpy's Loop, giving you a good idea of where you are positioned in the race to the finish line. Christian Streifeneder claimed line honours for the day with his famous Super Libelle. I myself came 6th having a photo finish with Adam I'Anson who manged to beat me by a fusilage length -- a very near photo finish.

The final tally saw Scott Lenon from Temora the overall winner of the Ingo Renner Trophy. It was great to see the competition continue on through all the adversity surrounding Covid-19. With the hard work and determination of the volunteers and the perseverance of competitors, we could continue to fly when so many other competitions this season have been cancelled.

The F1.0GP is a credit to those people who give their time to run it. A couple of people who deserve a pat on the back are the competition director Greg Schmidt and safety officer Aaron Stroop. These guys and many others have worked together to give us a competition that is a little diferent to others and may just give the gliding movment the public interest and the kick start we need to build up our sport and secure our future. 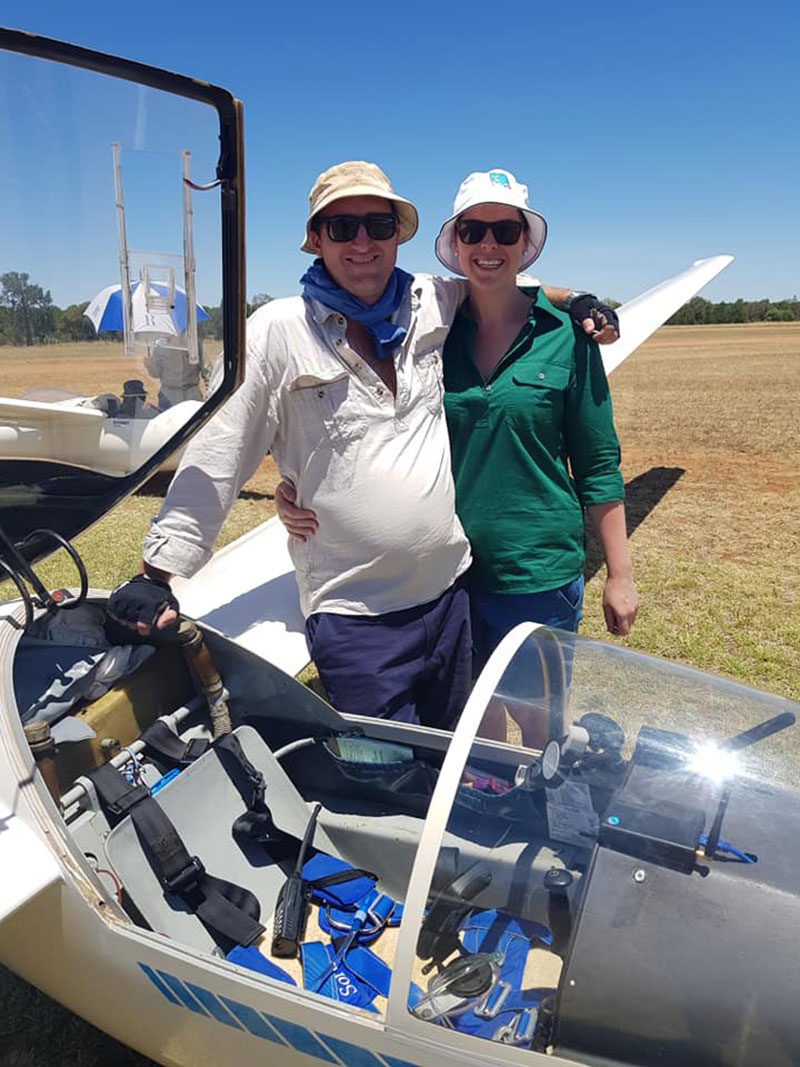