Although the 18m Class was below the class minimum number and the pilots were unable to vie for the state trophy, the gliders couldn't be combined into a single class due to the large performance discrepancy, and the four 18m gliders flew separately. The fleet used water ballast handicaps for 18m, while Club Class flew dry.

The strong SE winds prevailing after the hot coaching week made task setting challenging for Craig and Haidyn. Six competition days were flown mixed with speed tasks and AATs The last two days brought much improved weather and faster speeds. A safe friendly competition was completed without accident and only two out landings. Each evening became a sociable occasion when all could discuss the day’s challenges and enjoy meals prepared by generous helpers together with beer and wine. Soaring Spot, managed by Adam Howell, recorded the daily progress.

I would like to thank all pilots and those that crossed the border to make the competition a success, the tuggies without whom no competition would be hed, the organizers and the launching helpers, the catering volunteers with their generous help, the task setters and online scorer Adam Howell and retrieve crew Brink who generously assisted recovery of a sandy out landing with his 4WD.
by Brian Rau, Competition Director 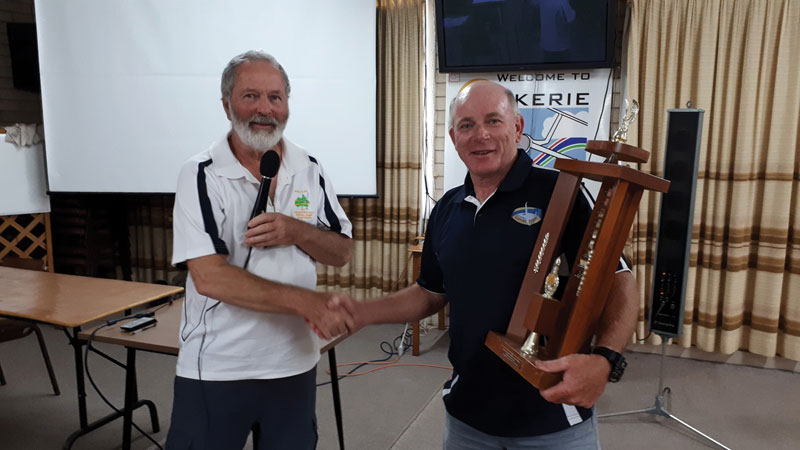 This year’s South Australian Gliding Association Coaching Week at Waikerie in South Australia’s Riverland was a great success with 25 coaches and students, six twin-seat and six single-seat gliders and good soarable weather. Morning lectures followed by afternoon flying and flight analysis after dinner created a positive learning environment for any aspiring cross-country pilot.
It was great to see that several pilots were given their first opportunity to fly cross country, some in a twin with a coach and others with a lead and follow flight. Cath Conway’s Dimona was also used to provide outlanding instruction. A number of pilots achieved badge flights, some for their first 50km out and return. The State Championships followed the Coaching Week, which gave some pilots an opportunity to extend their cross-country skills.
There were lots of smiling pilots by the end of the week, so thanks must go to the Waikerie Gliding Club for making their facilities and accommodation available, and to those club members who put on some great evening meals.
Coaching Week will be held again at the end of this year from Sunday 26 December to Saturday 1 January 2022. I look forward to seeing you then.
By Craig Vinall, SAGA Soaring
Development Manager 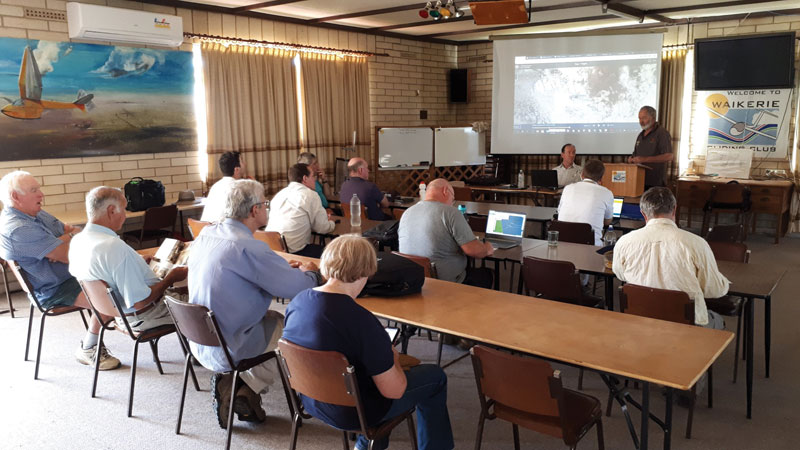 Would any of you who are new to gliding like to feel confident in flying cross country? Of course you would. I am no different. I have been gliding on and off for 40 years, and returned to the sport recently. I have never flown any real distance from my home airfield without the instructor, for fear of landing out.

South Australia’s Riverland. The Riverland covers an area of some 9,386 square kilometres along the Murray River from the New South Wales and Victoria boarders to Blanchetown in the west. The Waikerie Gliding Club was the perfect venue to practice cross country soaring and developing the courage to leave the safety of the local area and venture afar, out of one’s comfort zone.

There was a good cross section of aircraft at the Coaching Week, including ASK21s, Duo Discus, DG1000s for dual instruction as well as a number of single seater aircraft for those who have flown cross country and wanted to hone their skills. There was also an ASW30Mi. Clubs represented this year were from the Adelaide Soaring Club, Adelaide University Gliding Club, Bordertown & Keith Gliding Club, Balaklava Gliding Club and Waikerie Gliding Club.

The first official day was quite windy and no flying took place, allowing us to put all the aircraft together and everyone to meet each other. There were lectures and discussions both in the morning and afternoon in preparation for better flying weather for the rest of the week.

At 9am each morning, a group briefing was held of the day’s weather forecast, together with any warnings. The weather was presented each day by a different person to give a different perspective. We were then told the course to be flown, way point and turn points and details relating to the flight track. The morning finished with a lecture on various topics together with group discussions afterwards. Flying commenced in the afternoon at around 1 pm.

At the end of the day’s flying, all the flight data was collated and performances put up on a white board for review and discussion together with the flight logs on the computer screen. Comparisons were made between all our flights for the day.

Distances flown over the week were in the order of 100km, 200km, 300km and 400km. Not all were proper triangles, however, all flights were challenging. My longest flight lasted over 4 hours. Although we did most of our flying on blue days, the last day saw us flying in cumulus conditions in cloud streets, which made a welcome change.

Since Thursday night was 31 December, a quiz was organised in the evening followed by some fun entertainment including some jokes from the floor.

I would like to thank all those at the Waikerie Gliding Club who made this week possible and to the people who presented lectures. A lot of organising goes into making an event like this successful – from the organisers, tug pilots and kitchen staff. I would also like to thank the SAGA representatives who made the event possible. It was a successful week.

I encourage all SAGA members to join the Coaching Week next season. You won’t be disappointed. You will not only have fun but meet fellow pilots, learn a lot and have the confidence to fly further than you have ever done before. That’s got to be a positive for anyone’s flying.
Tim Burn Balaklava Gliding Club 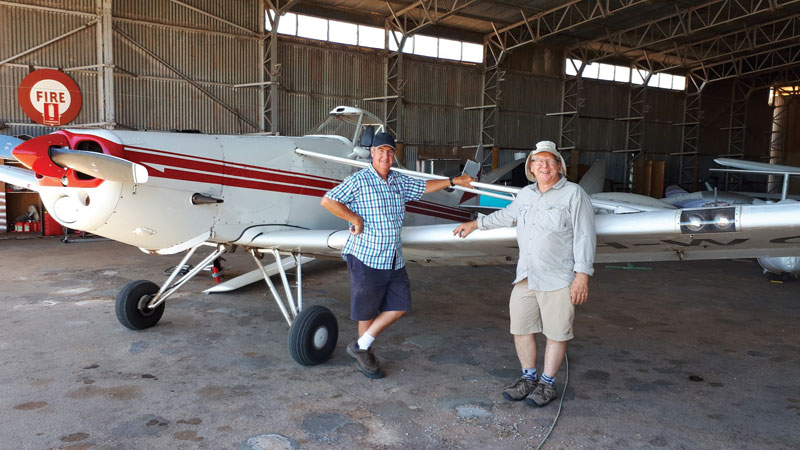 What a week! After I attended the coaching week – an event that’s a 'must do' for all pilots proposing to fly cross country, the next great step in soaring – I found my self sticking around to see how the serious guys do it.

Not only was the experience fascinating, but it also gave me the opportunity to meet the competitors on a social level around the awesome facilities that Waikerie has to offer. It’s just like a gliding resort, if there is such a thing, with air-conditioned accommodation that steps out onto irrigated mowed green lawn.

In the evening I would sit under the pergola that stretches the full length of the club house looking east onto the tiedown area, with the setting sun behind. In the cool shade, the pastel colours drew a beautiful picture of all the sailplanes lined up on two cables across that green lawn, with a vintage red courtesy of Craig Vinall. Simply perfect.

The members' kitchen was typically a hub of activity in the mornings and evenings. Some would make a full cooked breakfast prior to preparing their gliders for the day's racing task, although I opted for the traditional coffee. Everyone was allotted a section within one of the three large refrigerators, and a dedicated pigeon hole for dry goods.

Keith from Bordertown, who clocked up his 583rd 5hr flight that week, would always be there, super organised and focused. What a gentleman, and what a story he has to tell. I hope he writes an autobiography preserving the gliding adventures he was so privileged to have experienced, taking him through America, Europe, England, Australia and Soviet Russia. I believe he has attended over 23 world comps everywhere around the globe over the past 50 years or so.

Briefing at 10am everyday gave everyone that extra bit of time to prepare, covering both the A task and the B task in the event that conditions changed. Brian would cover the meteorological variables that then determined what Craig prepared for the racing day. An urn for coffee and tea was always ready to go and freely available for all. Baskets of fresh fruit were available on the bar, together with the dinner list used to determine the numbers to cater for that evening.

The launches were very well coordinated with Bill Mudge at the helm. His experience in managing multiple gliding events together with the tug pilots in the two powerful Pawnees, wing runners, cable catchers, timekeepers and crew made an efficient start to each day.
I took photos of everything, which have been uploaded to the Waikerie Gliding Club’s new website to be published sometime in March, so look out for that one. 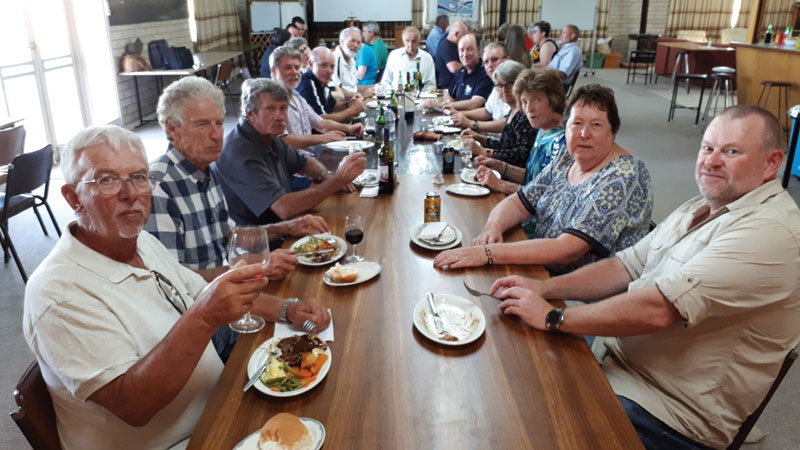 Every night the main kitchen provided dinner for around 25 people, including dessert. Nigel and Heather Baker prepared their traditional ‘pigs in blankets’, a sausage mignon served with a creamy gravy laden with mushrooms, yum, and provided the best hand made salads and desserts to accompany every main course, changing them everyday throughout the Comp.

Craig prepared his traditional Paella, baby-sitting the rice until perfectly caramelised while he would sip a glass of earthy, meaty Châteauneuf-du-Pape alongside. While I opted for the traditional BBQ Lamb and Halloumi Skewers, Pork Mignon, local lean beef snags and field mushrooms, Shirley prepared an awesome lasagna among many more meals, finishing up with the presentation dinner with more than 30 in attendance.

After attending both events back to back, I had clocked up 41.3 hours over the two weeks and was able to meet the likes of David Pietsch, who started his Jet engine on his JS 1 Revelation one morning, prompting me to scramble for the keys to the golf buggy and shoot over to his hangar and check it out.

I managed to chat with Peter Temple on several occasions. Simply put, Peter inspired me. His natural aptitude for soaring both in competitions and cross country is impressive, and congratulations to Peter for winning 1st place in the comp.
The camaraderie was amazing, and I look forward to catching up once again.
By Rodney van den Brink