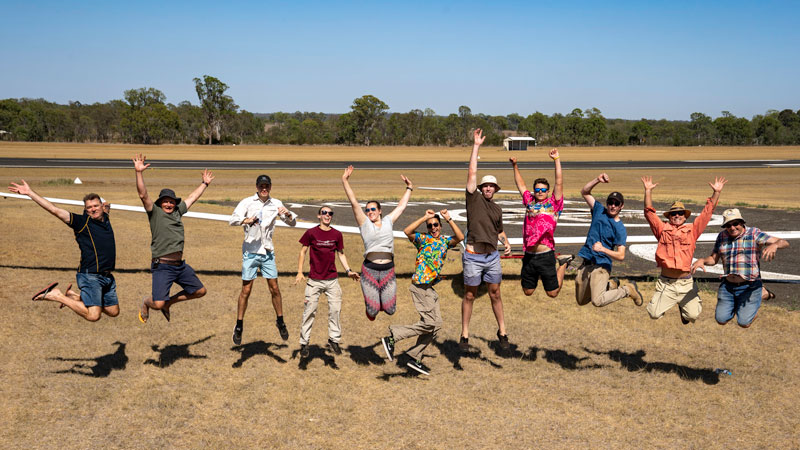 “There’s always something quite special about going to a JoeyGlide – whether it’s the electric
atmosphere at briefing, the great mateship between everyone or the generally relaxed air of the
competition.” Michael Keller

After several years of less than ideal weather, we thought of doing what most gliding competition organisers want to do – go north. Combined with the fact that JoeyGlide had not been to Queensland for nearly ten years, there was no better time to get in touch with Kingaroy Soaring Club. Shortly after our proposal we got the response, “Fill your boots!” The Juniors were heading to Kingaroy! 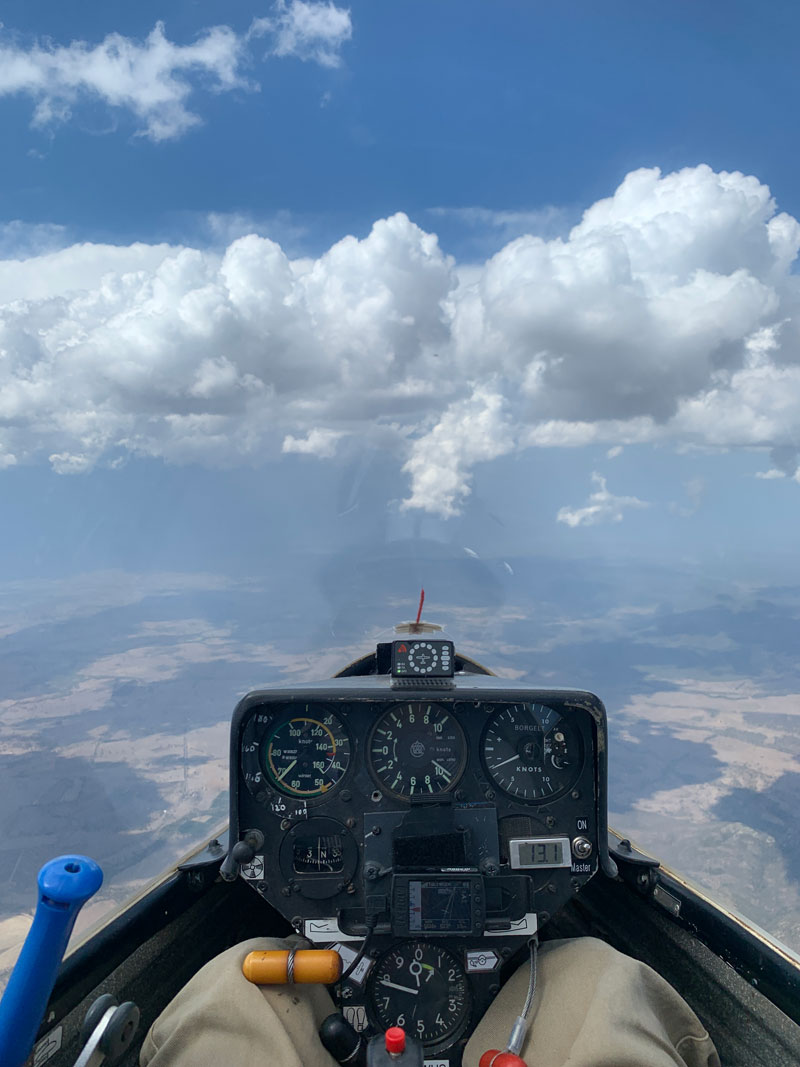 Ryan Driscoll heads for Biggenden on the last day.

In recent years, the method for running JoeyGlide has been the AJGC boxing up the package, then seeking the highly capable help of some generous locals to send it for us. Basically, the juniors turn the handle on the JoeyGlide machine and get all the logistics, aircraft, personnel and catering in place, and then some very proficient helpers run the organisational side of the competition while we go flying. This year we knew we were in exceptionally good hands when Greg Schmidt agreed to direct the competition, with Peter O’Donnell, Al Sim and many other key contributors. The scene was set for a classic 16th Australian Junior Nationals and Coaching Program.

The night before the official practice day saw a buzz in the tie-down area as juniors from right around the country rigged their gliders in anticipation of the week’s flying. For many who are new to the JoeyGlide circuit, this is an opportunity to meet a group of like-minded junior pilots just like themselves. For those returning, it is when mateships come to the fore after months of absence. This rigging session was made all the more exciting by the looming SkySight forecast, which was showing several days of booming weather for the start of the competition and coaching program.

Official practice day arrived, and the pilots, coaching participants, family and friends assembled in the Kingaroy Soaring Clubhouse for the customary ‘Welcome to JoeyGlide’ and general morning briefing. Each day followed the same routine. Greg Schmidt delivered the day’s task accompanied by a weather briefing delivered remotely by Jenny Thompson. As has been the case at JoeyGlide from the beginning, the obligatory fines were also collected for any amusing misdemeanours from the previous day with the proceeds going towards the RFDS.

Shortly afterwards, Peter O’Donnell would collect his team of coaching participants and coaches for a short briefing, followed by a trip over to the hangars to prepare the coaching two-seaters for the day’s operations. 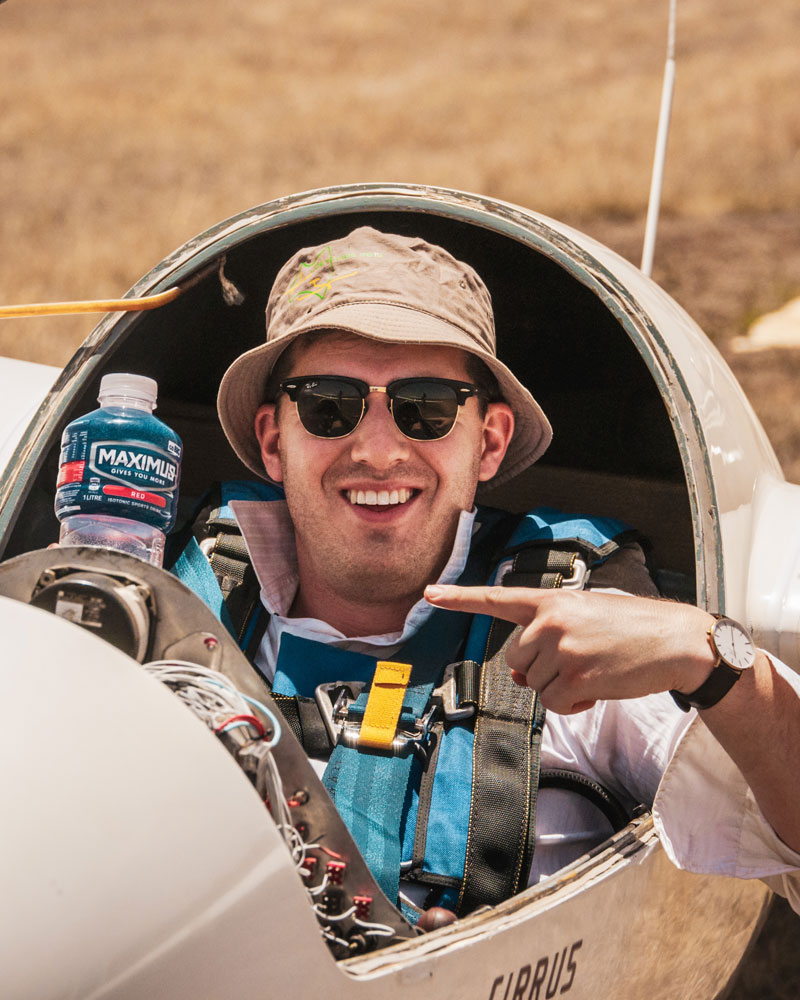 Ben Spoor ready to launch in his Cirrus.

The coaching participants were spoilt once again this year with three Duo Discus and one DG1000 made available to the AJGC for use in the Coaching Program. A special word of thanks goes out to the Griffin family from Darling Downs Soaring Club who generously made their Duo Discus T available to the AJGC at no cost. Such generosity is passed directly on to the coaching participants, resulting in a stunningly small flying bill at the end of the program.

The standard of coaching and instruction was as high as it has ever been, with the likes of Steve O’Donnell, Greg Kolb, Mark Dalton, Nathan Johnson and Arnold Geerlings delivering introductory cross-country coaching to the twelve participants. Mentors Lisa Turner and Joe O’Donnell were also on hand to provide guidance all week, helping with everything from thermal centring technique to digging out camelback tubes from behind seat backs. 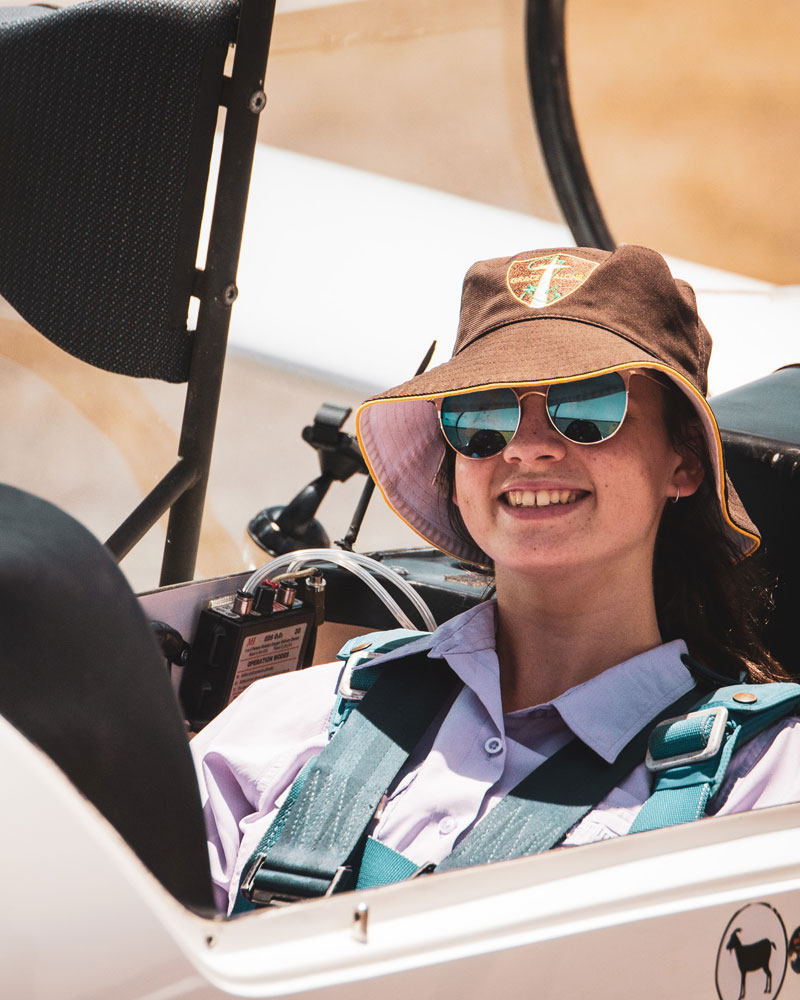 The stunning Queensland weather ensued, with a minor hiccup on Day 1 when a gentle storm washed half the fleet out of the air and into paddocks. From Day 2 onwards, the temperatures, cloudbases and climb rates steadily climbed, and the fleet of competition and coaching gliders enjoyed some quality racing.

Southeast Queensland was in the grips of a crippling drought, which meant that the small amounts of moisture in the air were insufficient to form storms in the record-breaking temperatures. Instead, we got 14,000ft inversions over Kingaroy, in the blue! The best news of all came weeks later, when photos of a lush green Kingaroy valley appeared in the JoeyGlide WhatsApp – unrecognisable from the scorched terrain we had enjoyed a week of racing over. 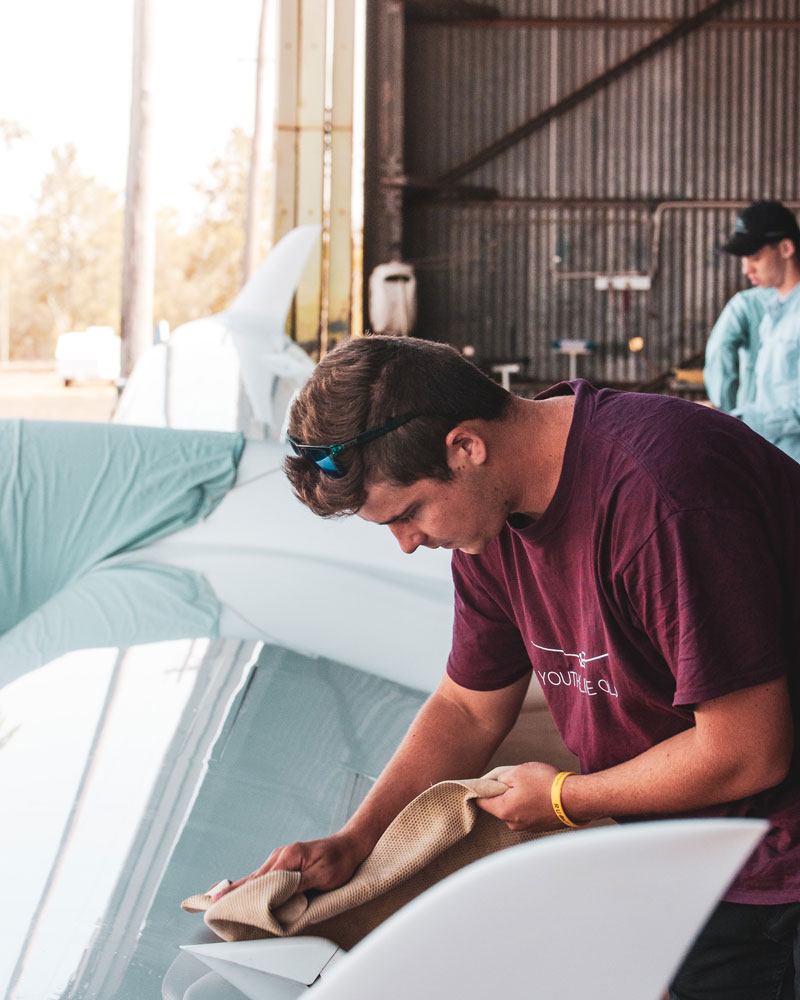 Aaron Hannaford and Bailey Seymour prepare the Kingaroy DG1000 for the day's flying.

On the final night, the clubroom filled with tired, flown-out juniors and their supporters for the presentation dinner. A past JoeyGlide competitor – 1SQN RAAF pilot Ryan Griffin – generously travelled to Kingaroy to be our keynote speaker. Ryan described how his love of flying manifested while flying gliders with his mates, especially at JoeyGlide, which led to his career. The next morning, some very weathered AJGC committee members collapsed into their cars alongside a procession of other juniors and their supporters for, in some cases, the very long road trip home.

We were lucky to have two of our own team create media material at the event. Aidan Curtis and Tom McQueen made daily recap videos and a highlights video, which are quality viewing. They can be found on YouTube or on the Australian Junior Soaring Facebook page. Enjoy, and thanks boys! 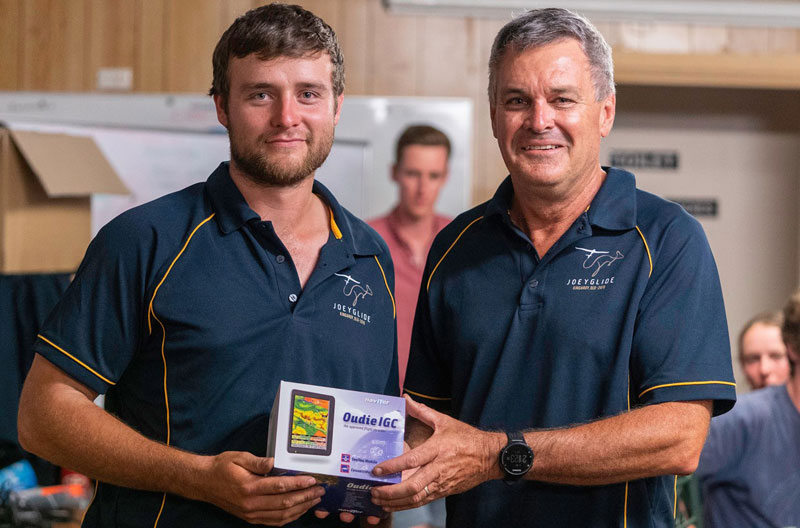 The Australian Junior Gliding Club would like to thank our long-standing sponsors for their continued support of our flagship event. In no particular order, this includes Aviation Insurance Australia, the Civil Aviation Safety Authority (CASA), Gliding Queensland, SkySight, OzRunways, GoSoaring and Naviter. Your support makes a difference in helping the next generation of junior glider pilots realise their potential.

The Australian Junior Gliding Club would also like to thank Todd Edwards and the Kingaroy Soaring Club for their generosity, genuineness and sometimes patience in helping run JoeyGlide 2019. Our Competition Director, Schmidty, his team of Safety Officers, our Coaching Coordinator Peter O’Donnell and weather expert Jenny Thompson were invaluable in helping us run a successful event. To Nev Donald, Rob Butler and helpers – thank you for launching us and cooking for us – your help is much appreciated. 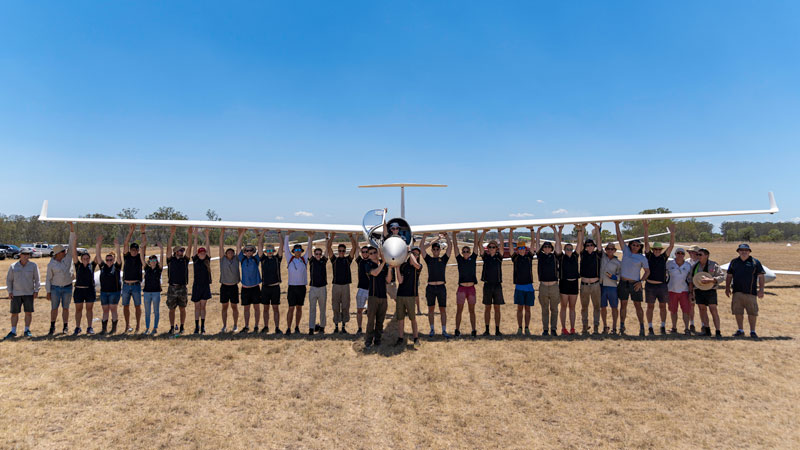 Are you keen to get involved, or know someone who might be? JoeyGlide 2020 will be held at Leeton, NSW from 7 – 16 January 2021. Further information is available on the JoeyGlide website, where you will also find the entries for both the competition and coaching program.
We are ultra-welcoming and supportive of newcomers and are always more than happy to answer your questions. Feel free to reach out to us on the website, email or Facebook. We look forward to seeing you at Leeton!

Website: oeyglide.juniorsoaring.org
Email: This email address is being protected from spambots. You need JavaScript enabled to view it.
Facebook: Australian Junior Soaring 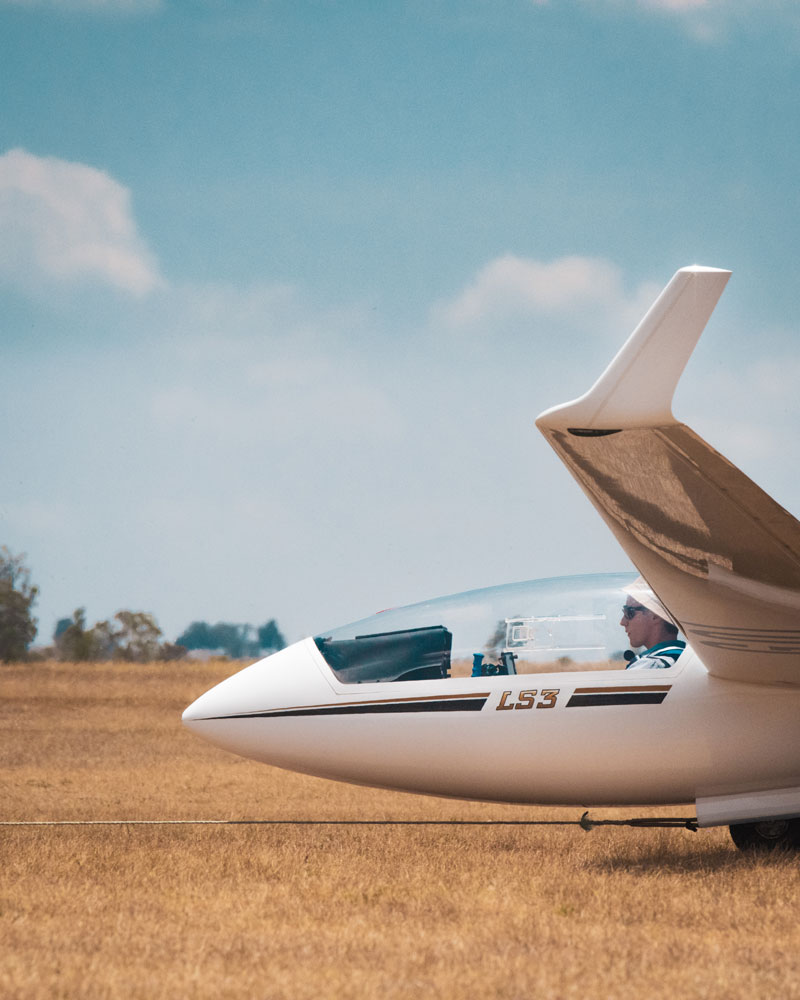 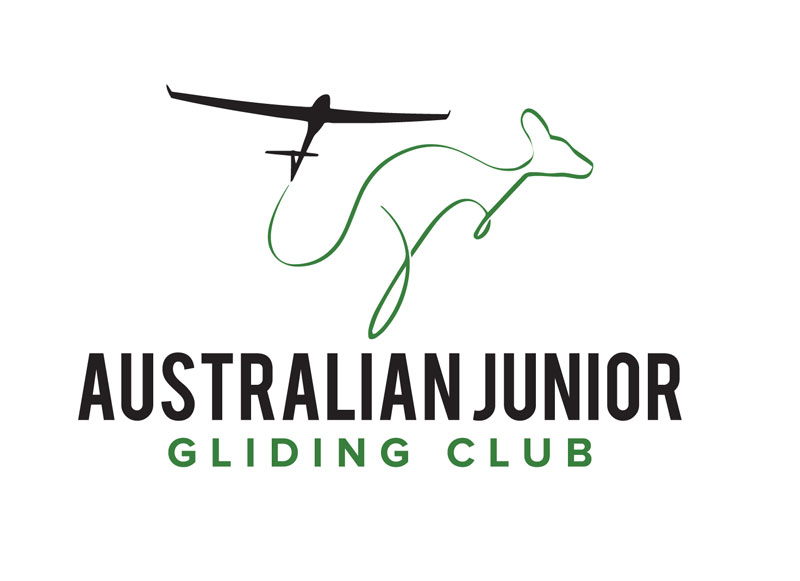 The AJGC is looking to organise an airworthiness training course in the second half of 2020. The training will consist of Replacement of Components, Form 2 and refinishing training, delivered by the GFA Airworthiness team. See Australian Junior Soaring on Facebook for information and expressions of interest.

The Local Series, as the name suggests, is a series of junior gliding events taking place at clubs in each state or territory in 2020. Organised by the AJGC State Representatives – who are also members of the regional committees – these events range from fun-flying days, to cross-country coaching weekends, to mountain flying courses and everything in between. Each region will see at least two Local Series events 2020. Watch Australian Junior Soaring on Facebook for more.