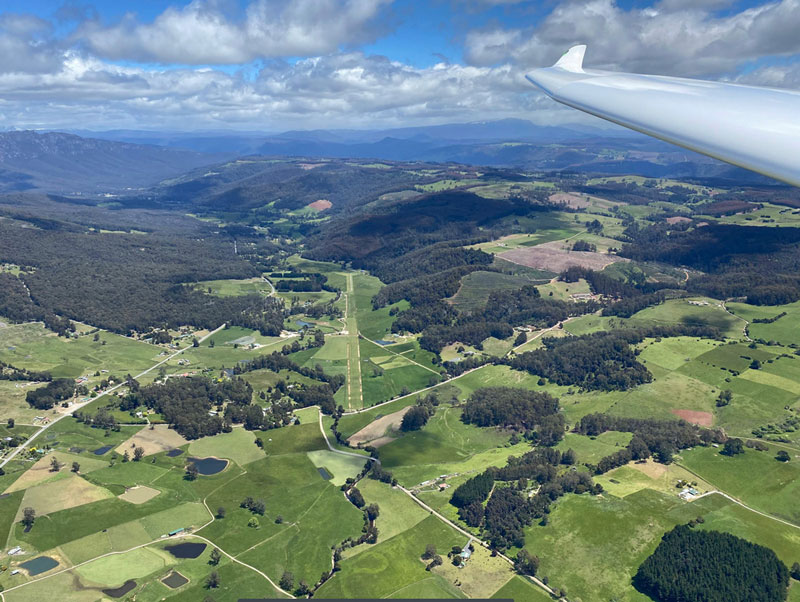 Flying above The Vale, you can see the 1,300m grass runway.

I have career and personal interests that intersect strongly in the realm of batteries and electric powertrains. Our family bought the first two Tesla Model S cars to be sold in Australia almost a decade ago, and to this day we drive almost nothing else.

We are fortunate to own a farm in Tasmania called The Vale thevale.com.au where we are in the midst of building a large renewable energy system solar, wind and batteries. Our intention is not only to power the farm buildings and houses, but also to produce transport fuel for vehicles on the property. On the farm today, that includes a Tesla sedan and a Polaris electric ATV. We fully expect to turn over our diesel tractors for electric ones in the foreseeable future, and to become a zero diesel farm.

The Vale also has another remarkable asset – a 1,300m grass runway nestled in the bottom of a river valley alongside a 4,000ft mountain called Mount Roland. The area is on the edge of the high country in Tasmania with multiple valleys and ridge lines in the vicinity that generate both ridge and wave lift. The only missing piece in the area to date has been glider pilots able to explore it! 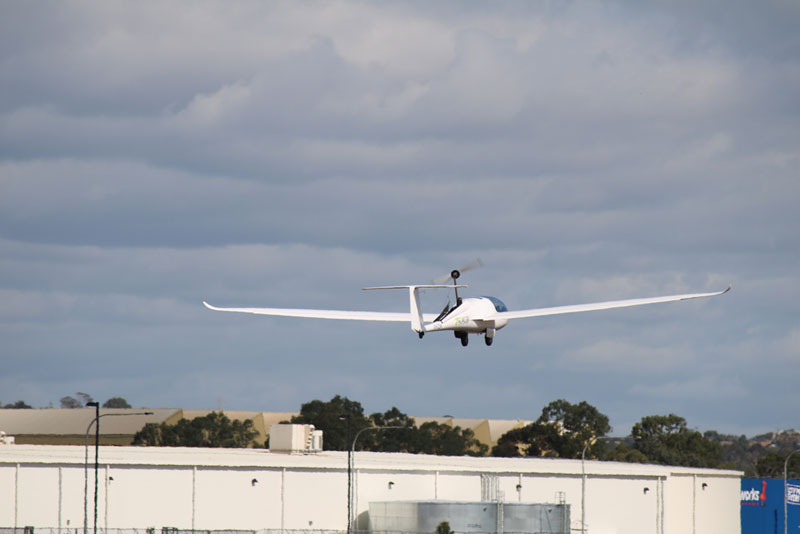 Taking off from Parafield SA soon after arriving in Australia.

What I wanted for The Vale was a sailplane that has two seats, because I love taking friends and family with me to experience the joy that I know so well, of soaring with the eagles. What I needed in terms of a launch system was something that can make use of the transport fuel I can manufacture on site – electricity – with minimal maintenance requirements.
While several electric-powered self-launching singles are available now and more are progressively appearing, my research turned up a few examples of self-launching electric-drive sailplanes with two seats. A two-seater platform is substantially more challenging than a single seater to self-launch with an electric drivetrain.

The first real contender I found was the Arcus E. This platform combines the successful Schempp-Hirth Arcus sailplane with the drivetrain created by Lange Aviation for use in their own single seat high performance sailplanes. Alas, it seems that this collaboration has not succeeded sufficiently for both parties to want to continue making it. 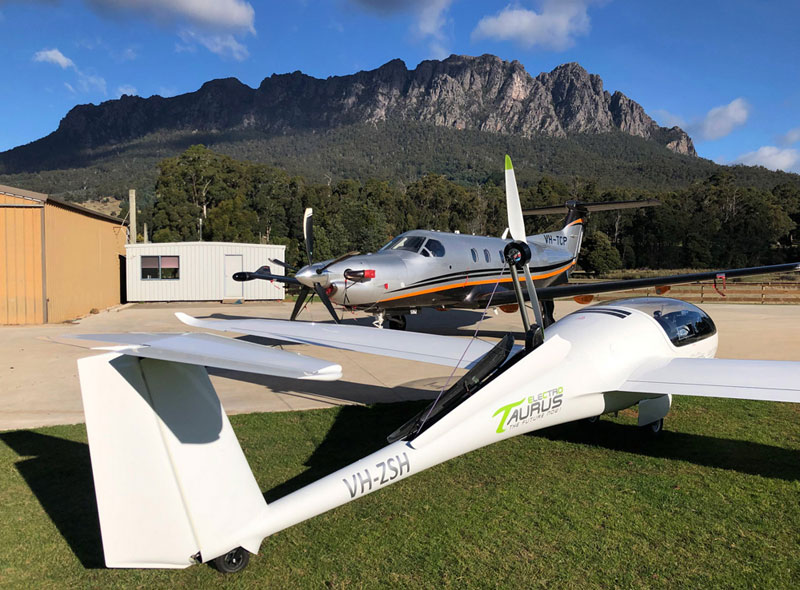 Mount Roland - directly to the south of the airfield.

I have a long history of flying and loving my Stemme S10-VT. I absolutely adore that aircraft-- except for the Rotax 914 engine. In that airframe and with the self-launch duty cycle, the Rotax 914 is an absolute maintenance pig.

My idea of a perfect sailplane would be an electric drivetrain in a Stemme S12-G. Unfortunately, to date, Stemme AG are not currently prepared to go down that path, although I have definitely tried to convince them!

Interestingly, a company started by Dr Reiner Stemme reinerstemme.aero in his life after Stemme AG is at work on the ‘Elfin’ - an aircraft that is precisely what I would like, in essence, an electric Stemme. I very much want to see Reiner succeed with the Elfin. However, like most aircraft startups, the Elfin project is already significantly behind schedule and it is unclear how much the current difficult world economic conditions will affect the aircraft making it out into the world. 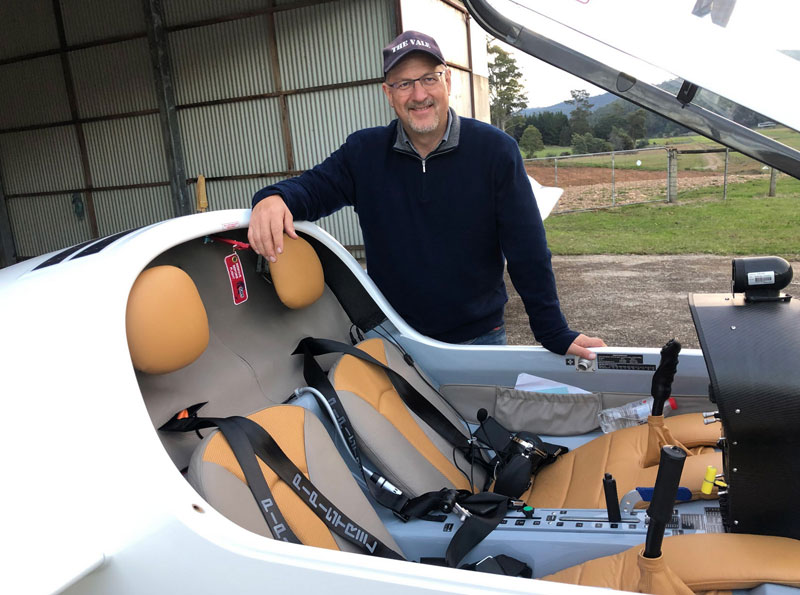 The cockpit is spacious and very comfortable with leather upholstery.

Most of the elements of electric drivetrains are pretty simple. Sufficiently light and powerful motors and inverters are easily obtained, and electronic control systems for them are straightforward. The hard part, of course, is the batteries.

Battery packs that safely store and deliver sufficient energy for the task at an acceptable weight have become available in the last few years. The available energy density continues to improve relentlessly, year upon year, due to the large and growing markets for both stationary energy storage and for the use of batteries in electric cars.

I have found just one manufacturer – Pipistrel – that has succeeded in making a two-seat electric self-launcher, putting it into serial production, and staying the course to keep it in production 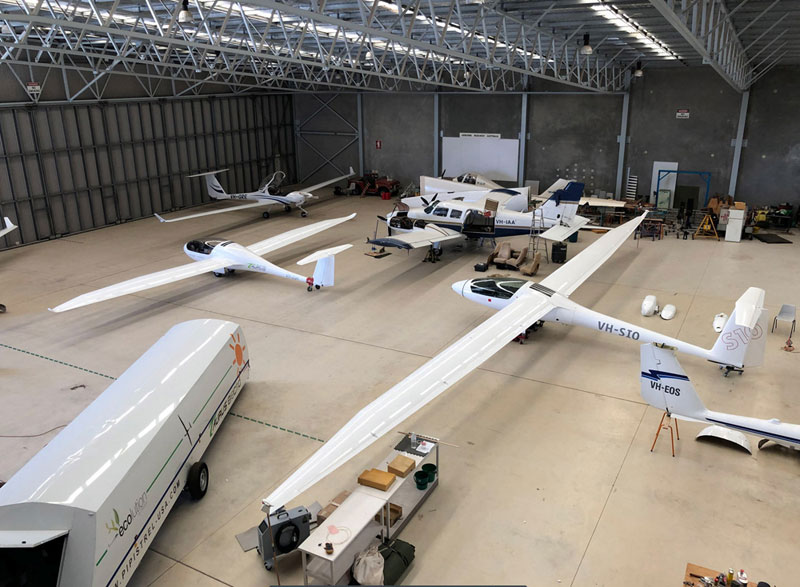 In 2019 I took delivery in Australia of the latest version of their electric sailplane, the Taurus Electro G2 pipistrel-aircraft.com/aircraft/electric-flight/taurus-electro/. After the aircraft turned up in a shipping container from Slovenia, we did initial check flights at Parafield Airport in South Australia. The airport operators were sufficiently interested in, or perhaps concerned about, this innovation that they arranged for us to have the dedicated use of one of the two main Parafield runways for our initial set of touch-and-go circuits.

That initial flight exercise was successful, so we packed the aircraft back into its trailer and took it to its intended home in Tasmania. I have now been operating the aircraft at The Vale for around a year.

The aircraft is really quite a remarkable achievement. The entire drivetrain system, including the battery modules and the electronic drive control system, are made in-house by Pipistrel, allowing a very tight integration between all of the system elements.

The Taurus is an ultralight LSA category sailplane. While its soaring performance is nowhere near that of the Stemme S10-VT, it is a really delightful aircraft for exploring the soaring conditions in Tasmania. It is light on the controls, responsive and easy to fly. The dual front undercarriage system, huge canopy and the side-by-side seating, like the Stemme, lead to easy handling, fantastic visibility and create an appealing, sociable and extremely comfortable environment for pilots and passengers alike.

The cockpit looks gorgeous with leather trim and instrumentation reminiscent of a sports car. The build quality is excellent, with a notable focus on the efficient and intelligent use of composites to fit everything, including the batteries and up to 190kg of total pilot weight, into a maximum take-off weight of only 550kg. 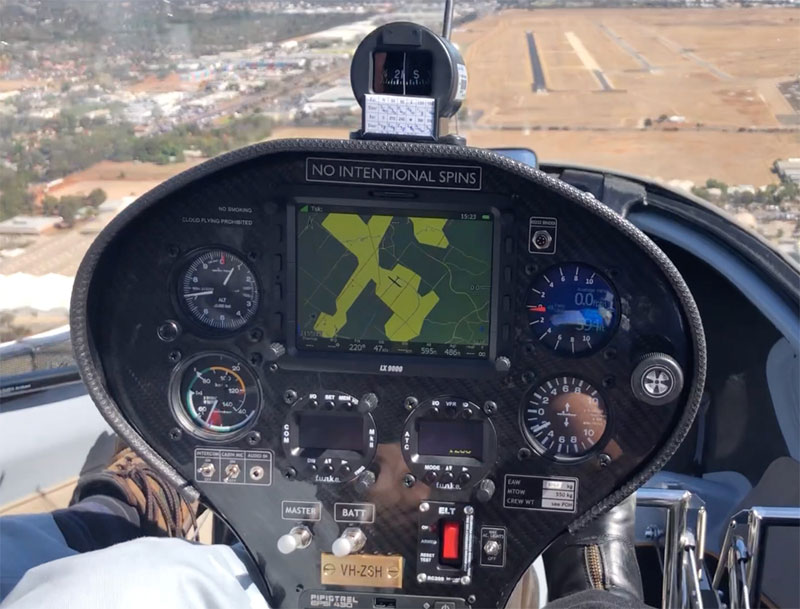 The instrument panel in the centre of the side-by-side seats leaves plenty of space and allows good visibility all around. 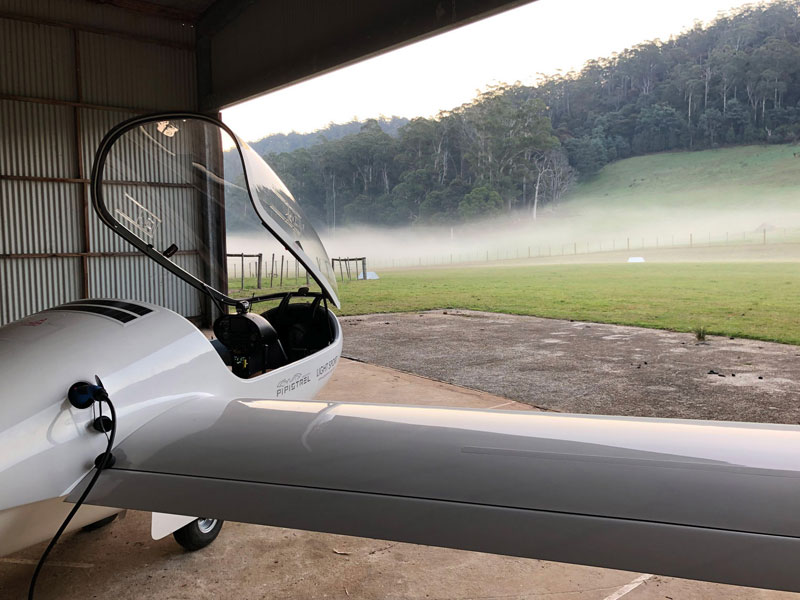 The Taurus being charged in the hangar at The Vale.

The electric drive system is extremely simple to use with only two switches and one rotary knob under a clear, easy-to-read colour status display screen. The engine sequence is automated, and begins by using the left-hand switch to enable the system.

Once enabled, the right-hand switch is toggled up to raise the propeller boom. Around ten seconds later you are ready to just twist the throttle knob clockwise to fire up the motor. The full 32kW motor power is available immediately with no warm-up time, and it launches the sailplane with a ground roll of less than 200m and at an achieved climb rate of the order of 4 to 5kts.

When you are ready to shut down, the throttle knob is rotated anticlockwise to bring the rpm to zero and the right hand switch is immediately set to the ‘down’ position – no need to wait for the prop to stop. The control system sequences the process of centring the prop, stowing it and shutting down, with no further intervention from the pilot. If you need power again later, it is available at immediate notice by lifting the right hand switch to the ‘Up’ position once again. It doesn’t get simpler than this.

This is very much a launch system, not a touring system. There is sufficient energy in the battery packs for a launch and climb, if desired, to around 6,000ft AGL. Typically I’ll use about a third of that before I have hooked into some ridge lift, found a thermal, or in winter entered the bottom of a gentle wave system that has a habit of setting up directly above the airfield! 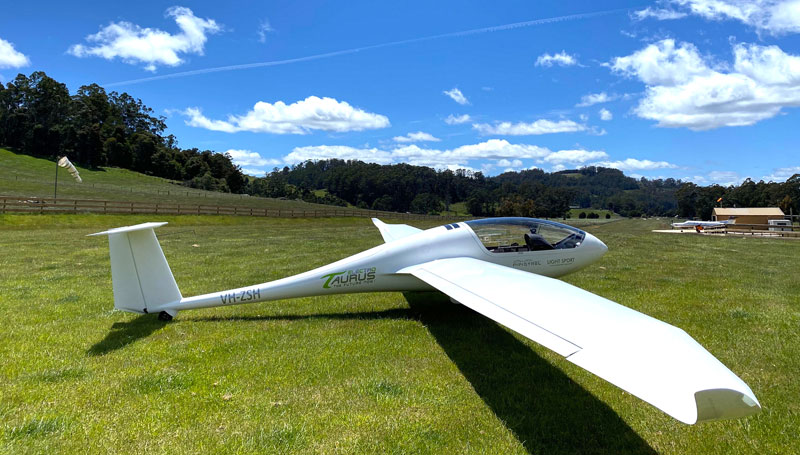 The Taurus at its home on Simon's farm, The Vale, in Tasmania.

The core aims I had for selecting this aircraft were the ability to produce my own launch fuel in a sustainable manner using the on-site renewable energy system, and an ultra-low maintenance overhead for the aircraft and its drivetrain.

I have achieved both aims with this aircraft. There is almost nothing to do in maintenance terms on the drivetrain. There are only two moving parts in the whole system – the actuator that raises the motor/prop boom, and the brushless motor that is bolted directly to the prop on top of that boom.

The motor has no maintenance requirements at all and has a nominal TBO of 2,000 hours. The battery pack is internally monitored and self-maintaining, with a built-in heating system to ensure the pack is at the correct operating temperature before power is drawn from the batteries, even when used in the air after an extended soaring flight at altitude. 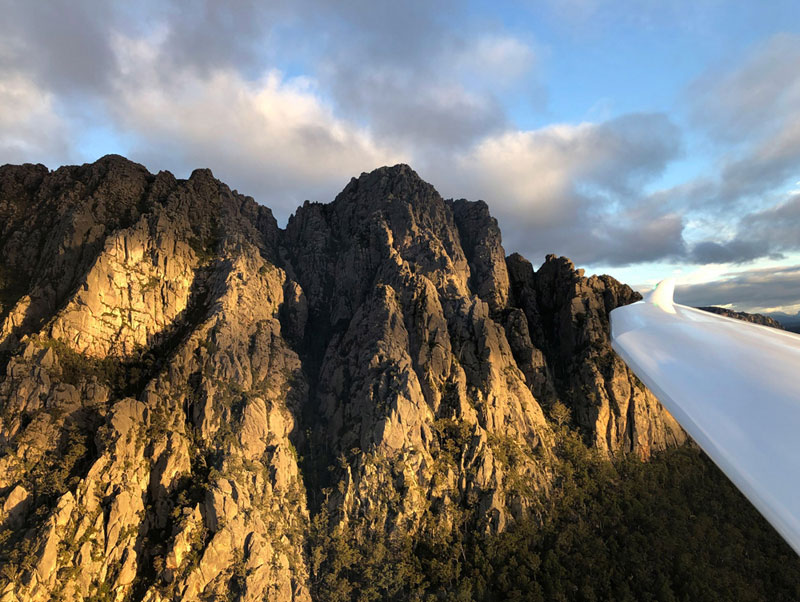 I would still love to be able to get more energy into the system to allow a longer ‘search radius’ and chase some more distant wave systems that I can see from my airfield but that I can’t quite reach. The one constant with the development of battery systems in the current era, however, is that they are continuing to improve. The Taurus’ two battery units are modular, so there is a realistic prospect of upgrading them in the future.

The Taurus Electro G2 has met and, indeed exceeded, my brief to find a two-seat, all electric, ultra-low maintenance self-launching sailplane.

I am sure that ultimately other two-place electric sailplanes will appear on the market, as battery energy density continues to improve, to offer other choices and other attributes in this emerging market. Bring it on! 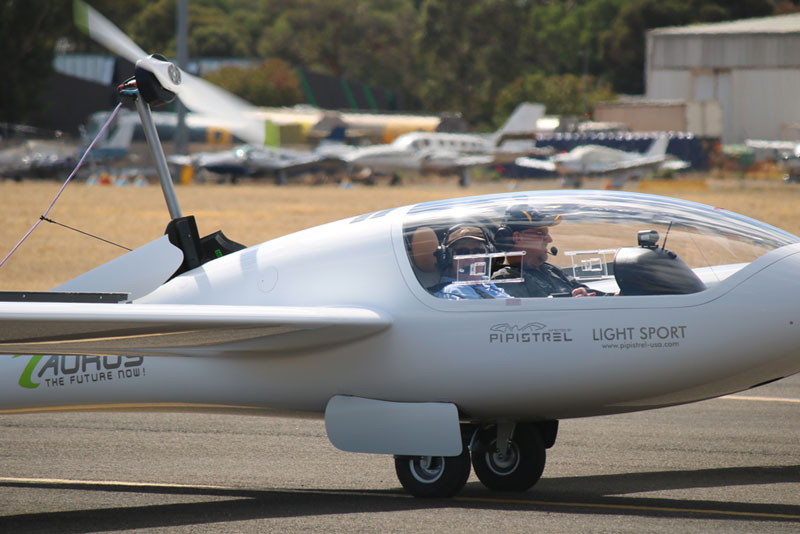 Ready for takeoff at Parafield Airport with Cath Conway who helped Simon with the inspection and paperwork to get the Taurus registered.