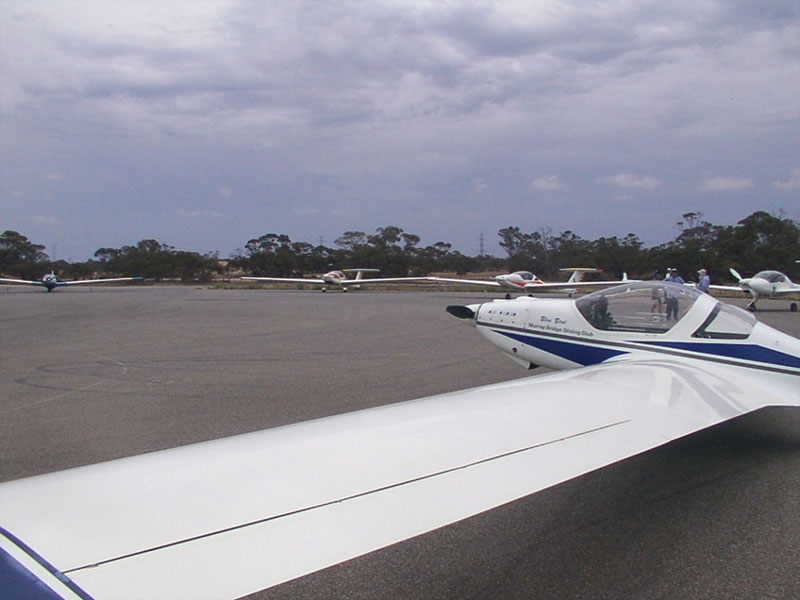 The fleet assembled at the Jamboree site.

A RED SUMMER
how Murray Bridge Gliding Club is coping

The Murray Bridge Gliding Club Inc (MBGC) first formed in the late 1950s and has, via a series of distinct evolutions, continued through to this day. The circumstances of early 2020 suggest that another, quite distinct evolution is unfolding – whether we are ready or not.

These previous club evolutions have included operating from a variety of sites, from bare farmers’ paddocks through to a fully serviced aerodrome, from sole occupancy to shared operation alongside both ‘tinnie’ and ultralight power schools, and the full cross section of ‘fun’ and serious cruising power planes and their owners.

We have also shifted from club flying supporting a large private owner fleet, to club-only operations of sailplanes towed by winch and later by aerotow, and eventually on to only motorgliders. Activities have encompassed club flying just around the home site, to involvement in contests and away camps through to trips to the Morning Glory 3,000km away.

At any particular moment, a gliding club is whatever its members at that time choose it to be. Thus, across six decades, MBGC has at various times morphed and then morphed again. Right now, the club is a motorglider-only club, with just one operational private syndicate motorglider supplementing the three club motorgliders. It operates from the busy private Murray Bridge aerodrome (YMBD) at 484 Reedy Creek Road, Pallamana, north of Murray Bridge.

The fact that gliding was the first form of operation when that aerodrome was in its fledgling state, to be eventually swamped in numbers by power traffic, is a fact now lost to most in the mists of time. Any awareness that ‘sail has priority over power’ has also been lost, so that now an engine-off motorglider in circuit can generate puzzlement among some in the power flying community.
For some time, the club gave the appearance of being just like the other 40-odd gliding clubs across Australia who have progressively vanished over the last quarter century. It had a stable membership of long term, ageing male pilots flying what they had and were comfortable with. A number of other gliding clubs in the region have had similar profiles at one time or other, and all have bounced back, each using a different trigger mechanism suited to their unique circumstance. 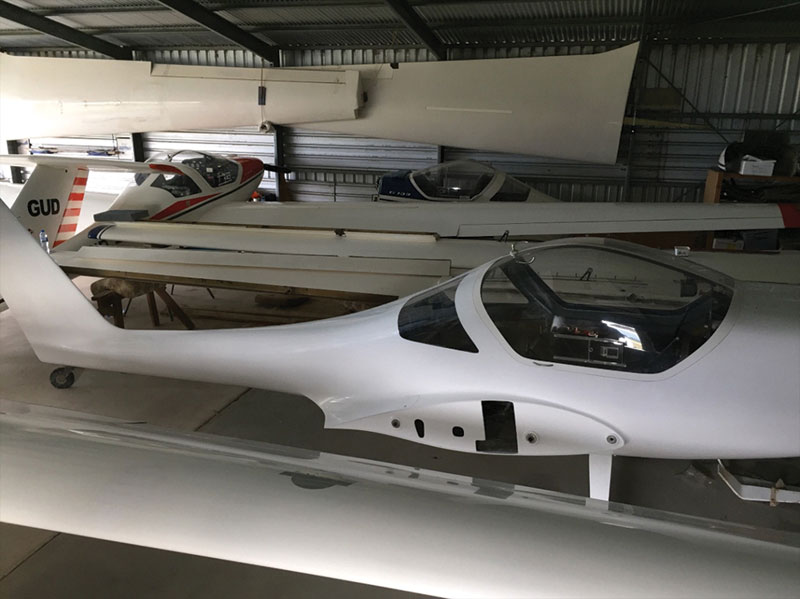 For MBGC, the triggers were a succession of decisions, some made with deliberation, some on the run. Some were made by the membership by consensus, some were driven by a specific proponent or proponents within the club. The private aerodrome location has benefited the club due to the benign support of the site owner, so that the facilities – even if limited in some operational respects – are appealing both for resident fliers and from the point of view of public appearance. Thus Pallamana is an attractive place to be.

The inevitable, problematic consequence of this site’s broad appeal is the large numbers of residents attracted to the site – more than 40 hangars and possibly double that number of based powered aircraft. A substantial basing fee needs to be charged for each aircraft to balance the recurrent service needs and capital inputs that the site owner meets.
The follow-on operational consequence is high sortie loads at peak times by the resident training schools, compounded by a narrow taxiway that also doesn’t extend to the runway thresholds. Within that context, MBGC made the decision to remain, supported by the presence of another site nearby that offers a cheap home – although without the attractive features – for part of the motorglider fleet.

The long term club members, sensitive to their duty to hand on an operating entity to the following generations, looked around for initiatives that would bring a continuous pilot cadre. For a time, nothing seemed to work – advertising, passenger offerings and participation in the 2019 Scout Jamboree. This last involvement grew out of another club member’s choice, beyond the others canvassed further below.

A motorglider club is not easy to align to GFA traditions of equipment and people going from ab-initio by training to solo, then training to cross country and contest proficiency, with equipment suited to each stage provided by the club. In this situation, the club does not support private equipment of current standard, and does not offer launches on-site.
So, instead of the normal procedures of updating equipment, MBGC planned to extend the existing fleet with complementary equipment of that earlier era as a cost effective way to harness the internal senior expertise and to increase the club’s asset value. It gives redundancy when one airframe goes out service with change-over capacity at servicing time. This approach also affords replacement parts in-house in the case of items that are no longer made. Finally, it means we can realise the dream of making the whole fleet available to support initiatives like the 2019 Jamboree.

The club was energised by the Jamboree date to get everything ready ahead of time, to support the event with both ground support and one-third of the motorglider numbers present. While the pilots had a great time there and the club benefited, but it didn’t grow the club toward a wider spectrum of pilots as might have been hoped. 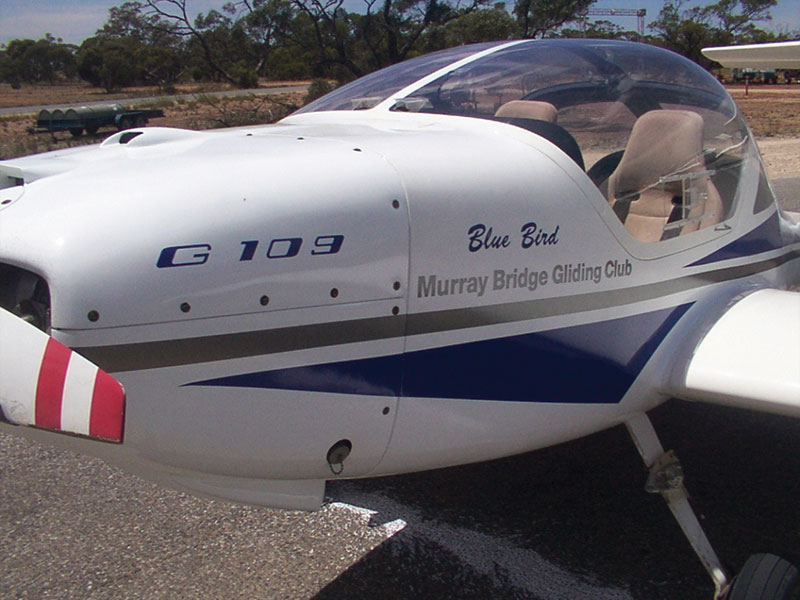 Fully refurbished, ahead of the 2019 Scout Jamboree.

What the revitalised fleet did achieve instead were other unexpected outcomes. Other gliding clubs with traditional sailplane fleets realised that motorgliders offer a structured way to do outlanding sequences, with inter-club synergies arising through MBGC doing those exercises.
The locally based power schools saw positive potential for some motorglider time for some students and perhaps even instructors, though this is still a work in progress. The main beneficiary is a slight built pilot who can’t operate the rudder in Cessnas where the pedals aren’t adjustable.
Along with an increase in public interest in flying evident at the three power schools on-site in more recent times, the gliding club too has gained members. This growth was helped both by the available fleet size and the visual presentation of each motorglider, arising from the previous frenetic year of work by members. That preventative maintenance work is also noticeable in the more routine on-going maintenance now, which for the moment at least gives the newer members an unrealistic view of the actual amount of hangar time needed to keep airframes with engines in shape.

MBGC doesn’t chase proficiency badges or contests, since the equipment doesn’t suit the requirements. The cross country aspects can be quite differently acted out in either touring mode or engine-off in good weather, though quite slowly. As a result, the club won’t be visible in these GA achievements listings pages.

On the other hand, there are some things a motorglider-only club can do well, in line with the GA Issue 51 ‘2019 member survey’ listings. Such a club can book individual flights to a set time program, which meets contemporary ‘hire&fly’ expectations for time poor citizens. Almost irrespective of the weather, known flight time can be provided, and less need for support crew means independent operations are possible so that personal availability extends the days of the week that can be flown.
Those potentials were evident when a number of club members were out at firegrounds for several months during the 2019/2020 bushfire season. Club activity could be maintained locally, though the club couldn’t go away to camps and regattas during this holiday season.
Therefore, significant rationale exists in the GA Issue 51 ‘2019 member survey’ suggestions for a widening of GFA member servicing arrangements. Because this broadens the offerings non-traditional clubs can extend to the public interested in gliding on their terms, it makes gliding in the broad more accessible and grows the sport.

Now, the emergence of COVID19 brings further complexity to gliding club operations, notably for flight training. In the motorglider situation, it is practicable for solo flying to continue with minimal ground crew interaction. The club supports this with antibacterial cleaning protocols before and after flight of external and in-cockpit contact surfaces. This permits pilot currency to be maintained, ready for future return to ops-normal for the club.
For the motorglider operation where no ground crew are involved, flying training depends on the awareness and collaboration of both persons on-board. Where individuals prefer not to, the currency and training is picked up at a later time. Where flight training is arranged, each pilot and the club are responsible for behaviour favouring healthy outcomes, determining whether dual flying is discouraged or proscribed.