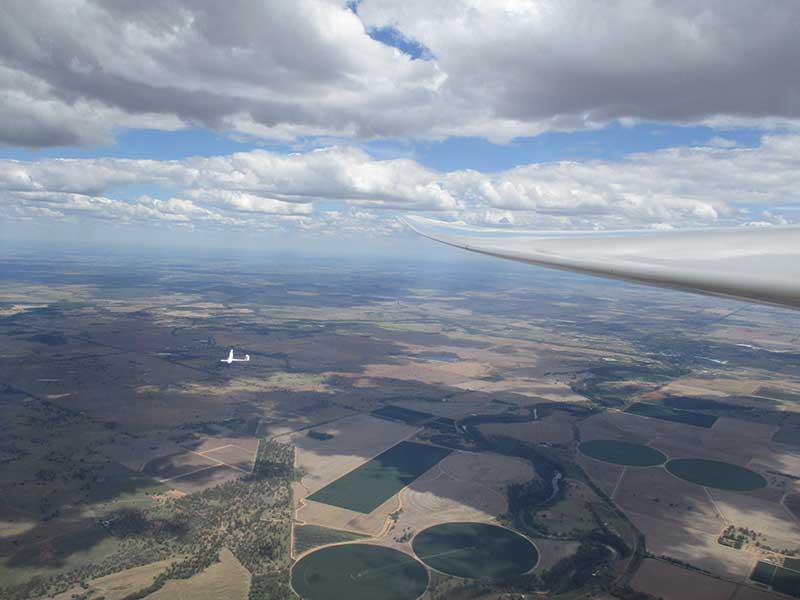 The NSW Coaching week was delayed from November to February due to the continuing ‘big wet’ in Eastern Australia. The new timing of the course turned out to be perfect. As the date approached, the weather pattern changed from multiple low pressure systems swirling across the top end, feeding vast amounts of moisture south to a dominant high pressure cell over inland Australia, with a blocking high in the Tasman sea. Instead, the weather set-up was about the best we had seen all summer.

In anticipation of a great flying week, I towed my glider 200km from Pipers Field up to Narromine, along with the course organiser Armin Kruger and several course attendees and club gliders. 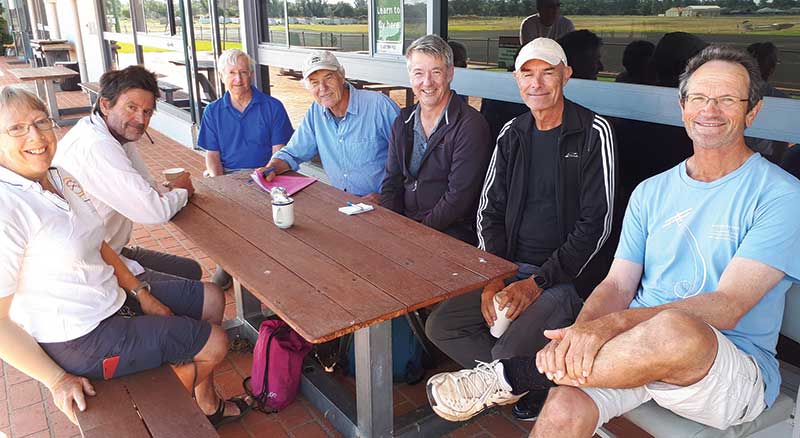 The course started each day with weather briefing given by Allan Barnes, who also gave tips on getting the most out of Skysight for planning your soaring day. This was followed by talks from the various coaches on a different subject each day.

On the first day, Armin talked about thermals. During the rest of the week, Kerry Claffey gave a talk on preparation for the flying season, Nick Singer presented on health and flying, Bruce Taylor discussed speed to fly tactics, and Richard Frawley looked at thermal safety and etiquette. At the end of the week, after flying under cumulus every day, when the task area for the day was largely blue, Allan Barnes discussed strategies for flying in the blue. 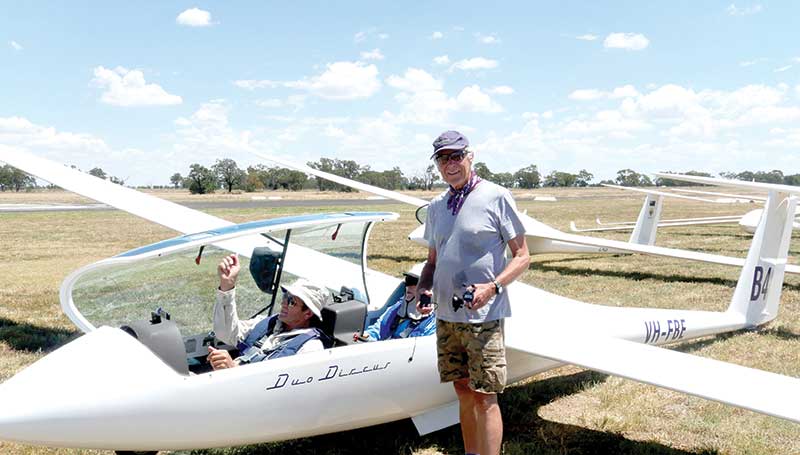 TASKS EACH DAY
Assigned Area Tasks (AAT) were set each day with fairly large circles allowing a good deal of choice of where to fly and distances that could be achieved. The weather was warm with cus to 8 - 9,000ft and little wind each day except for the last day, when our blue flying skills were tested.

Pilots had the opportunity to fly in a two seater with one of the coaches each day. Two sorties a day in each glider were flown, lasting about two hours each. Flying with experienced competition and cross country pilots was greatly appreciated by the attendees. 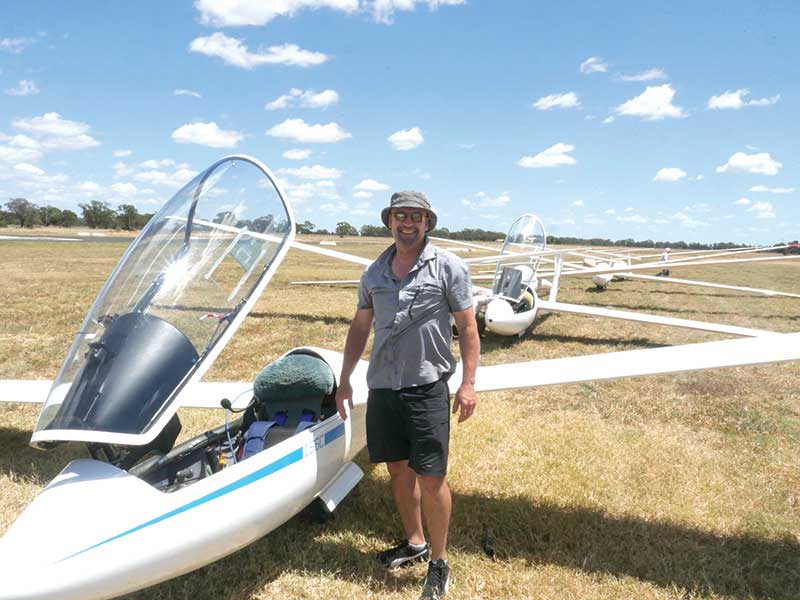 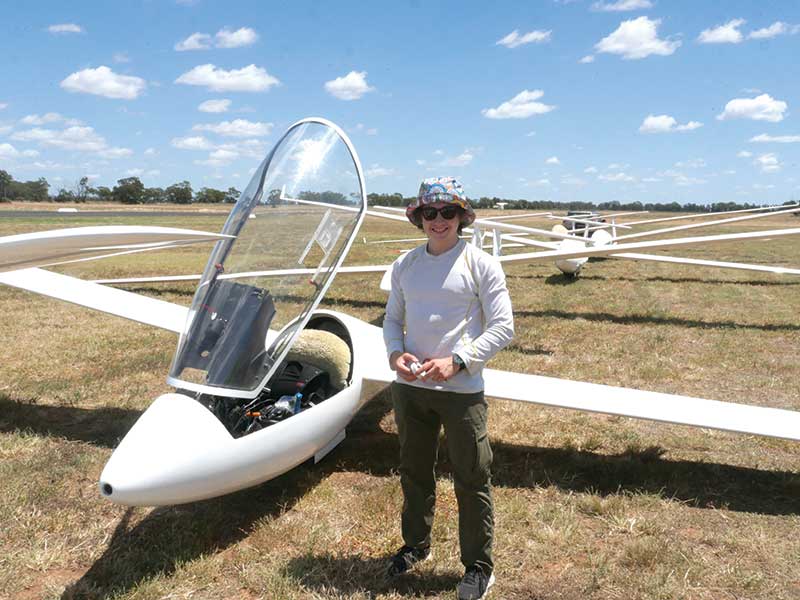 LOOK UP!
One morning Jacob Bloom, who had flown the previous day with Bruce Taylor, talked about his flight and described it as an invaluable learning experience. Jacob flew from the back seat, and said the most interesting aspect was seeing how much time Bruce spent looking up at the clouds, intently assessing where the best areas to climb would be. 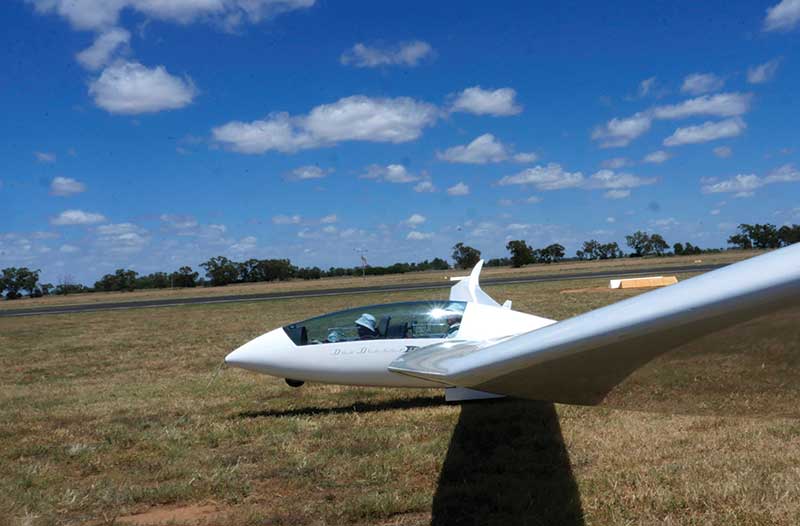 Duo Discus from Lake Keepit and Narromine, plus a DG 505 were used for coaching during the week.

This is a theme Bruce returned to several times during the week. He emphasised the need to closely examine cumulus as you approach them. He stressed that you should look straight up at the clouds when you are underneath them, and discussed the ways of determining the areas of strongest lift. I have been looking at clouds for many years. But after hearing Bruce’s advice, I spent the rest of the week looking ever more intently at the curling wisps of water vapour as they rose into the base and edges of clouds.

When Armin first mentioned the course to me in November, my ears pricked up when he said that Allan Barnes would be doing lead and follow. I was excited when, on the second day of the course, Armin allocated me to follow Allan in his LS8, with me in my ASW20 and Niall Doherty in his LS10.

The coaches and attendees gathered after briefing on the last day of the week. Tug pilot Sebastien Maron (end right) tirelessley launched and retrieved all week.

Allan had been a hang glider pilot for many years before flying gliders. He has won seven Australian National Championships. He has also flown in World Gliding Championships for New Zealand and Australia in Club Class, and for Australia in Standard Class. He holds several Australian gliding records including a 20m Two Seat Free Distance record flown on 31 December (see page 9 for details).

I have flown with coaches in two seaters and found it to be an intense learning experience. But I had only limited lead and follow experience and I was keen to see if I could keep up with a top competition pilot in my own glider.

THE THERMALS YOU REJECT...
It’s one thing to learn the theory of flying cross country at speed. It is another thing to actually put your knowledge into practise in the sky. Ultimately, it’s the thermals you reject that make your flight the best. 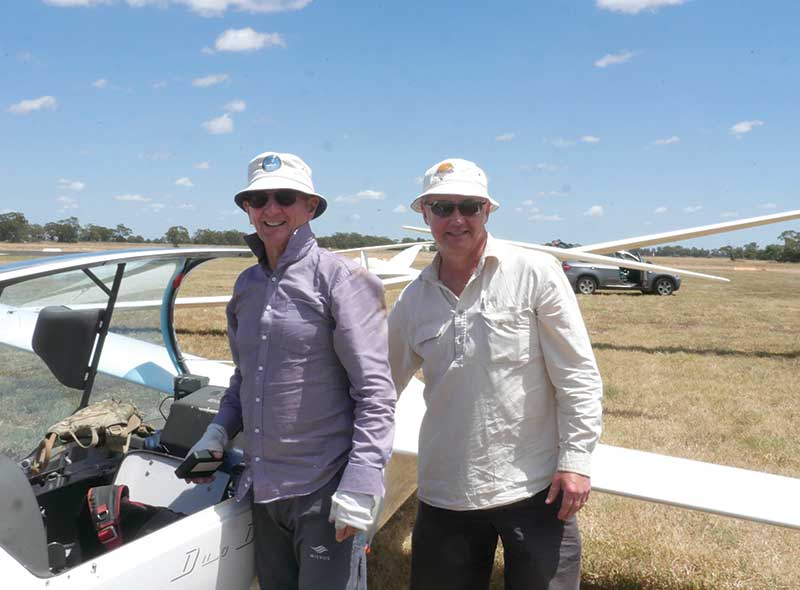 Niall Doherty flew his LS10 and had a coaching flight with Matthew Atkinson in a Duo Discus.

It was a good soaring day with cu to over 8,000 ft. We expected 5kt thermals or stronger. So, we would only stop to climb in 5kt or more. ‘What does this one feel like?’ Allan asked. ‘Only 3kts,’ Niall responded. On we continued until we found our prize, an 8 kt thermal.

I have heard it said by many pilots that what slows down your cross country speed is climbing in weak thermals. But, by following Allan, it became clear that it is the tenacity of the pilot to stick to the plan – find the strong thermals, don’t waste time with weak ones – not mastering the theory, that makes the difference.

Of course, you also need the skills to fly your glider at its greatest efficiency and read the sky to place your glider in the right place at the right time. This is why coaching courses such as this one are so valuable. You practise with top pilots and hone your skills in a concentrated way. This is true flying a Duo Discus with pilots such as Bruce Taylor or any of the other coaches on the course. 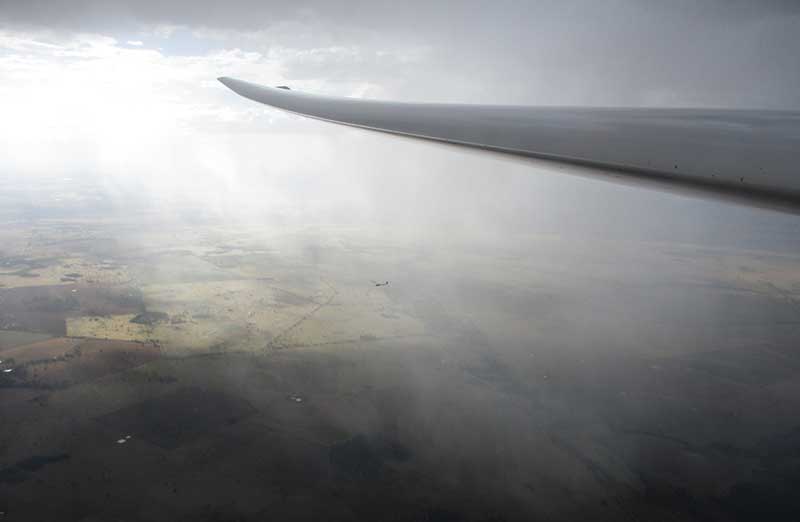 Allan Barnes and Sean Yound flying between rain showers on the way back to Narromine.

Decision Making
But I found it even more valuable flying my own glider alongside Allan. In a two seater, the coachee does all the flying. Flying lead and follow, on the other hand, the coach is flying as well and you can watch how they do it. You can see the decision making in real time – the choice of where to fly under the cloud, for instance, or in the blue to the location of the strongest lift. You can observe as they choose to fly left or right of track to keep in the best air, and the decision to leave a thermal after a quarter turn and move on to the next one.

I learned another valuable lesson, once again, not as a theory, but by flying it. I have heard the theory that you should aim to fly in the top third of the convective layer. So, if it is a 10,000ft day, try to keep above 7,000ft. But Allan was happy to use the top half of the convection layer. On our 8,000ft day he saw no problem continuing his search down to 4,000ft. Indeed, he was confident enough to continue down to whatever altitude it took to find a strong thermal.

He pointed out that it doesn’t matter how low you are if you believe there are still strong thermals ahead of you. The important thing is to assess the conditions ahead. Is there still strong thermal activity ahead of you, taking into account the time of day and all the other factors? If the answer yes, there are thermals ahead, then go find them. 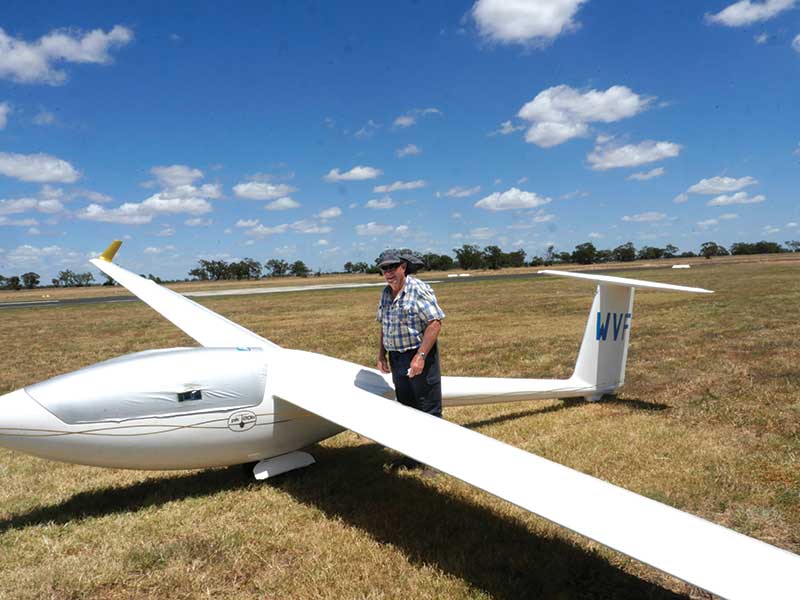 Brett Edwards Pik 20b getting ready to launch. With its gold winglets and go faster stripes WVF was the sharpest looking glider in the fleet.

Unexpected Skills
Competition pilots always say that flying comps greatly improves your cross country skills. Out of necessity you learn to soar in all conditions. Every mistake, each extra turn in a weak thermal that you make costs you time. You can see how your flying compares to the other pilots and learn from their mistakes as well as your own.

Not everyone is interested in flying competitions for a variety of reasons. But flying on cross country courses such as this one is in many ways like flying a comp – especially if you get to do some lead and follow. Fortunately, we had great weather so I didn’t have to practise my grovelling skills. Instead, I practised my leeching skills and had a masterclass in disciplined, skilful cross country soaring.

I am being a bit unfair to Allan with that description. I only ‘leeched’ off him on that first flight. I flew lead and follow on four days and after the first day, he insisted that I fly with him and share in the decision making and thermal selection. This was also a tremendous learning experience. 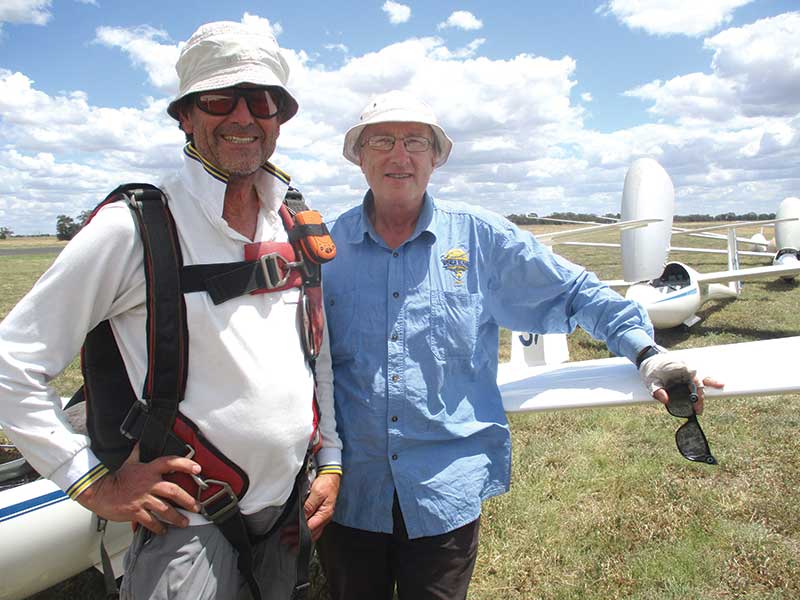 Allan and Sean at the launch point.

Niall and I both flew with him one day when we were sent out ahead of him and tried our best to work together, making all the decisions ourselves. Allan was always above us, acting as our guardian angel.

We did get into a bit of a sticky situation when neither Niall nor I could find the centre of the thermal under a perfect looking cu. We got lower than we were comfortable with before moving on to the next cloud where we climbed back up to cloudbase and were on our way again. We wasted a good 15 minutes under that cloud and, had it been a competition day, we would have been left at the back of the fleet. But that was a lesson we needed to learn.

Twilight Skies
After a week of constant flying, excellent presentations and discussions, great company and camaraderie, the course concluded.

Beryl and Arnie Hartley and Sebastien, their tug pilot for the season, ran a smooth and professional gliding operation. The Narromine Soaring Club clubhouse is always a pleasant environment, right on the airfield apron with wonderful twilight skies in the evenings. Beryl provided delicious food. The coaches were all so generous with their time and energy. They shared their knowledge and enthusiasm for the sport they love. It was wonderful to be part of the experience.

What a great week it was. Whatever your level of flying experience, make sure that next season you participate in one of the coaching courses in your state. If you want to share your knowledge, then become a coach. If you are a competition pilot, come and teach us how to do it. For everybody else, sign up for a week of flying with great people in a structured flying environment.