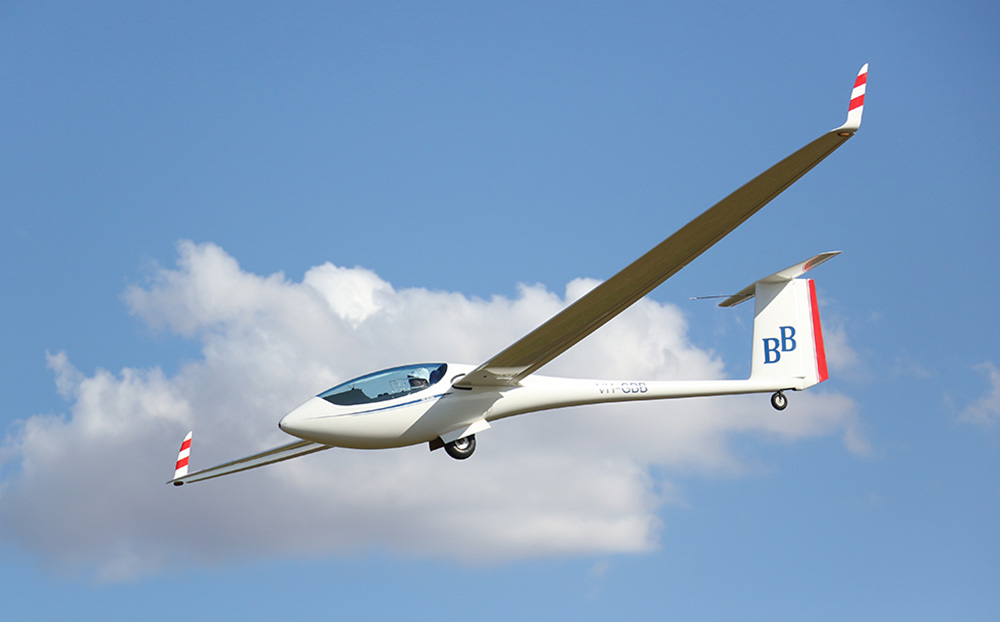 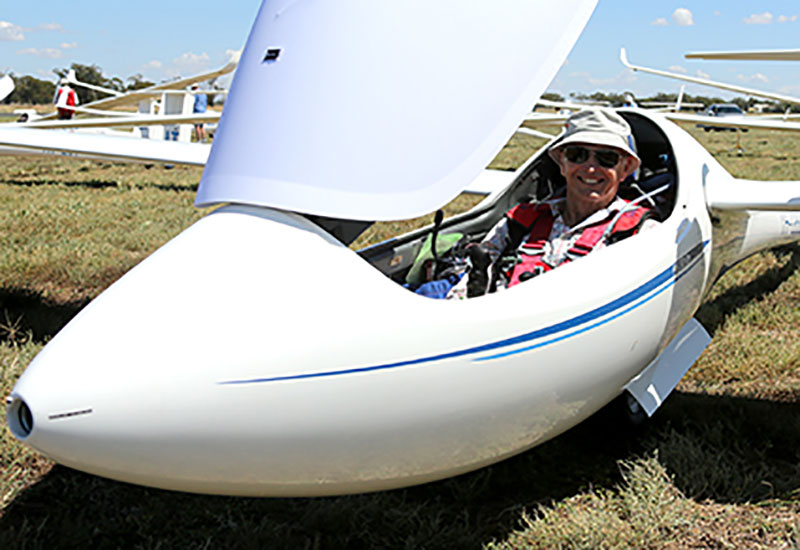 By Beryl Hartley
In keeping with plans for other competitions during the Covid restricted period, Narromine had to be planned at the last minute, as other sites were cancelled. The competition was not listed as a selection event for the World Championships in 2023. Accordingly, the local club had genuine doubts about the event meeting the class size rules.

However, just days prior to the start, it was clear that the required numbers had been achieved and that the standard of entry was exceptionally high. When the time came to confirm positions and tasks for the willing workers, Jenny Thompson packed up the dogs and arrived to take the role of Contest Director and fill numerous other roles for the two week event. 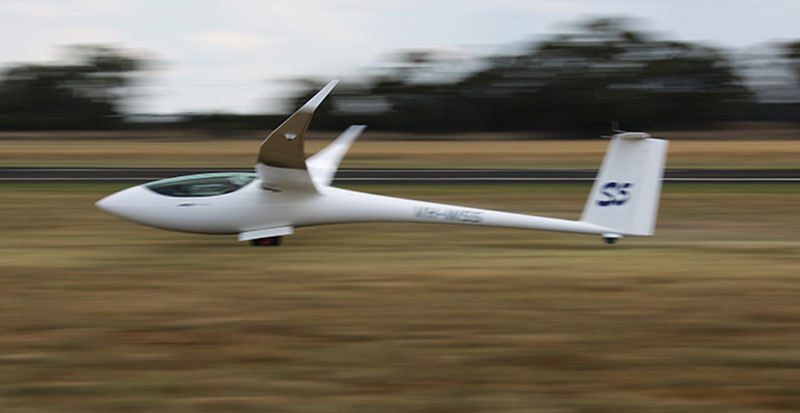 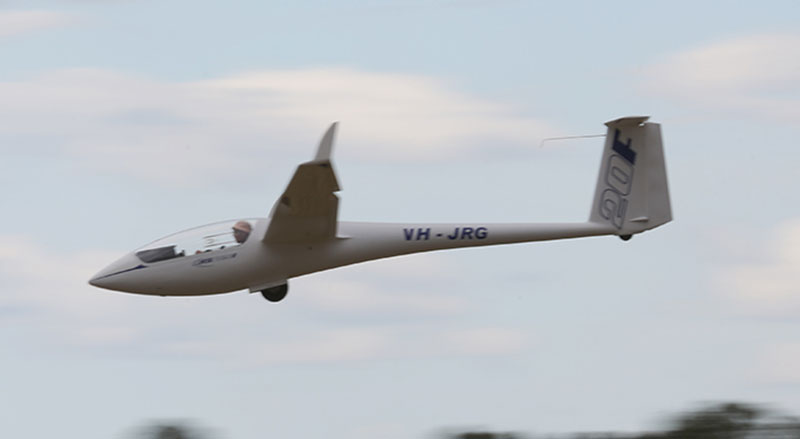 Kerrie Claffey and Jacob Bloom organised and ran a world class flight line. Mick Webster was the assistant to both Jenny and Beryl Hartley for task setting. Bill Bartlett and Paul Tridgell brought the new super tug BearHawk, and Sebastien Maron and Arnie Hartley made up the tow team.

Ian Steventon and Neil Campbell were online to produce quick scoring results. The Angels from Alice Bernita and Grant Anderson came to help and managed almost every task to ensure a smooth operation. To these committed few, heartfelt appreciation was expressed at the presentation evening.

Eight competition days were completed. The late March weather was kind to all, and an interesting mix of tasking and weather produced some excellent results. 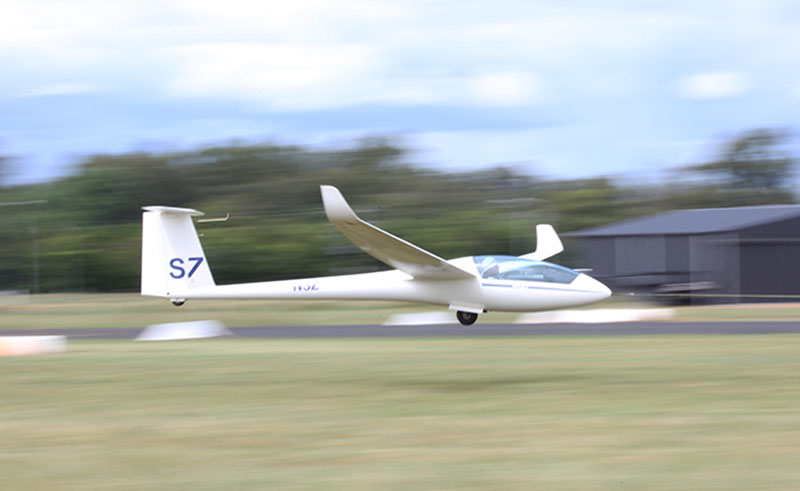 Allan Barnes flew his LS8 in 15m Class. Due to the low number of Standard Class entrants, 15m and Standard Classes were merged. This resulted in some difficult handicapping anomalies. Gliders in this combined class included three LS8s, a Discus 2, Ventus3, Ventus 3, JS3, AS 33 and Matthew Scutter's Diana 2. 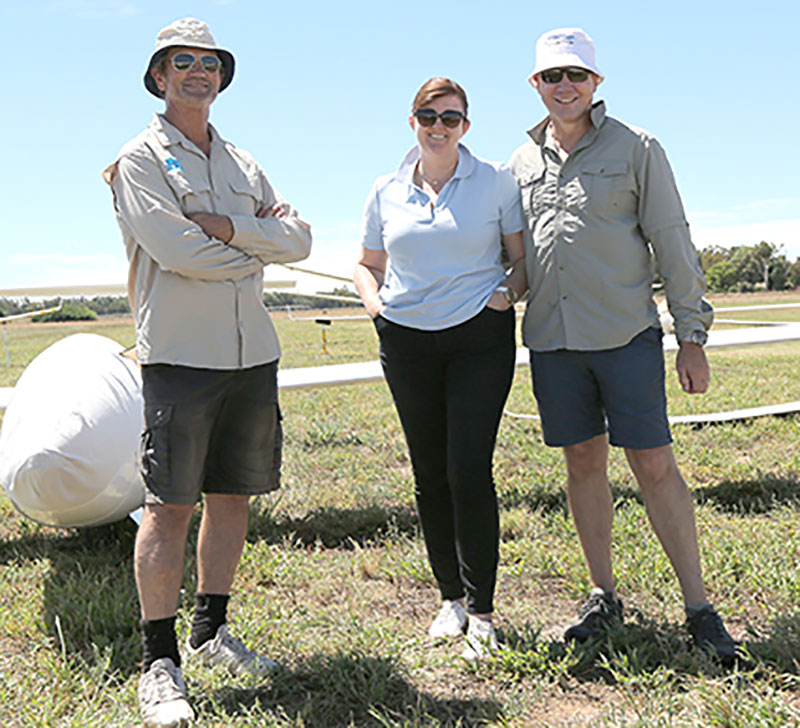 In the 15m Class, Matthew Scutter won four days with speeds up to 134kph. John Buchanan won two days with the fastest speed for the event at 140.61kph. Adam Woolley and Toby Geiger were winners on one day each.
Club Class was dominated by Jim Crowhurst with six day wins and speeds up to 120kph, and Jack Hart and David Collins each won a day.

The weather held off on the last day, only raining as aircraft finished and were rushed into hangars and trailers. The presentation dinner held in the auditorium was a fitting end to a successful two-week Championships event.

Matthew Scutter in his Diana 2 - FES

BY Matthew Scutter - DIANA 2
Full throttle racing. The trough is very close now making for deep cumulus and very strong thermals.
I have never driven the Diana 2 so hard, cruising 120kts between 6 to 8kt climbs. Following the JS3 at these speeds is a lost cause, but I can't complain too much because at these cruise speeds the 15's all went through the LS8s like a knife in hot butter. 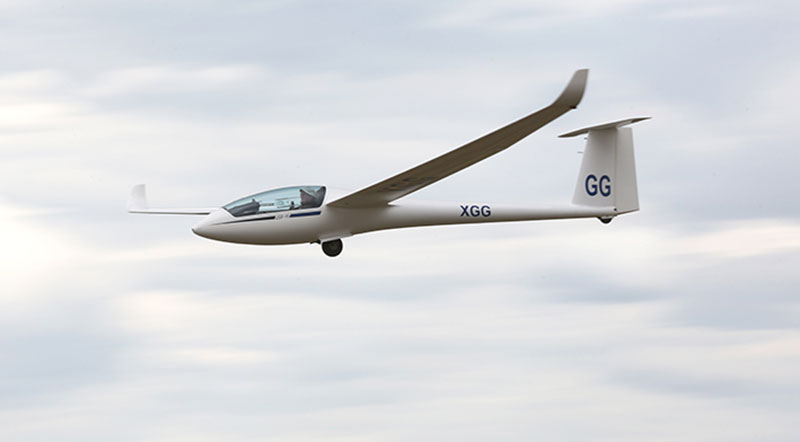 Mick Webster from Hunter Valley in his LS8.

Adam Woolley and I raced down the first and second leg before a difference of opinion saw us part ways. With 146 kph on the clock at the top turn I thought planning on a possible 155 kph final glide was prudent but that required maxing out the sector, crossing a big blue hole. I saw Tobi opt to head home directly here, but I was blinded by the insane speeds and went for the maximum. Coming back across the blue hole I needed the last climb to be a clean one, so I deviated 40 degrees to a chunky towering cumulus and found... absolutely nothing. After a few smaller wisps delivered nothing I resigned myself to a 110 degree deviation to a fire, picking up a climb from 1500ft and slowly stumbling home 15 minutes overtime. Not ideal. Commendations to Tobi for having the foresight to bank what he had.
Average glide 104kts at 60:1. 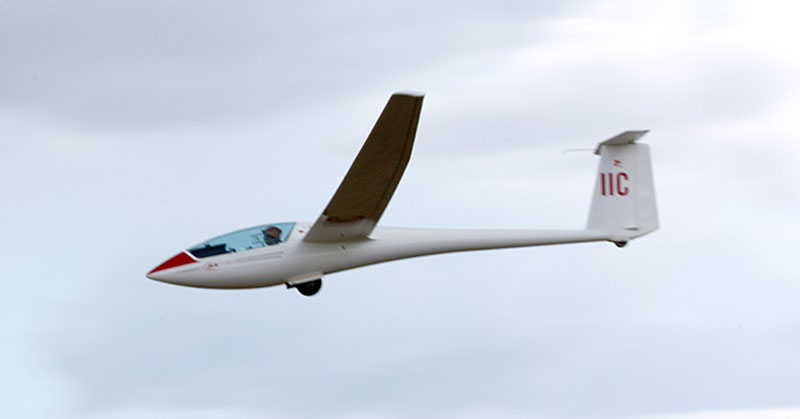 On 12 March, I smashed it - short task due to forecast storms which did end up blotting out part of the second sector, requiring almost maximum distance in the other sectors. The key decisions were to go right to the edge of the storm, which let me turn shorter in the last sector, staying with the good cu, and an aggressive gear change down when we turned off the downwind leg that saw a lot get low.

A few rest days are probably on the way in the foreseeable future - time to do some washing. 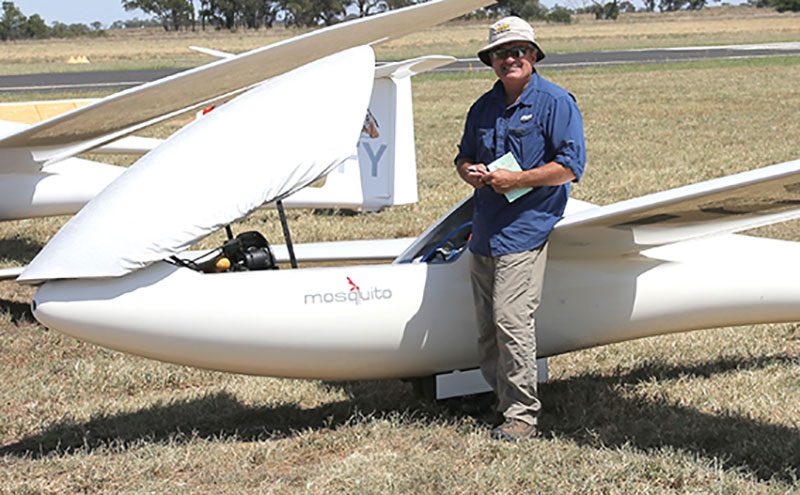 The 14th was a straightforward day with the first task we have used the PEV markers on for the start. They turned out to be largely unnecessary as the task was sized well to the window available so we all went more or less as the gate opened.
We had less streeting and lines of lift than previous days, which is not good news for the Diana. I think it does better relative to the JS3/AS33 when it's dynamic flight rather than boring holes in the sky, so John just flew away from me. Average glide speed was 106kts but only at 45:1!

Still waiting for some trickier weather to eventuate... it's getting a bit boring with screaming cu every day.

The 15th finally brought weather that requires more skill than pushing the stick full forward. A moderate breeze and bands of high cloud rolled through the task area. 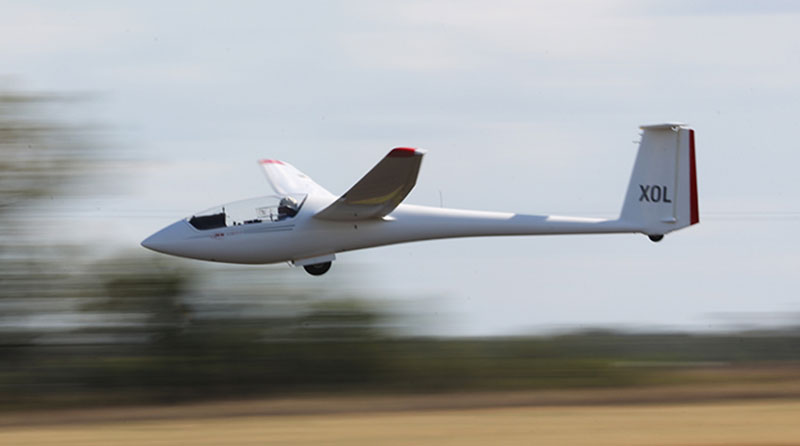 Mark Goodley in his ASW20C.

Each band of cirrus required planning to make sure you were high going into it because, except for a bit of cloudsuck, the air was still.

The key decision was to not push your luck at the end of the day and risk coming in undertime, rather than risk being out in the end of day coupled with cirrus still drifting over. As it was, I came in 15 minutes later than planned, but those who stretched it paid dearly.

We had another challenging day on the 16th, but right in my court - big climbs and big storms. Taking it easy and not taking any risks that could upend the comp for me turned out to be a good strategy for the day with very tricky conditions working both sides of the storms. I probably got the last clean climb of the day to get home.

I had a good, fun day on 10 March, but it always feels that way when you win the day against seven other Australian team members! It was all won and lost at the start gate in reality. My thinking today was that heavy cu to 7,500ft means I can do my own thing, I don't need other's help or distractions. The day was predicted to get softer around 1630-1700, so it seemed likely that I'd catch the front runners up when the weather got softer. Which is what happened. 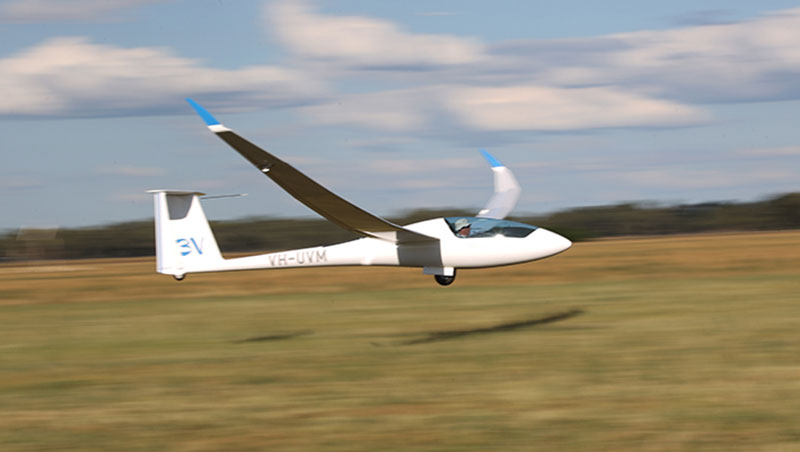 That's racing! The 11th was a fantastic day in the saddle all the way until the last leg. I was averaging well over 140 kph for most of the flight, then dropped back to 138 kph on the last leg. I could see the problem unfolding, but couldn't do anything about it, taking a 75km glide from 7,000ft down to 1000ft agl to pick up 2.7kts to final glide. I finished with a miserable 132 kph in the end, dropping to 4th overall.

On the final leg, I turned for home at the extremity and on time. The problem that I saw ahead, as mentioned, saw me slowing down to maximise my chances. One 5kt climb at mid-convection under a good sky should have brought a far different result, but I was dealt the other hand.

That's racing. Living the glider and the class was so much fun, though I just wish I were 2nd today. But we make the decisions we make and I have to live with it.
Congratulations to Tobias Geiger on putting together the perfect flight

On the 15th, I felt I'd been waiting for a day such as this, a technical day when the V3 had its chance to shine. I was able to fly at 525 kg all day, even in the gloom. The JS3 and AS33 reported that they had to dump down order to stay airborne.
High cirrus played a significant part in today's flight, but fortunately where the sun was shining through, the conditions looked far greater. That did catch me and many others out, though, causing me to go deeper into the 1st sector when I should've turned West earlier for the better conditions.

I kept moving though after a significant deviation. I had Sommer in my mind, watching him deviate once 70 to 90° for 5km to core a climb, just so that he never got stuck.
So, this is what I did. I could see the entire fleet low on flarm direct on track, thick cirrus over them and dying CU. A big deviation away from optimum saw sun with beautiful CU but rising terrain. I decided on this option. It didn't deliver the results I wanted, but 2kt climbs saw me tip toeing on. 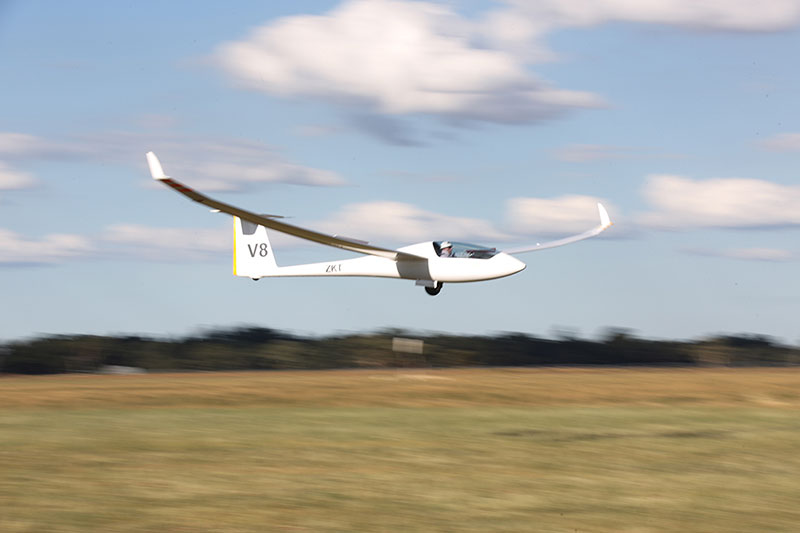 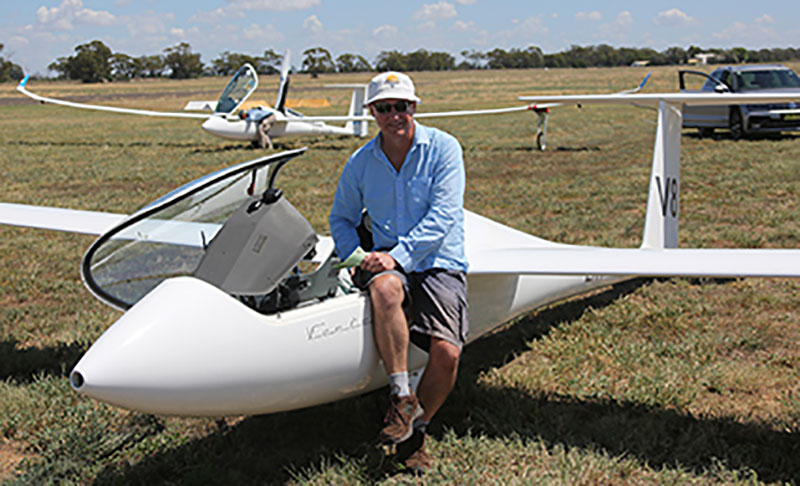 I crossed the observatory so low that I could see the whites of tourists eyes. Fortunately, at the other side, there was a climb and then plenty of fields.

Today was a huge mental game with such a phenomenonal first leg when I clearly outflew everyone, followed by survival. At every moment, I told myself, fly the best flight you can, fly the fastest flight you can, from this moment on.
So this is what I did. Connecting up with the good conditions again, 5 to 7kt climbs, running at 100kts plus again, positive and with determination. Possibly some luck was involved with the 3rd leg in the sun. Every climb was then 5kts plus to base, and we flew home for a solid 2nd for the day. An awesome V3 day when it clearly shone through.

The 16th was another cracking day when the V3 had its edge again. I kept 525kg all day and never once thought about dumping it. I managed to keep finding the climbs and kept the cruise speed up nicely - 4.2kt average, 56:1 at 104kts. Insane!
Another tactical day, I was typically leading out all day, but equally I dialed it back a few times so to maximise my chances of getting the overall decisions right. Thanks for a great flight, Matty, Buch and Barnes. 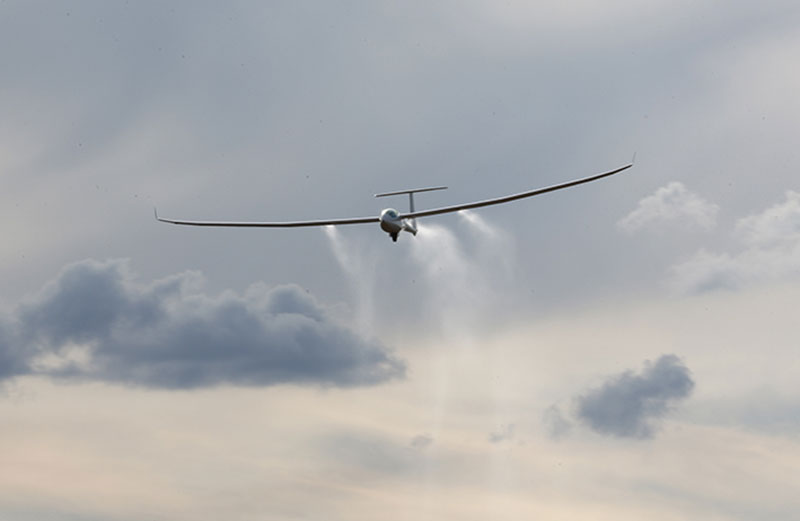 The first leg was all streeting up to a decision point, then it was left to lesser CU or a jump over a small hole to run up a storm line that might work, or might not. Fortunately Allan marked a 7kt climb to base which made the decision easier! Good fun was had, running under the black stuff.

The second leg was easy for half of it, but on the other half I was very indecisive. I played my cards safely and was rewarded in the end. The final leg was home via one big climb marked by Scutter and a 110kt final glide from base occurred. I kept it phat until the end, as there was a shower approaching the airfield. The extra height may have been needed, but in the end, fortunately not.

2nd for the day, just 5 points off 2nd now with two potential days to come. 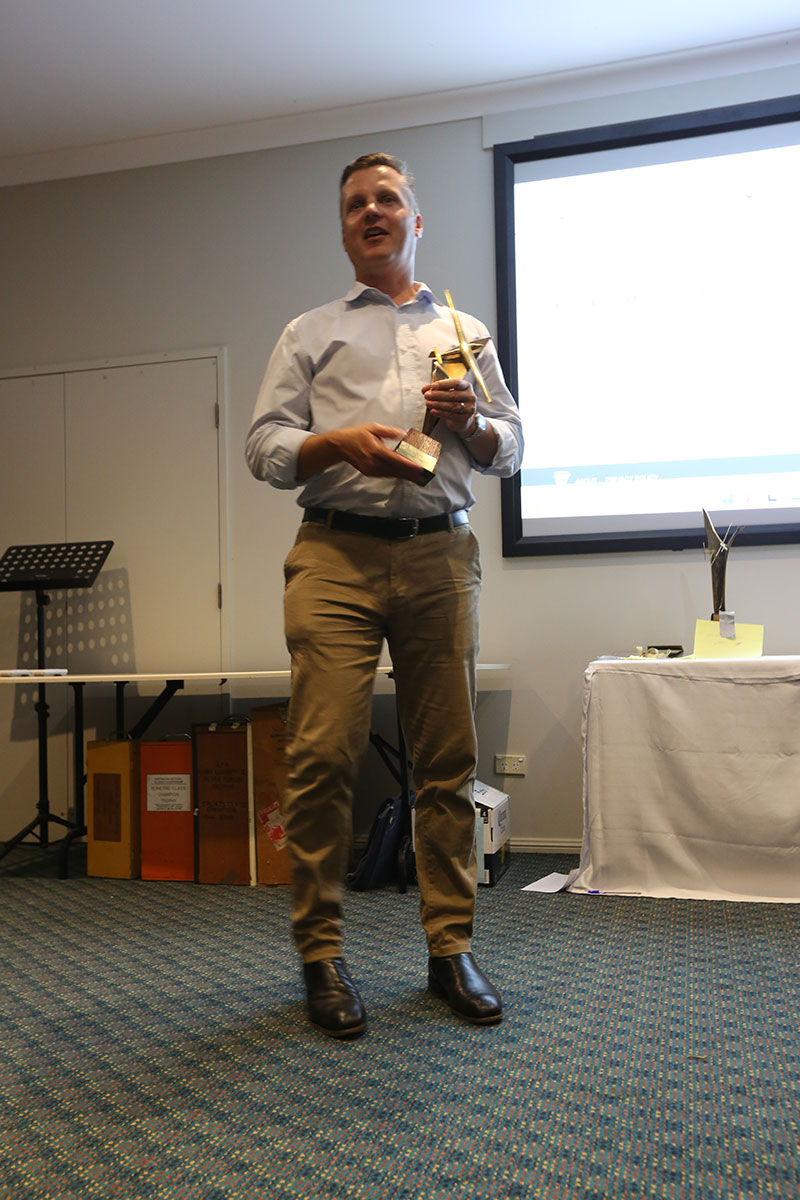 Jim Crowhurst won the class in his ASW20, one of five competing in Club Class. 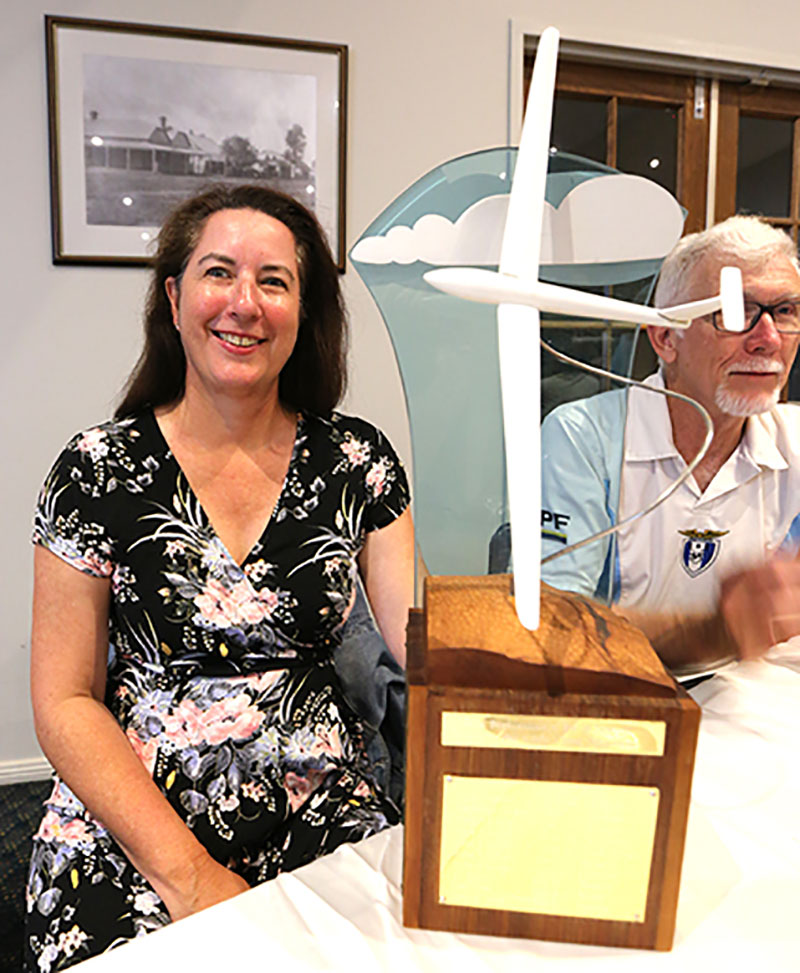 Jo Davis with the Women's Trophy for Best Performance at a Nationals. 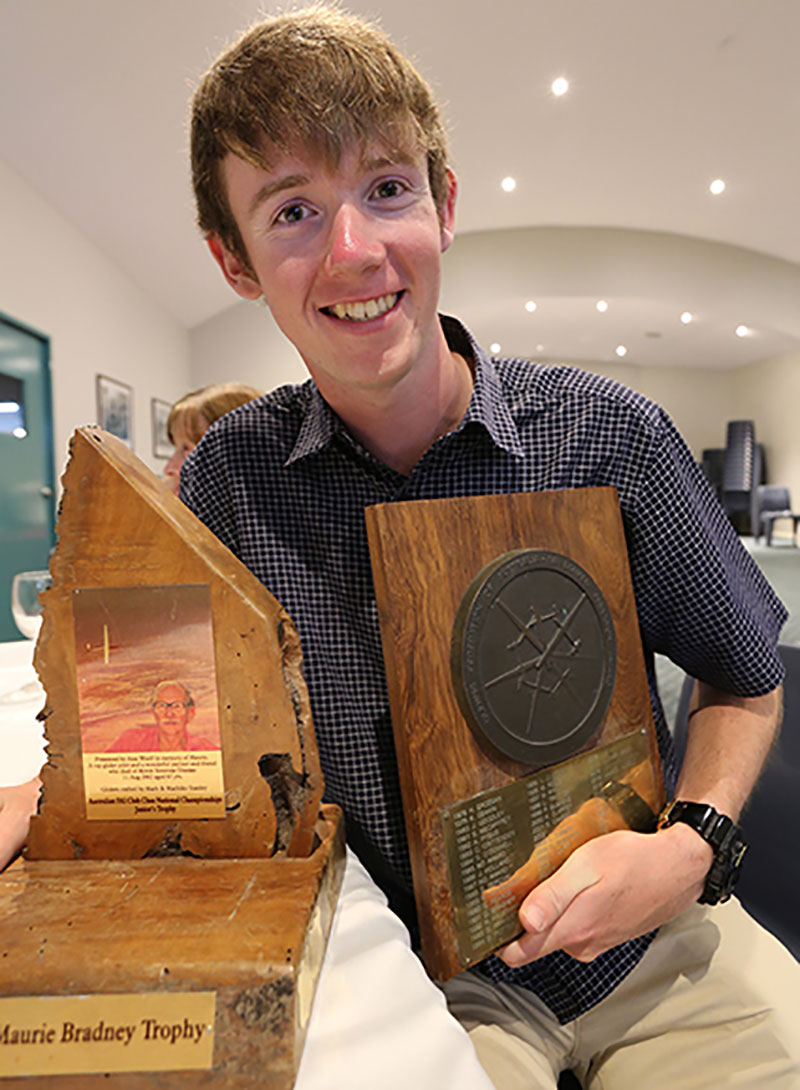 David Collins is the proud winner of both the Donald Anderson Award for Best Performance by a Novice (1st or 2nd Nationals) and the Maurie Bradney Award for Best Junior at a Club Class Nationals.