A Flight to Remember

A Flight to Remember

I thought this flight was going to be one of the first flights of a promising gliding season. I could not have known that, between having to return to France to my elderly sick mum's bedside and returning to Australia in March to a world at a standstill, this flight in late November was actually going to be one of my last of the season.

I originally wrote this article for the AWPA magazine Airnews. I wanted to give AWPA readers an idea of what it was like to fly cross-country in a glider and what my thought process was.

Thanks to the AWPA cross-country Soaring Scholarship, of which I was the proud recipient in 2019, I was able to enjoy the start of the cross country gliding season by attending the Women In Gliding (WIG) camp in Lake Keepit October 2019.

Although I did not achieve a distance badge nor any speed record on that particular day – far from it! – this was a very interesting flight. It is a good illustration of the glider pilot’s decision making process and what a cross country flight in a glider might actually look and feel like.
As every day, we lined up on the runway waiting for our turn for an aerotow launch, Kerrie Claffey leading the pack in T1.

As you can see from the picture below, I had first planned to head east toward Manilla (turn point to the east). However, the active fires in that area were still creating a lot of smoke to the east, reducing visibility and lift, so I decided head northwest instead towards my second turn point Narrabri (turn point to the northwest). 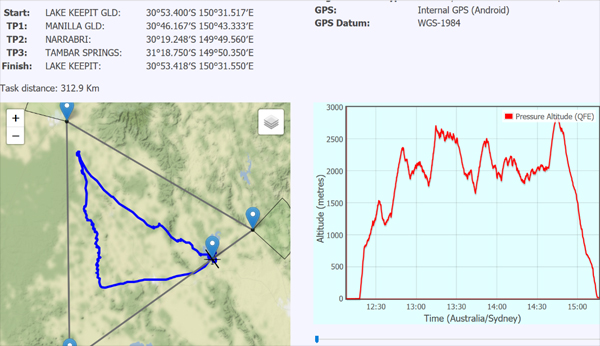 I had originally planned a 312km task which, given the day’s forecast, was achievable. But, as always when gliding, and when flying in general, conditions have to be constantly re-assessed and plans possibly changed, and this particular flight was no exception.

The picture  below, shows that for the first third of the first leg to the northwest I took quite a few thermals to try to get higher and higher but, for the last two-thirds of that leg, the trace shows a straight path without any thermalling. However, the corresponding altitude graph shows I stayed at around 3,000m, or 10,000ft. The reason for that was probably that I encountered a kind of convergence that gave me significant constant lift for 50km or so, possibly created by the storm to the right of my track. 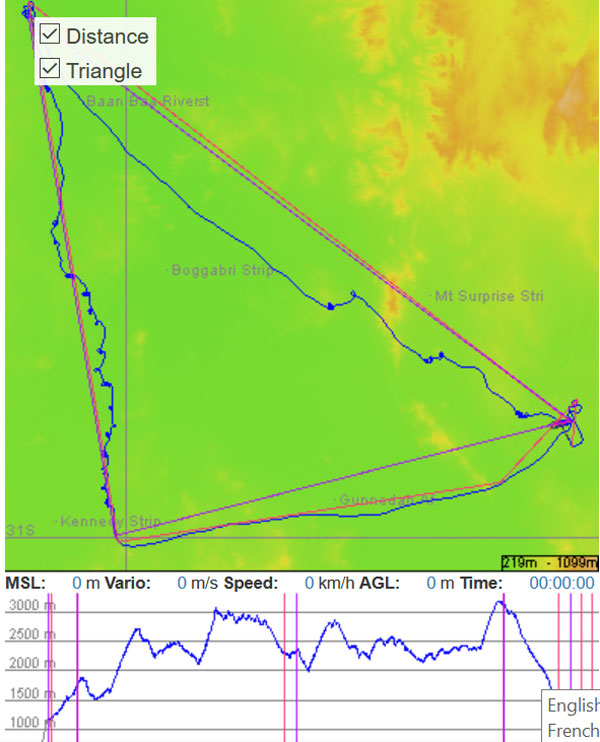 As I was reaching Narrabri, I could see that the clouds from the storm were heading west and I was afraid that, by the time I reached Narrabri and turned back, the clouds would have moved across my path, creating shadowy areas and destroying lift in the process. Therefore, I decided to turn away before reaching Narrabri toward my next turn point Tambar Springs, the southern-most point of my task.

A quarter into my second leg towards Tambar Springs, the conditions changed. The air mass was different compared to when I was closer to the storm and I had to take a lot of thermals, fighting hard to stay above 6,500ft, fighting to do so more by instinct than by any weather knowledge.

After trying many disappointing thermals with 1 to 2.5 knots of lift and losing a lot of time in the process, I finally encountered a 6 knotter that took me to 10,500ft.

I knew spending so much time in weak thermals was against all my cross-country coaches had tried to teach me, however, I had this urge to try to stay high no matter what. Perhaps it was me being overprotective of my recently acquired Discus b JE.

Anyway, since I was now so high, I was well and truly on track to reach the Tambar Springs turning point and was about to head straight there. It was then that I heard Kerrie Claffey making an outlanding call, and she landed in a paddock. Kerrie was on the 2020 Gliding Woman World Championship Australian team, and an outlanding call from such an experienced glider pilot was definitely not good news.

Minutes later, Kimberley Olsen was also calling on the radio announcing that she too was struggling and might have to land out, doing so 10 or 15 minutes later. I then took the decision to abandon my next turn point and go straight home. There was no point pressing on just to clock up more kilometres and finding myself also on the ground in a paddock on my way back. You can see from the trace in the picture to the left that I had final glide at that point, meaning that I did not need to thermal at all to get back to Lake Keepit.

By the time I got back, Jennefer Goldsmith and Ada Lim had also outlanded, as well as a couple of the guys that had taken a launch as well that day. All of these out landings were in the general Gunnedah area. It turned out that the storm I had instinctively moved away from was sucking the air down all the way to the Gunnedah area, a long way south from its location.

I flew straight over this particular area on my way back to Lake Keepit, but I think my saving grace had been to catch that last thermal to 10,000ft, keeping me well above the altitude where the storm was sucking the air down. Deciding to turn home at this stage had been wise. I was in time to secure my glider, gather a team, grab Ada’s glider trailer and car and go to retrieve her.Thank you, Ada, for the yummy Thai dinner after the retrieve!

This shows how storms can have a strong impact far away from their location, sucking all the air down and all the gliders around with it. This is another reason to have the utmost respect for our strong Australian weather conditions!

I hope you enjoyed the article. Bear in mind that I am still a beginner learning about cross country flying with so much more to learn and that this flight could have been managed much better with much better speed and distance outcomes.

I would like to thank Wendy Medlicott for organising the WIG camp in 2019, GFA NSW for supporting NSW participants, the Lake Keepit Soaring Club, their members and staff for their warm welcome, and Grant Nelson of Keepit Glider Tech and Nigel Holmes for their help with JE. Thanks to all the girls and partners participating in the camp for their friendship, support, experienced help and tips – and for all the laughs. In particular, thank you, Harry Medlicott for the talks and advice – I did try to apply the tips – and Kerrie Claffey for sharing her wealth of experience with the girls.

AWPA offers a number of scholarships and awards to learn how to fly and to improve flying skills for female fixed wing power pilots and helicopter, as well as glider pilots at any age and experience level. Please check the website
awpa.org.au/scholarships-and-awards

One of the gliding specific scholarship is the Soaring Scholarship, a $500 scholarship to assist a female glider pilot to enhance her cross-country skills. Scholarship funds can be used for but are not limited to assisting a sailplane pilot with towing charges, glider hire or retrieval costs. Applicants must be a permanent resident of Australia; hold a silver C badge and a current GFA membership and medical credentials.
Another one is the Gliding Award (Perpetual Trophy and memento Albatross). This award is made for the most meritorious gliding flight carried out by a female glider pilot during the previous year, or for an outstanding contribution to the advancement of gliding in Australia. Membership of AWPA is not a requirement. The 2020 award went to Jo Davis who was leading the 2020 Women's World Gliding Championship till the last day, finishing in 4th overall. This was the best performance by an Australian woman ever at a Women's World Gliding Championship. Congratulations, Jo.

Please have a look at all the AWPA scholarships and apply for a scholarship or nominate someone for the Gliding Award. We are working hard at the AWPA to raise funds to offer these scholarship and love to help ladies improve their flying skills and to recognise lady pilots’ achievements so please apply and nominate. 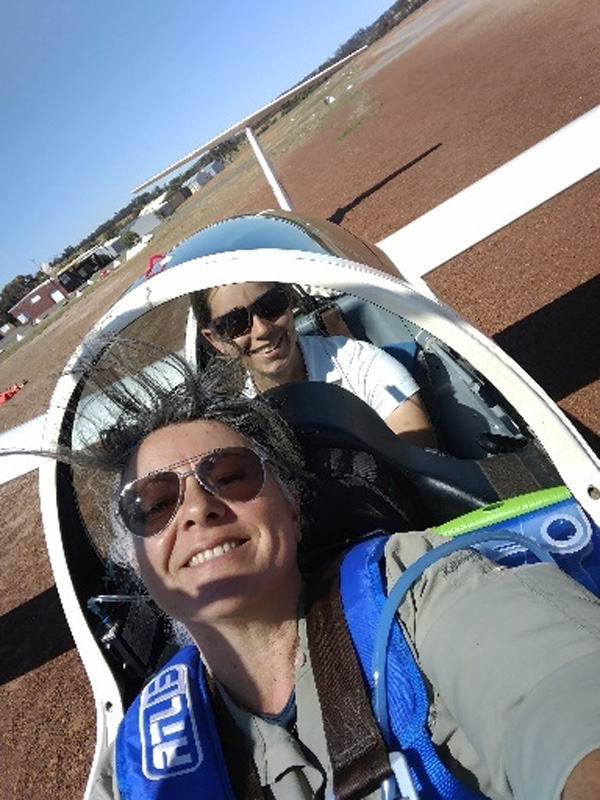