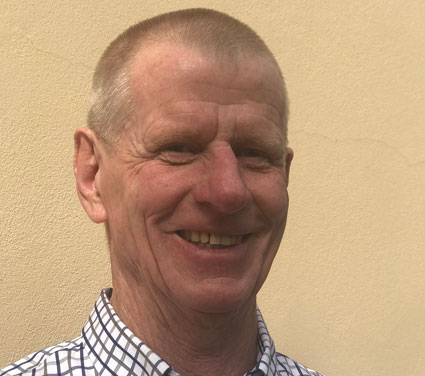 Reflection
It’s a relief to see that we’re all getting back to life that is more reflective of times pre-COVID. The Australian population is almost fully vaccinated, and it seems that much of the hysteria, and what some may argue has been an over-reaching political response, has subdued to the point where we can all get back to former pursuits in a manner that is close to normality. COVID is still about and of course we still need to be careful, but it is fantastic to see that most clubs have recovered with good activity levels over the last year. The weather of course is another matter – if only it would stop raining along the eastern seaboard.

In May this year the Board had its first face-to-face meeting in over two years. Although we’ve worked together well and productively via video conferencing it is so much easier when everyone is in the same room. Moving forward we plan to implement a combination of face-to-face and video conference meetings as we believe a mix will provide the most productive outcome at reasonable cost.

Marketing and development
A couple of years ago the Board took the decision, as part of modernising its marketing and promotion of the sport, to rebrand The Gliding Federation of Australia or GFA to Gliding Australia. As part of the process all regions were consulted and have universally accepted the idea and have rebranded themselves in a similar way, eg, Gliding Queensland.

Our Marketing and Development team is headed by Sarah Thompson, and she leads a group that is passionate about the continued development and promotion of our sport which is essential to ensuring its long-term viability. For some time, Gliding Australia has engaged Amanda VanderWal from VanderWal Sports Consultancy to be part of Sarah’s team. Amanda is a consummate professional specialising in club development. She can and is keen to assist all clubs in a wide range of areas such as, promotion, fundraising, assistance with grant applications, constitutional reform, governance, conflict resolution and just about anything that affects the ongoing development of a club. Amanda has been able to assist many clubs in identifying and achieving their development needs, but there are many that have not take advantage of her wealth of experience and knowledge. Amanda’s services are offered free to clubs and Regional Associations, so why not give her a call
(Amanda’s contact details are on the Gliding Australia website) – she will be very pleased to hear from you.

Integrated Training Program
At the last AGM I reported on the development of the Integrated Training Program (ITP) which has been a long-term collaborative effort by the Soaring Development and Operations Departments. We have always done a great job of training pilots to be safe and competent in the circuit area, but there were real gaps with providing formal training support beyond that point and as a result we have been losing members. The ITP has addressed that training gap and, we believe, will greatly assist with member retention.

The ITP is now complete and is in the roll-out stage across all clubs. There won’t be anything new that instructors will teach, but there will be a clearer structure and pathway for both instructors and students with much more and better training support tools that are readily accessible. Not only will we have an improved training package, but the task for instructors will be better defined and supported – in short it will help to make the instructor’s job easier and more satisfying. The clubs that have been trialling the new program are extremely enthusiastic in singing its praises – both students and instructors love it.

Part 149
Last year I reported that the Board had determined that our future would be best served by becoming a Part 149 Approved Self-Administering Aviation Organisation (ASAO). Part 149 is legislation that was enacted in 2018 and it lays out the rules around how aviation sporting organisations, like Gliding Australia, can become self-administering. Currently we rely on exemptions to the CARs and CASRs to carry out our gliding specific functions, and if we don’t become a Part 149 ASAO, in the future we will have to pay CASA for the time it spends processing our exemptions, which will be ongoing and prohibitively expensive. The big advantage for ASAOs is that they will have greater autonomy over their whole of business operations, but with these enhanced freedoms comes added responsibilities. We will need to establish effective self-auditing and change management processes that identify risk and safety as core elements, and of course, as happens now, we will be audited by the regulator (CASA) to ensure our compliance. The requirements around this are quite complex and are specified in the Part 149 Manual of Standards.

The overarching document that will support our application is called an Exposition. It was originally due for submission to CASA last December but as often happens the timeline was unrealistic, and it has now been extended to December 2022. It is vital that we meet this deadline to ensure CASA’s consideration of our Exposition is done on a no-cost basis. Submissions after that date will require CASA to charge for time spent at an hourly rate which is currently $160 per hour. This is not CASA being difficult or greedy, it is legislation enacted by the Australian Parliament. Under the current rules the implementation of the changes to become a Part 149 ASAO must be made by December 2023.

The past 12 months has seen an enormous effort put towards things Part 149. The raft of documents that will support our Exposition are quite mature and close to completion – we will make the date! Although there are many people involved in this process, I would like to acknowledge Anthony Smith as the lead of our Part 149 Sub-Committee and Drew McKinnie who is playing a pivotal role in the overarching area of safety.

As I pointed out last year, it is not expected that members will see any real, direct impact as a result of adopting Part 149. The changes are more related to management of our activities and how accountability is attributed – the adoption of Part 149 will result in a better, stronger organisation. Part 149 will mean change; it is a challenging process and I strongly believe that provided we develop our Exposition such that it serves the best interests of Gliding Australia, it will go a long way to ensure our future sustainability.

Constitutional Reform
Our move to Part 149 will require some significant changes to Gliding Australia’s management structure, which in turn will necessitate a revision of the Articles of Association. The Board has also been considering other changes to the Articles that will modernise and improve our structure to help streamline our decision making and clearly delineate areas of responsibility. We’ve also conducted a gap analysis of our compliance with the 2012 Victorian Reform Act and found some minor discrepancies that should be rectified.

The Board is quite purposefully not advocating a complete rewrite of the Articles of Association as we thought it important to specifically address changes required to support matters associated with Part 149, compliance with legislation and other important management structural change that will enable Gliding Australia to operate more efficiently.

The work on this project has been progressively undertaken by the Board over the past 18 months and has resulted in a proposed updated Constitution. Of course, the Gliding Australia Membership will need to approve the changes before any alterations to our association’s rules can be implemented. The plan is to hold an Extraordinary General Meeting (EGM) in early November where Members will be asked to approve the proposed changes. The Board will soon distribute the proposed Constitution along with some background information as to why the changes are being promoted, plus a summary of changes and some questions and answers that will assist Members’ understanding. As part of the consultation process there will be plenty of opportunity, prior to the EGM, where members will be able to ask questions and seek clarification. Our plan is to conduct a series of webinars and perhaps some face-to-face meetings where the changes will be presented and where Members will be able to ask questions.

Closing Comment
This past year has been a very busy and productive one for your Board. Apart from normal business, much of its time and effort has been invested into preparation for the submission of our Part 149 Exposition and the proposed reforms to the Articles of Association. I must say I have been very fortunate to work with such a diverse group of very talented people. This AGM will see the retirement of our long serving Board members, Viv Drew, Greg Beecroft and Beryl Hartley and I for one will miss their wise and insightful inputs to the Board’s deliberations. I would also like to acknowledge our paid employees and contractors who do put in above and beyond. They are passionate about what they do, and we are a richer organisation for that.
Fly safe and be kind to each other.