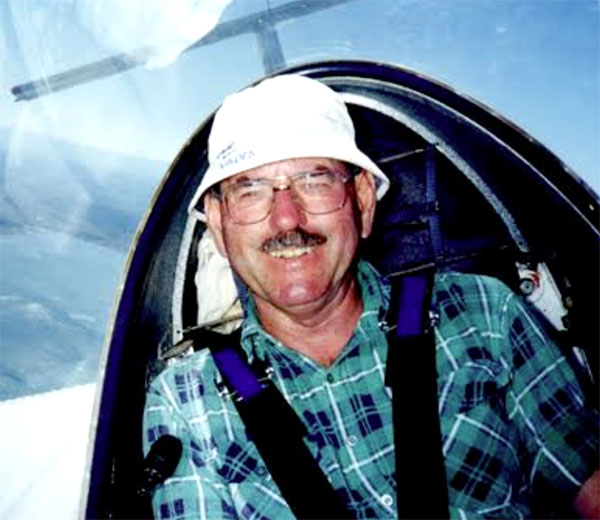 When Garry Speight died on 2 December 2021, aged 87, Australian gliding lost one of its most experienced, insightful and generous pilots. He was a friend and mentor to many and applied the same scientific rigour to gliding as he had to geomorphology at the CSIRO. His first flight was at age 2 years and 9 months with his parents in a Gypsy Moth from Blenheim on the South Island of New Zealand to various destinations on the North Island. Between the ages of five and ten, he lived at RNZAF Woodbourne, as he said, “within sight and ear-shot of aeroplanes every day: the die was cast.”

Under a scholarship scheme, he soloed in a Tiger Moth in September 1951 and continued flying part time with the RNZAF in Harvards, concluding with six hours in dual Vampires and amassing a total of 368 hours.

In 1961 he took a research job with CSIRO in Canberra and began gliding with the nascent Canberra Gliding Club, soon becoming an instructor and competing, like most of us, at weekends and holidays. His enthusiasm and commitment were such that neither his scientific career nor family commitments kept him away. Made redundant by the CSIRO in 1989, he began full time instructing on a subsistence income, flying about 200 hours each year.

In about 1990, he joined Ian McPhee to help run the mid-week operation at the Lake Keepit Soaring Club, where he remained until he stopped flying. He taught ab initio pilots, ran cross country courses, gave theory lectures and flew the tug. He also initiated a computer based flight recording system, later improved by Dave Shorter, another 2021 loss. He spent a short time in Japan and wore his hachimaki when flying tugs, a symbol of effort or courage for the military – or simply to keep the sweat out of one’s eyes. When he stopped actively flying, he was an enthusiastic instructor in Keepit’s simulator.

He was a very engaging conversationalist on many erudite and arcane topics and delighted Keepit gatherings with dramatic recitations. If he thought you were wrong on some matter, he would gently say “I see” in a particular way that made it plain he did not! He would then follow up with a succinct statement that would put a finger on the flaw in an argument.

When he decided to build a house in Manilla, he applied his interest in climate and weather to the design of the house. It would be an energy efficient passive solar house and Garry went about its design with the rigour that he applied to gliding. He read the literature, consulted academic experts and did the calculations. Unlike some houses that intend to be and claim to be energy efficient, Garry instrumented the house and kept at least ten years of meticulous records of the house’s performance which demonstrated its success. It needed no heating or cooling, and any visitor would feel its effect. His deep interest in climate and weather is recorded on his website at www.climatebysurly.com.

In 2015, the Keepit Club supported the collection of Garry’s articles written over 50 years. He described his writing as “technical and academic, rather than creative; I write as I did as a scientist. If you find some of my articles hard going, please don’t give up.” The topics are diverse, always treated thoroughly and are often very erudite. Most of the early papers are still relevant and very useful to both beginning and experienced pilots. They are available on the Keepit website www.keepitsoaring.com – go to Information, Documents, The Speight Papers. The Club made him a Life Member in 2009 for his outstanding and enduring services to the Club.

The numbers only tell part of the story. Anyone who has flown with him (probably in the Twin Astir IKX) or been coached or coaxed on a lead and follow, will have experienced his consummate skill in seeking the best from the sky, extracting lift from a mere wisp of air and offering discreet encouragement from the back seat.

Garry was a gentleman who will be missed by all who were lucky to have their lives enriched by his company.