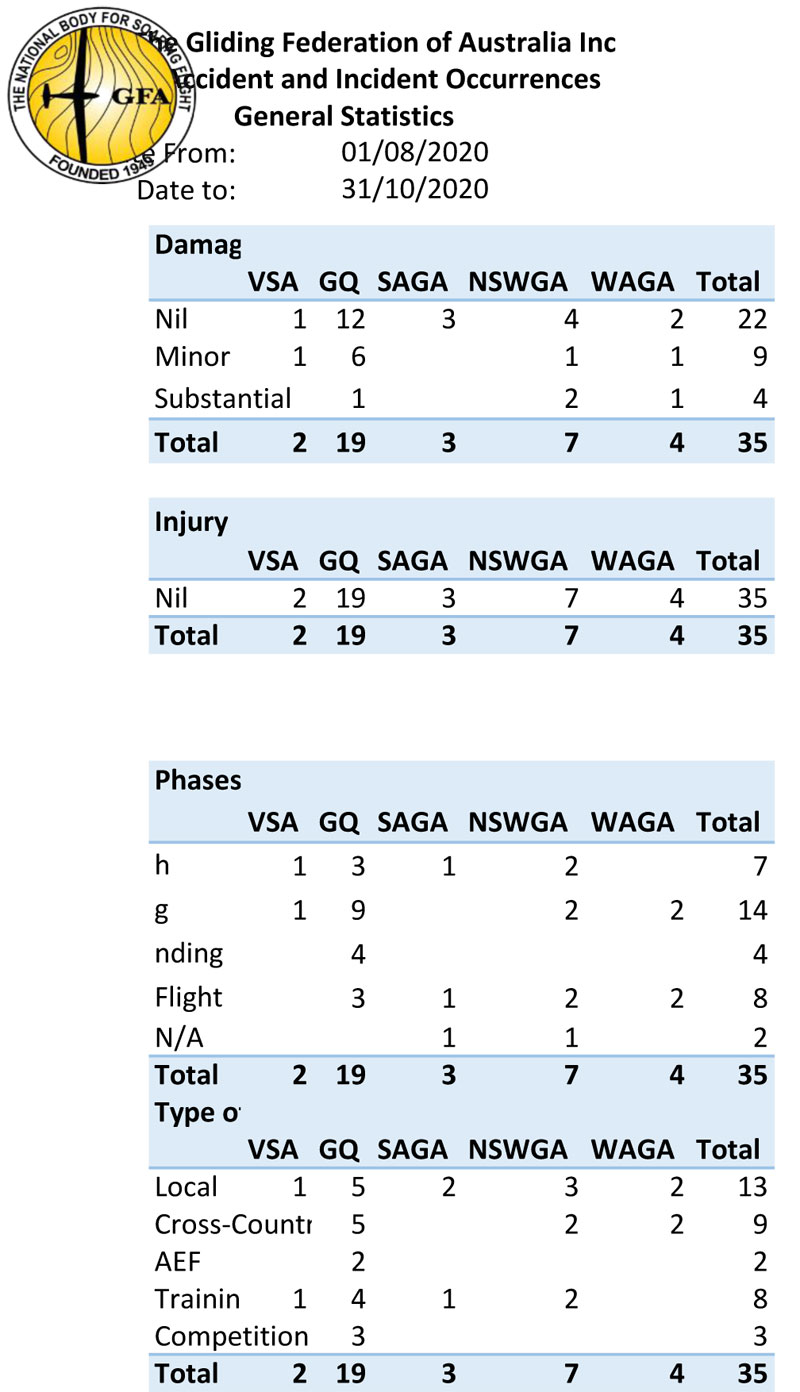 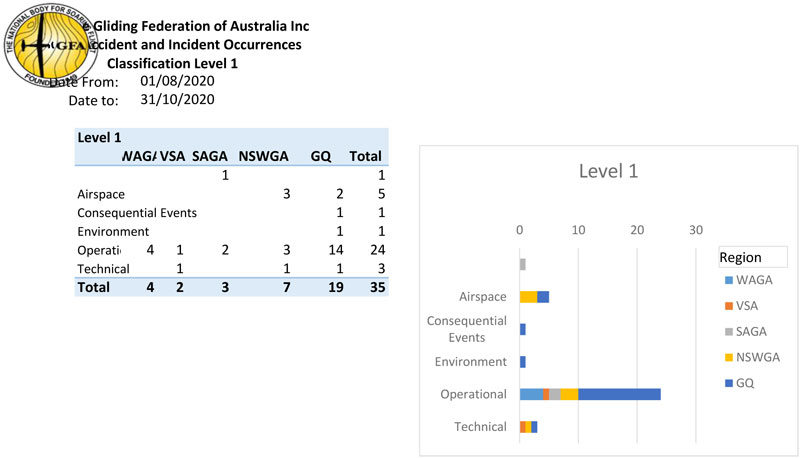 16-Aug-2020 GQ
Twin Astir
Flight controls
What Happened
During an Air Experience Flight, the Instructor noticed the rear control stick was progressively developing a loose feeling as though it was not properly connected to the control surfaces. The Instructor abandoned the flight and made a safe landing back on the aerodrome.
Analysis
The rear control column in the Twin Astir is detachable and held in place by a retaining nut. Inspection revealed the retaining nut had come loose. The glider had been returned to service two days previously having had an extensive refurbishment and Form 2 carried out at an approved maintenance facility. 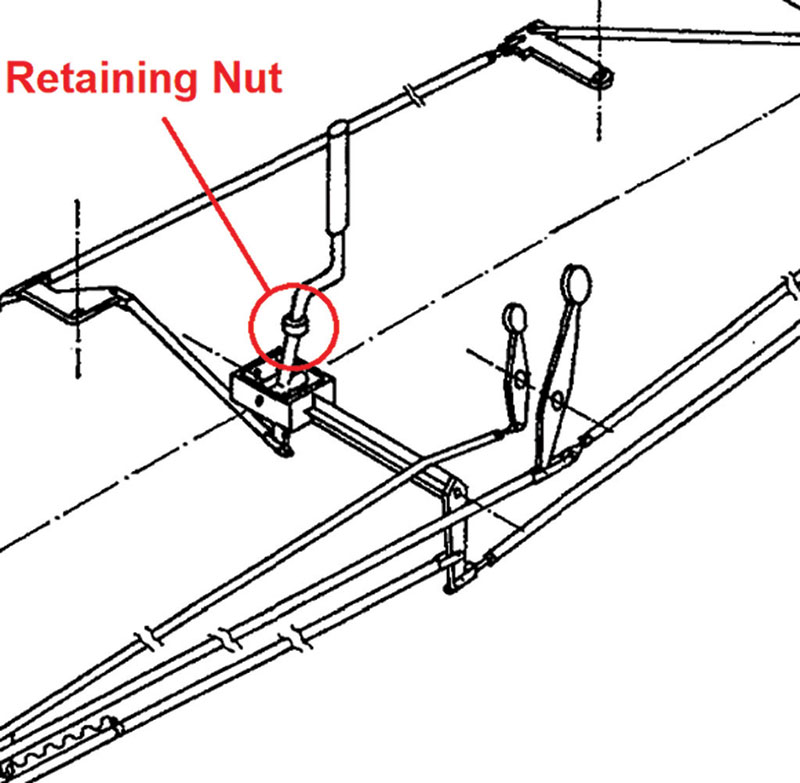 4-Sep-2020 GQ
Near collision
DG-1000S - Piper PA-25
What Happened
While on the downwind leg and Just prior to turning onto the base leg, the instructor in a DG1000 sailplane observed a Pawnee tow plane in a 45 degree right-hand bank and steep descent, approaching head on slightly below. The tow plane passed rapidly under the left-wing mid span. Vertical separation was estimated at less than 100ft when first sighted. 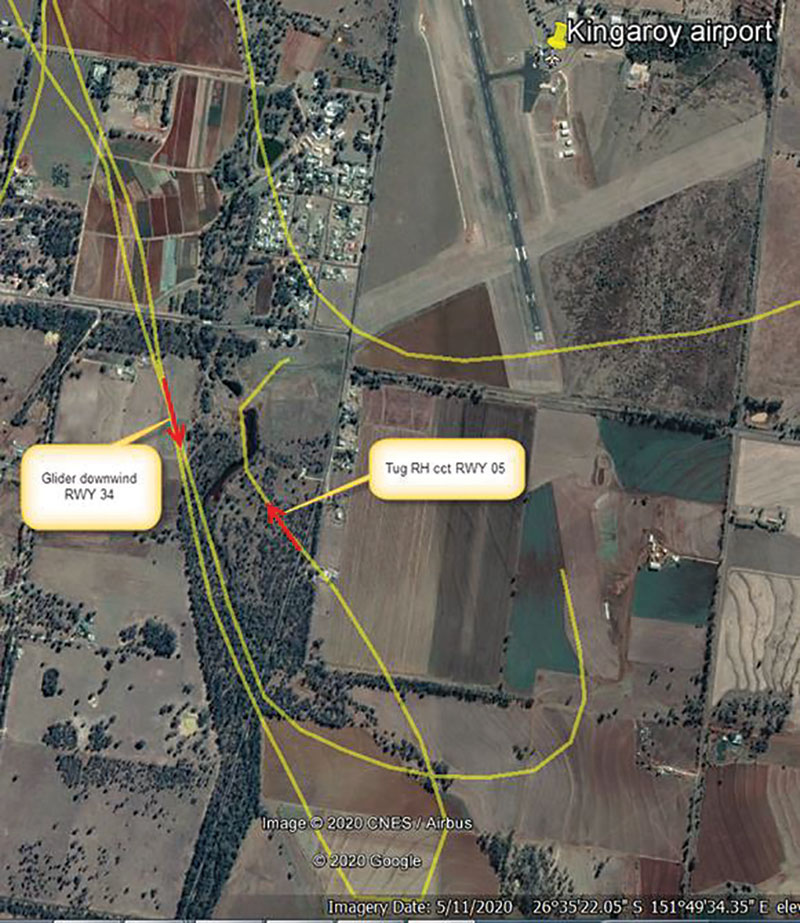 Analysis
Both aircraft carried data loggers and the data files were analysed. The flight traces disclosed the tow pilot joined a long descending non-standard right base for runway 05 immediately after the glider being towed released at 2000ft AGL south of the field. The DG-1000 sailplane was mid-downwind on a standard left-hand circuit for the operational runway 34. This placed the tow plane and sailplane on reciprocal headings with high closing speeds. As the sailplane passed abeam the landing area the tug descended below and between the airplane and runway with approximately 200m horizontal separation in a right-hand turn onto final for runway 05.
Findings
The tow pilot was unaware of this conflict, which was not brought to his attention until the incident was reported some 28 days after the incident. Therefore, his recollection of the actual sequence of events was not clear. The tow pilot could not recall if there was a particular reason for making a non-standard right-hand circuit onto runway 05 at the time and stated that his normal recovery preferences were to conform to the runway in use by the gliders; or to use the cross strip in the normal circuit direction where the wind favoured this runway. The tow pilot could not recall hearing a downwind call from the glider, nor did he recall seeing the sailplane in close proximity during the base to final turn; although he stated that his focus at that time would have been on his landing area. Both aircraft were fitted with flarm, but neither pilot can recall a collision alert at the time of the incident.
Causal Factors
l The tow pilot conducted a non-standard circuit onto the cross strip causing a conflict with traffic on downwind for the operational runway.
l The launch prior to the incident was number 3 for a total of 27 launches all conducted by the same tow pilot, there may have been some perceived pressure on the tow pilot to expedite the recovery for the next launch
l The gliding instructor was distracted by managing the student radio calls and monitoring the student’s handling of the glider in the circuit. This may have contributed to missing the tow pilot’s circuit call and reducing the time spent visually scanning for other traffic.
Corrective action
The CFI and deputy CFI discussed with the tow pilot the importance of being predictable in the circuit and to use standard approaches unless there is an operational safety requirement to do otherwise, regardless of the workload pressures presented on the day. To reduce the workload on the tow pilot the Club has added to the morning briefing an assessment of the expected workload and where necessary a second tow pilot/tow plane is to be requested. Where a second pilot/tow plane is not available, delays in launching are to be expected.
Safety Advice
By itself, the concept of ‘see-and-avoid’ is far from reliable. It is important that pilots apply the principles of ‘see-and-avoid’ in conjunction with an active listening watch, and that pilots act predictably in the circuit. The following publications provide some useful information on the see-and-avoid principles and guidnace for pilots operating in the vicinity of non-controlled aerodromes:
l Limitations of the see-and-avoid principle (1991), available from the ATSB’s website at:
l Safety in the vicinity of non-towered aerodromes (2010) AR-2008-044(2), available from the ATSB website.
l Operations in the vicinity of non-towered aerodromes (Civil Aviation Advisory Publication CAAP 166-1) available from the Civil Aviation Safety Authority website.
l Pilots responsibility for collision avoidance in the vicinity of non-towered (non-controlled) aerodromes using the ‘see-and-avoid’ (Civil Aviation Advisory Publication CAAP 166-2), available from the Civil Aviation Safety Authority website.

7-Oct-2020 GQ
Terrain Collisions
Discus B
What Happened
While outlanding in a paddock near a farmhouse and at a height of about 30 ft, the starboard wing of the glider struck a power line that was strung between two poles over the fence-line of the paddock. The aircraft yawed to the right and descended quickly, touching down while skidding sideways. The aircraft came to rest facing approximately 70 degrees to the right of its original track. The pilot was uninjured, but the aircraft suffered damage to the leading edge of the right wing. 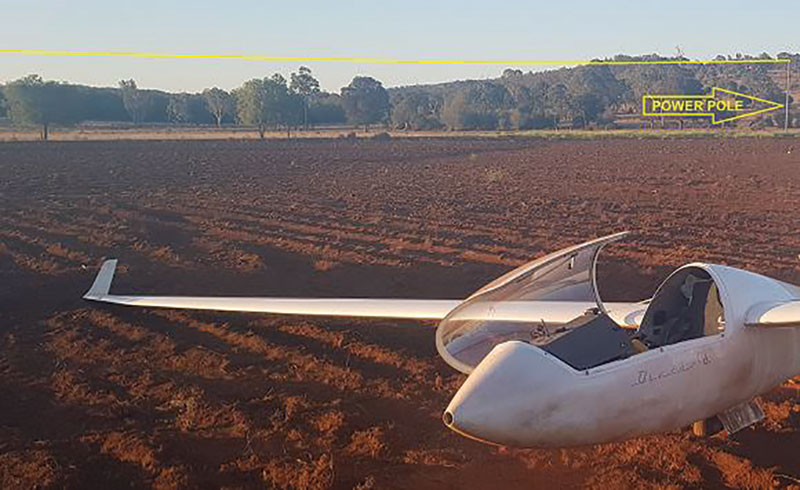 Analysis
The pilot was competing in a Grand Prix event organised by the local club. On the final leg of the task and about 45kms from home, the pilot found himself below final glide and struggling to find lift. The pilot flew into an area of landable terrain with which he was familiar and arrived at about 1300ft AGL. The pilot identified a suitable outlanding paddock running north-south next to a farmhouse, and then used the available height to search for lift while remaining within reach of the identified paddock. The pilot spent the next 5 minutes maintaining or slowly losing height in weak lift to the West (downwind) of the paddock before breaking-off the flight for landing. The pilot descended upwind of the paddock and joined circuit on a left-hand base leg at about 500ft AGL (refer graphic 1).  The pilot joined final at about 400ft AGL and set an aiming point about one-third the way into the paddock, where the plough furrows were better aligned for landing.
As the glider crossed the boundary fence, and at a height of about 30ft AGL, the pilot noticed a wire pass over the canopy. The starboard wing then struck the wire, identified as a ‘Single Wire Earth Return’ powerline, that was strung between two poles about 40 metres inside and parallel to the paddock fence line (refer graphic 2 and photograph 1). Witness marks identify the wire struck the starboard wing about mid-span and slid down the leading edge until it cleared the wingtip. The impact caused the glider to yaw severely to the right and skid partially sideways onto the ground. Upon touchdown, the aircraft skidded sideways in the paddock and came to rest approximately 70 degrees to the right of its flight path. The pilot reported: “As to why it (the powerline) caught one wing, I can't say with certainty. I was toward the left-hand side of the paddock, as I'd assessed that had a better landing surface; the paddock was ploughed in a race-track pattern and that side seemed to have smoother furrows in the correct direction, which would mean that the bow of the wire would be higher to my left and lower to my right. But I may have had some small angle of bank on making a last second correction.” The glider was subsequently inspected for structural damage at an Approved Maintenance Organization and found to have only minor abrasions to the starboard wing leading edge and a cracked winglet.
Causal Factors
l The pilot did not identify the single wire crossing the paddock during the initial overflight or during the final approach.
l The single power cable was difficult to see and the supporting posts were obscured by trees or blended with the background.
l The pilot did not conduct a downwind leg that may have provided an opportunity to identify the posts and wire.
l The pilot’s workload while landing in an unfamiliar place was high and likely increased stress levels.
Safety Advice
Wire strikes are associated with low-level flight, and usually occur to gliders during landing. Operating in the low-level environment is inherently dangerous as there are a greater number of obstacles to avoid, there is significantly less time to regain control of an emergency situation, and there is a higher workload as pilots must negotiate the hazardous environment in addition to their normal workload.  In some cases the consequences of a wire-strike will be minor, as in the case of this accident. In less forgiving circumstances the wire may snare the aircraft, resulting in an accident that could cause the destruction of the aircraft and possible injury or death of the occupants. It is therefore vital that pilots who are operating into an unfamiliar landing area should remain vigilant and ensure that all the necessary precautions, such as flying a proper circuit while maintaining a good lookout for obstacles, are taken to reduce the risks associated with operating within the low level environment. However, despite reconnaissance of the proposed landing area and a constant lookout during flight, wires are often difficult to detect. The likelihood of a pilot seeing wires is determined by a number of factors including the number of wires, type of support structure, length of wire span, the environment and the background against which the pilot is viewing the wires. Remember also that SWER lines do not necessarily follow fence lines. They may cut the corners off paddocks, stretch across at some intermediate distance into the paddock or wander off completely at random. The best guidance is that, if you can see a homestead, assume that there will be a SWER line leading to it. You MUST find it before you attempt a landing. To identify powerline locations, visit the lookupandlive.com.au website. This site provides an interactive geospatial map that has been developed to display the Energex, Ergon Energy, Endeavour Energy, Essential Energy and Powerlink electricity networks, including sourced third-party information.