In Issue 54 of the Gliding Australia magazine, I wrote of an incident in which an aircraft was cleared for flight after a hard landing despite suffering substantial structural damage. The damage resulted the flight crew experiencing aileron control difficulties during the subsequent aerotow launch. 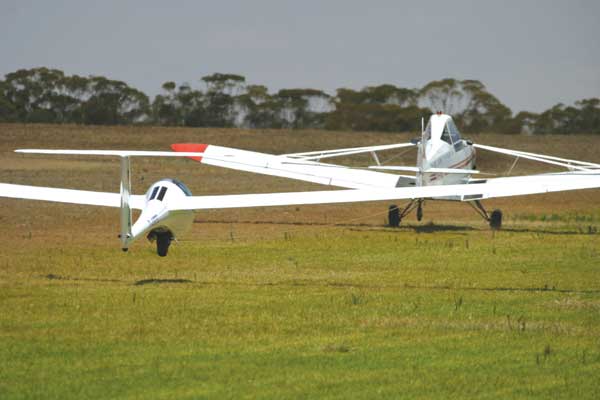 Incidents involving sailplanes that have been flown with undetected damage following a hard landing are not uncommon. The Airworthiness Department frequently receives reports from Inspectors who have discovered undetected hard landing damage while conducting an annual inspection.

A hard landing occurs when a sailplane hits the ground with a greater vertical speed and force than in a normal landing. However, the forces involved may not always be apparent, so for most pilots, if they have to question whether that previous landing was ‘hard’, it probably was! Any landing where tyres or wheels are deflated or damaged should raise this question.

Sailplanes are designed to withstand flight and landing loads within specified limits. If design limits are exceeded, the structural integrity of the sailplane structure may be jeopardised and safety could be impaired. Any report or evidence on the sailplane that suggests that the design limits have been exceeded or equipment damaged should, therefore, be followed by a careful inspection appropriate to the nature of the occurrence and in accordance with the sailplane manufacturer’s approved data.

The following advice is provided as guidance for special inspection requirements to certificate of registration holders, pilots and individuals involved in the maintenance of sailplanes. It is not possible to provide precise details of inspections to be adopted after every type of incident due to glider design differences and the varying nature of the stresses that may occur.

The inspection process must be to such a scope as to ensure that all defects, including sub-surface defects, or limitations in control functionality are detected. By virtue of their design, sailplanes differ in the manner in which an abnormal load may manifest itself. Wrinkling or distortion of fuselage or wing skins may well be an indication that structure deformation or failure has occurred, and a full investigation should be carried out. Any jamming, binding or limited travel of controls must be fully investigated. A wing frequency check should also be conducted in accordance with paragraph 3.3.4.1 of GFA publication Basic Sailplane Engineering (AIRW-M005).

If a sailplane has been flown through conditions of severe turbulence, or has been subjected to flight manoeuvres in excess of the manufacturer’s recommended limits, or has suffered a hard or overweight – for example, with water ballast – landing, including a ground-loop, the sailplane must be taken out of service and assessed for damage. The inspector must understand the loads that the sailplane is likely to have been subjected to, so that the inspection can cover the likely damage points. A person holding an Annual Inspector or higher authority is authorised to perform the inspection and release the sailplane to service.

The inspections and actions recommended prior to further flight are detailed in Chapter 25 of the GFA publication ‘Basic Sailplane Engineering’.