When you’ve been involved in an activity like gliding for a long time, certain incidents seem to form a pattern – they happen over and over. Wheels-up landings are frequent, stall-and-spin accident less so. Each individual incident by itself is, however devastating and uniquely terrible for those involved, not hugely informative over the previous one. 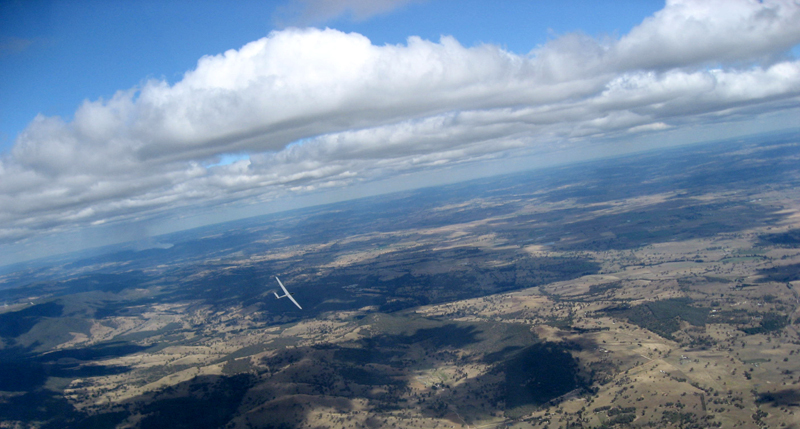 But then, occasionally, an event happens that somehow challenges assumptions that previously held true. Let’s take midair collisions, for example. We know that they happen in gaggles and in competitions, and that risk exists in certain places that they might happen between you and something really big (like a cargo Boeing 777 bound for Hong Kong climbing out of CTAF at Wellcamp Airport west of Toowoomba in Queensland).

But to be in a glider and fly into your own tug, or be flown into by your own tug, about half a minute after releasing – that one might be new to some of us. It’s like a blue on blue incident, where the two parties involved in an operation end up shooting each other.

It happened in Alberta, Canada last year, during the northern summer. Such events have much to say about us, too – about the kind of tug you use and what you see and don’t see from it, about FLARM and about what you do when on tow. Such an incident reveals whether or not you release in a particular situation – say, when a strong thermal gives both the glider and the tug a kick up, and the tuggie may not feel you release at all, and whether and when you say anything on the radio after releasing, like ‘rope clear’ or ‘thanks' and where you write up aircraft defects.

The Transportation Safety Bureau of Canada, whose chairperson was once a Masters student of mine, investigated this accident. My story here borrows a lot from what they have to say about it.

On a day in July 2019, the tuggie had completed two aerotow operations with the club’s Cessna 182 tug. The first tow had departed at 1510 (3.10 pm). The occurrence glider flight, on an ASK-21, was the second flight of the day for the student and flight instructor. The first instructional flight had been completed at approximately 1030. At 1549, the tow plane departed Runway 07 with the glider in tow and turned to the south while climbing to the intended release altitude of 5,700ft above sea level (ASL) or 2,000ft above ground. As in Australia, gliders turn right after releasing. Canada operates with high-tow procedures, like almost all countries except Australia.

Around the time the aircraft crossed the extended centreline of Runway 07, the glider flight crew radioed the tuggie and requested that he carry out some medium bank turns as part of the glider towing exercise. This had not been briefed prior to departure. At this point, the tow plane was at approximately 5,900ft ASL. The tow plane completed a medium (approximately 30° bank) left turn of about 145°, which brought both aircraft over approximately midfield, followed by a medium (approximately 30° bank) right turn of about 90°, which brought the aircraft to a track of 305° near the western edge of the field, at approximately 6,100ft ASL. The glider released halfway through this turn.

Typically, a glider pilot will release from the towline when the two aircraft are in straight and level flight. When the tow plane reached the anticipated release point, the glider had already released. But the tuggie was not aware of that. Shortly after, the glider flight crew called the tuggie on the radio to thank him for the tow. The tuggie could not see the glider but executed a left clearing turn of approximately 80°, as is standard procedure upon glider release. He did not initiate a descent at this point, but did begin preparing the aircraft for the approach and landing at CEH2.

Because the pilot of the tug could not see the glider, he entered a slight right turn in an effort to find the glider. This brought the tow plane to a track of 270°T. Still unable to see the glider, the tuggie then proceeded to complete a 90° left turn, heading almost directly south. There was no attempt to communicate with the glider to determine its position.

When the glider released from the tow plane halfway through the second medium turn at an altitude of approximately 6,100ft ASL, the glider flight crew proceeded to fly more or less on a track of 270. By releasing in a right turn, the glider was not in a position where the tuggie would normally expect to see it, in other words, behind and to the right of the tow plane.

At 1555, when the aircraft were 0.5 nautical miles (NM) southwest of the threshold of Runway 07 and at an altitude of approximately 6,075ft the tow plane’s propeller struck the glider’s empennage. The time between the glider release and the collision was 34 seconds.

When the tow plane struck the glider, the vertical and horizontal stabilizers separated from the glider. The glider entered a dive from which it was unable to recover and struck terrain in a near-vertical attitude. The student pilot and instructor were fatally injured. Both were wearing parachutes.

These defects were not recorded in the aircraft’s log

To avoid judgmental language and oversimplification, as well as the usual bromides of ‘try a little harder out there, people’ or ‘just follow the rules’ or ‘let’s write another rule,’ the Canadian TSB is usually careful when declaring ‘probable causes’ or issuing recommendations. Instead, the story itself carries a lot of that load, and raises some really interesting questions for us.

In Canada, at this club, there was no procedure to follow if visual contact was lost after the tow was released. While there is a procedure for what to do after release, what do you do when you do lose sight of each other? Or, for that matter, what more can we do to prevent that from happening? We are taught to each turn in opposite directions. In Australia, the glider turns right, the tug turns left, although in many countries, this is actually reversed.

But what do you do after that? As a glider pilot, you might persuade yourself to look at the tug for a bit longer, but then again, you may be in a thermal at that point, perhaps even with other gliders. You’d rather be watching those. As a tuggie, you might make the turn after glider release, stop after 90 degrees and then try to get the heck out of the area where the glider might still be. But perhaps this doesn’t work all the time – there may be other traffic, for example.

The tug itself should be considered. Does your club tow with a Cessna? For some pilots, looking out the windshield of Cessnas is like looking through the slit of a letterbox. Others pilots don’t see it as so limiting or troublesome. Of course, each aircraft has blind spots and blind angles. It has to have wings, after all, and whether you put them on top or on the bottom, there’s going to be stuff you don’t see.

The Issue of FLARM

Then there’s the issue of FLARM. Lots has been written about the ‘cry wolf’ syndrome of some warning systems, and thus our growing distrust (and disregard) of them. Lots, on the other hand, has also been written about our overreliance on computer- and warning systems, to the point that some are concerned that we don’t look out or up enough anymore.

This discussion is amplified when the device that is supposed to warn you only works intermittently. Intermittent electronic gadgets are perhaps even worse than electronic gadgets that have failed altogether. Because if they are intermittent, when can you trust them, when not? How and where do you write up this problem? The tug itself is airworthy without FLARM working, so your club may discourage you from writing it in a place that may cause the tug to be grounded before it is fixed.

Note that in this case, it was recorded – in the club’s own daily log for the tug, which is not a regulator maintenance release, which may well have been the type of document that guides people in the club to necessary repair and maintenance tasks. Where would you find this if it were your club?

Such questions in themselves, rather than oversimplified causal statements or recommendations, can actually push us into thinking differently about how we run our operations.