How to Get Back Into the Sky Safely

How to Get Back Into the Sky Safely 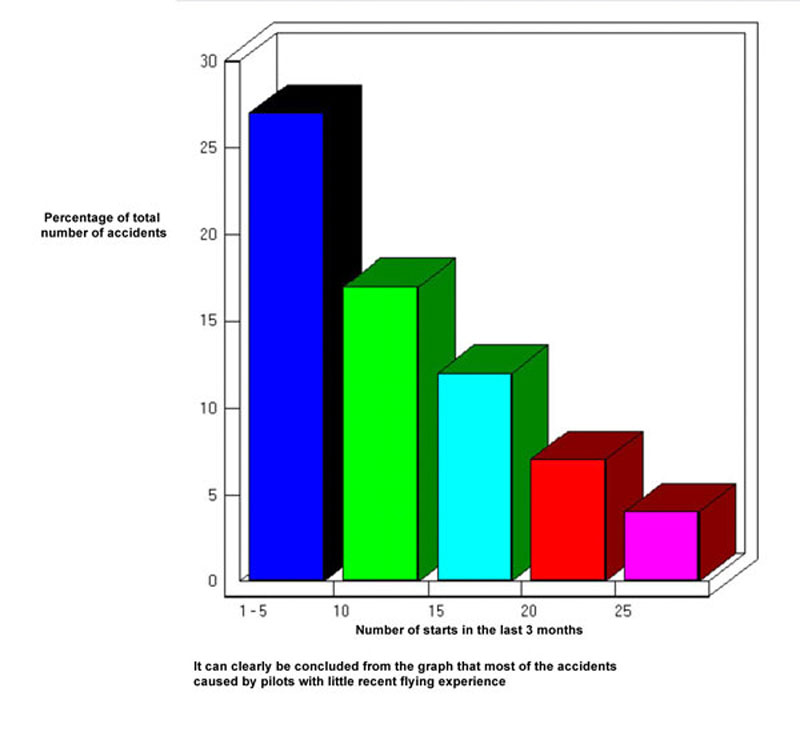 Fly often, fly a lot. There is probably no better safety advice than that, except when you’re grounded by a pandemic. Then the advice is pretty useless. So how do we get back into the sky safely as a gliding community?

Currency matters. In fact, it matters a lot. A number of years ago, the German Luftfahrt Bundesamt or LBA (basically Germany's CASA) initiated a study into the relationship between glider pilot proficiency and accident probability. You can see the link for yourself in the figure. The graph shows all the gliding accidents in Germany during a period of 15 years, set against pilot currency. The message is clear: the more you’ve flown in the last 90 days, the less likely it is that you will have an accident.

Pilot currency in the published data from the study was defined as number of launches (not hours) in the last 3 months. The LBA pointed out, however, that the same relationship applies to flying hours set against percentages of accidents. You have to assume that all German glider pilots over those 15 years were law-abiding, so there were no (solo) pilots to the left of the figure – that is, those with zero launches in the last three months.

It probably sounds intuitive that the more you have flown, the less likely it is that you will have an accident. But think about it. If you fly more, you actually are exposed to the risks of flying more. If you only fly very little, you have much less exposure to those risks. So technically, you should have a lower probability of having an accident. But the point is not the amount of risk exposure. The point is risk awareness, risk management, risk mitigation. The point, in short, is risk competency – having the ready-to-deploy skills and abilities to recognize risk, absorb it, adapt to it, handle it. Risk competency comes chiefly from pilot currency.

So how can we translate this into a safe return to the skies? In Northern Europe and North America, pilot proficiency represents a recurring problem. A ‘winterstop’ there, after all, may last as long as half a year. To handle this, the LBA designed a ‘Sicher Segelfliegen Trainingsbarometer’, an idea from Ole Didriksen and worked out through a collaboration between the Deutsche AeroClub and the LBA. The BGA (British Gliding Association) then took and somewhat adapted and translated the German barometer from the 1990s, giving it some pretty colours. The barometer is as current as ever - pun intended. Have a look at it, spend some time on it to do the numbers that apply to you. You can find out where you’ll be once your club has created the opportunity for you to fly again.

Being an instructor, by the way, is no protection against the reality of this barometer! It’s not that you bump up into the green merely because you’re an instructor. Currency is blind to your ratings – it doesn’t care, which is why there is no provision for them in the barometer. Some clubs make sure their instructor corps has the first opportunity to achieve currency again. It is a sensible move that can ensure that you don’t end up completely grounded and wingclipped as a club. 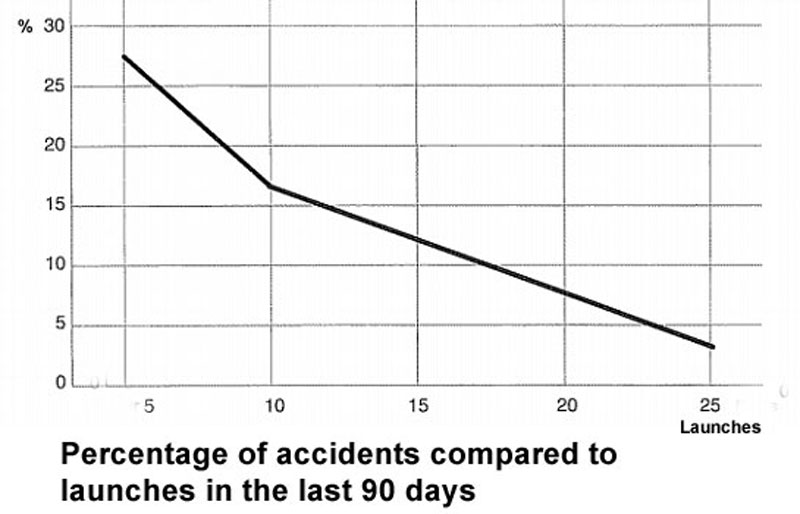 What else can you do? Some pilots enter into a weather/conditions minimum contract with themselves – a kind of safety floor below which they won’t fly – and some even tell their CFI’s, duty instructor or training panels about that contract. Like most contracts, this one can be renegotiated when things are looking up, and you feel a bit warmer in the saddle again.

The idea of such a contract is not bad. As some of you will have found when flying around in bushfire/duststorm-polluted skies recently, there can be quite a gap between being legal and being comfortable or, for that matter, being safe. Visibility of 5km, for instance, is really not a lot when you’re cruising along at 80 knots. At that speed it’ll take you about 120 seconds to fly into the area you cannot now see. The difference is particularly large when you are used to flying with some 30, 50 or 100km visibility.

The same goes for crosswind handling of your, the club’s or your syndicate’s glider. The maximum demonstrated crosswind component in the book was demonstrated by someone who was pretty current and who hadn’t just been playing Condor for the last few months. You may not be able to replicate that demonstration – for the first time after a long hiatus – as neatly in the same way.

Long wings and slow roll rates don’t tend to make this process any easier. I remember how much I thought an Airbus A340 and even a 737NG have in common with long-winged gliders. Both aircraft have relatively long, slender wings and are indeed ‘good’ gliders themselves . It’s hard to slow down and go down in them at the same time, as ATC often wants you to do. Once, when crabbing down along the glide path in a strong crosswind at Berlin’s Tegel airport, after just having completed my type rating on the 737NG, I thought the plane would be docile enough for me to kick it straight, like any other, and drop the wing into the crosswind, so that I’d touch down on the one main gear into the wind first.

However, by kicking the plane straight, the wing that I wanted to go down, went up instead. The airspeed increase on one wing, and decrease on the other – induced by my decrabbing rudder input – was enough to send the wing up, despite my turning the yoke into the wind. Big-wing birds, like the 21m JS-1 that one really nice owner let me fly recently, can do the same thing when decrabbing in a stiff crosswind. Incidentally, I flew with plenty of airline pilots who had stopped bothering to kick the plane straight. Instead, they plonked it down in a crab to let the undercarriage sort out the de-crab for them. Though both legal and technically possible, since the undercarriage can withstand quite a crab on touchdown, it always felt heart-wrenchingly ugly. You don’t really want to do that in a glider. 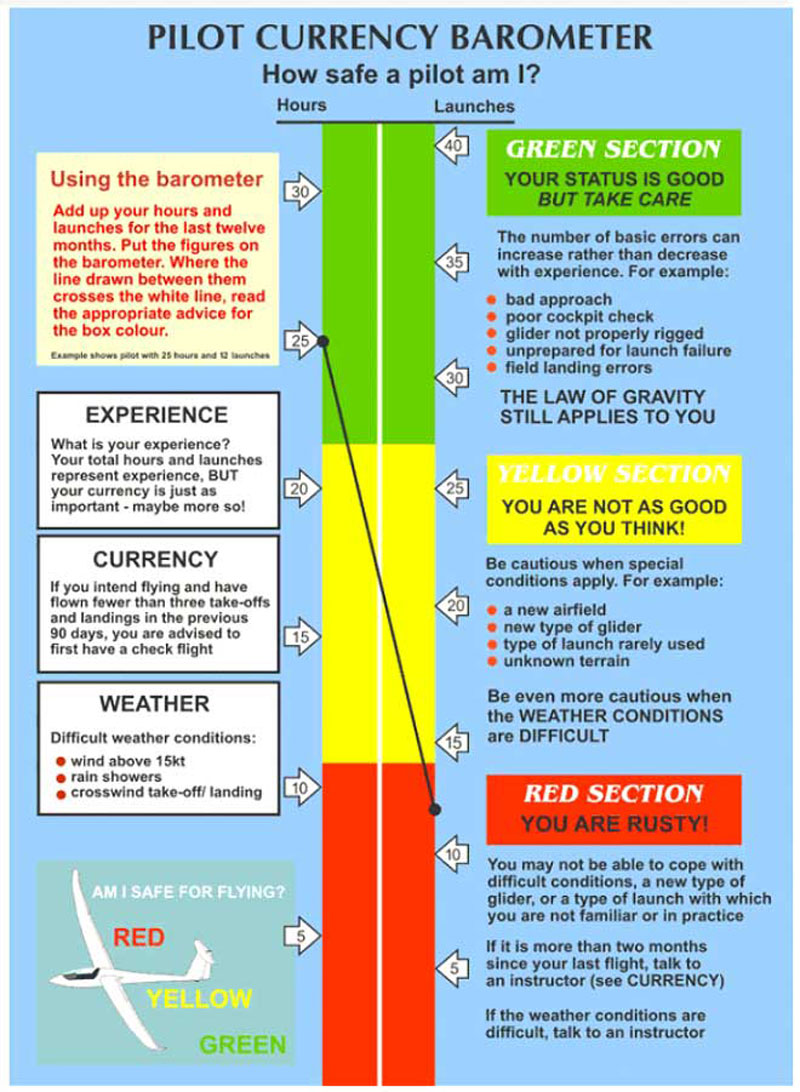 States and territories have their own policies, guidelines and rules in place for which activities are allowed, and how many people can participate. Meanwhile, those policies, guidelines and rules are changing often. So first of all, by checking your local government website, for instance, you can see what is possible where you live and fly right now. But within that, your club can take a bunch of practical measures to ensure the safety and health of your pilots. A proposal might comprise of the following suggestions, which you can run by your local authorities if you think that would be a wise idea:

-There will be no student training until it is deemed safe to resume doing so.

- The decision to participate on any particular day will be entirely at the discretion of each member and no member’s choice to fly or otherwise will influence the decision to do so by any other member.

-  Any member who is unwell or experiences any of the symptoms of Covid-19 must not travel to the gliding field until they have either returned to full health or tested negative to a Covid-19 virus test and self isolated from the airfield for at least 14 days.

-  Members who choose to fly will travel to the gliding airfield in a manner consistent with local government guidelines at the time.

- Nobody should enter the clubhouse, and all participants should arrange to bring their own lunch and drinking water to the field for the day.

- Members are also encouraged to bring their own chair and other items of comfort so that they do not need to use any gliding club facilities.

- Hands are to be washed rigorously before and after use of the facilities. Individuals can bring their own soap or hand sanitiser to the field on the day.

- The tow pilot will use an alcohol wipe to clean all contact surfaces (e.g. joystick, harness buckles, door and window frame) and will provide his or her own headset on the day.

- Everybody will remain at a distance of more than 1.5m at all times. This is not difficult as we rarely need to be less than several metres apart. The only exception to this is at the point of hook-on, but members are well separated by a closed glider canopy for this very brief moment, usually lasting no more than a minute.

- All members will wash their hands immediately upon arrival at the field and at least hourly thereafter unless actively involved in flying at the time.

- Many members have their own gliders or are part of a syndicate with no more than one other pilot. Syndicate members should take appropriate precautions, as suggested above for the tow pilot, to ensure that the glider they are about to fly is free from contamination. Members who hire a club glider should also use alcohol wipes to decontaminate all surfaces before preparing and flying the glider each day.

- l If a pilot feels that he or she may need to outland, that pilot should land preferentially at an airstrip that will allow an aero-tow retrieve. This action should under no circumstances compromise the safety of the pilot or glider.

- In the unlikely event of a paddock outlanding, no more than two members will assist with the process of derigging the aircraft for return to the airfield.

- The process of de-rigging a glider can easily be carried out while maintaining a safe social distance of at least 1.5m.

- Under no circumstances should club members become a visible ‘gathering’ under the understanding of the regulations and rules in place in the state or territory at the time.
These are some ideas about guidelines for local rules you can put in place to create an environment where pilots can begin to return to the skies safely. Fly often, fly a lot!

With thanks to Dan Papacek for his contributions and ideas.