Aero Towing out of Paddocks - Additions

Last month’s article on aerotowing out of paddocks had some useful practical information for glider pilots to consider when requesting an aerotow retrieve from a paddock. 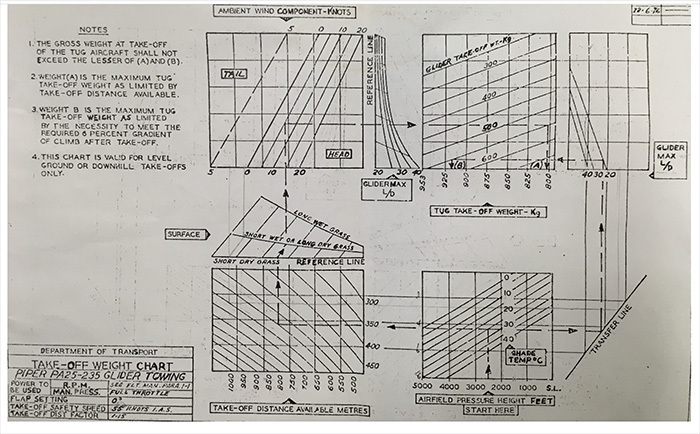 By Patrick Barfield
Chair of the GFA Operations Panel

It is worth pointing out that the GFA Aerotowing Manual is the authoritative reference for aerotowing procedures including paddock retrieves (section 11). Tow pilots with an outlanding retrieve endorsement are trained in the conduct of aerotow retrieves and will be the command pilots responsible for safety of the flight for the towplane and glider combination.

The article didn’t mention the most important legal requirement, which is to seek the property owner’s approval to land in and take off from the paddock. Note that aerotow retrieves are prohibited on total fire ban days.
There is no specified minimum paddock length for taking off because each take-off needs to consider the factors outlined in the article and the tow pilot needs to calculate the required take-off distance using the Performance charts (P charts) in the Towplane Pilots Operating Handbook as per the following example for the Pawnee. Note that the chart considers only grass surfaces and not ploughed paddocks, so the effect of soft ground needs to be carefully considered. The P chart factors only level surfaces and, as per the Aerotowing Manual, uphill take-offs must never be attempted.

The aerotowing manual has the following guidance for levelling the glider’s wings for take-off: Any vegetation over about 10cm long rules out a wing-down take-off, as the glider pilot will not be able to keep straight due to the drag of the wing in the grass. Don’t try it. Don’t take chances with long grass and don’t drop your guard just because it looks like it’s only in small patches. If in doubt, get the trailer.

If the field is too rough for a wing down take-off, unless there's sufficient headwind to provide aileron effectiveness, propping the wing could be hazardous because the wing will fall on the ground as soon as the glider starts to move forward, resulting in a probable ground loop and/or tug upset.

If you have an enthusiastic volunteer to run the wing, be sure this person is very carefully briefed, as almost everyone holds back on the wing the first time they do it. This is a problem both the tow plane-pilot and the glider pilot can do without at any time, but especially in a paddock take-off.

Before requesting an aerotow retrieve, consider the associated threats. Aerotow paddock retrieves generally occur late on a hot summer day when the pilot is more likely to be fatigued and dehydrated, taking off from an unfamiliar paddock. Consider also the risk versus the benefits. In the past 7 years, at least three gliders have been damaged during aerotow paddock retrieves that would not have been damaged if the pilots had elected trailer retrieves.