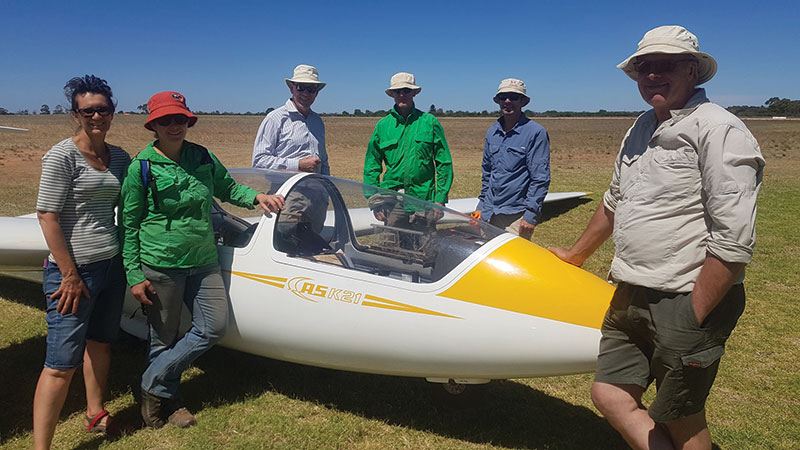 This year’s SAGA Coaching Week at Waikerie was a great success, featuring 30 coaches and students flying in five twin seat and seven single single seat gliders, and benefiting from some outstanding weather. Several great milestones were achieved as well, including a number of badge flights, aerotow conversions and long cross-country flights.

We also had to deal with a Covid challenge when one person tested positive during the course, but fortunately only a few pilots had to isolate or leave the course. Apart from the one positive case, acquired before the course, all the close contacts tested negative.

Coaching week is an ideal format for both new and experienced pilots. Morning lectures were followed by afternoon flying when all the theory is put into practice. Many pilots progressed quickly and were able to follow their coaching flights with badge flights in a single seater.

We were also so fortunate to have Jason and Sandy Goldup cooking evening meals, and enjoyed such a great atmosphere each night around the bar followed by a fantastic meal.
Also, great credit goes to the Alice Springs Gliding Club with six members making the long trip to Waikerie. For some of them, it was their first chance to experience cross-country flights and aerotowing, resulting in coaches signing off four of the Club’s pilots on their aerotow conversion.

Further achievements were three first time Silver C flights, a 5 hour flight, a completed C Certificate including an outlanding check, a 500km badge flight, a 750km flight, a Silver Coach rating – and a pilot who finished two 1,000km flights. As I said, we had some great weather!

Thanks to the Waikerie Gliding Club for making their Club and accommodation facilities available, thanks to our tug pilots and thanks to the coaches and students for making it such a great week of cross-country flying.
SAGA Coaching Week will be on again at the end of this year after Christmas with dates to be announced soon. I look forward to seeing you there. 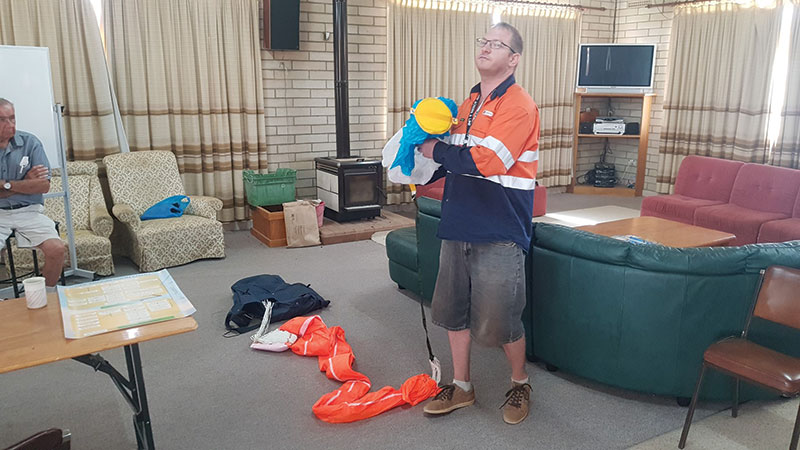 From 26 December to 1 January, members from SAGA clubs across South Australia and the Northern Territory gathered at Waikerie gliding club to learn to fly faster and longer at the annual coaching week. Participants with a range of experience from solo pilots to GPC came to push themselves and their cross country flying to the next level. I was one of the pilots from the Alice Springs Gliding Club who made the long trip to participate in this year’s event.

Conditions for the first two days were challenging and a 100km triangle task set on the 27th saw a mixed result, with some successful attempts but also a few abandonments and an outlanding. I soon discovered that local farmers are just as friendly as the Waikerie Club members. When I showed up as part of the crew for the retrieve, we discovered that the farmer whose field had served as a landing strip had generously lent his car to the unfortunate pilot so he could show us the way from the gate.

Those of us from winch launching clubs took the opportunity presented by the less than ideal conditions to receive tow conversion training from instructors Patrick and Derek. Everyone was very organised and despite having plenty of students to teach, we were soon trained up and prepared for the days ahead.

Chatting at the bar later, it came up that my remaining obstacle to a C-certificate was the outlanding training/checks, which are hard to do back home in Alice Springs because of the ever-present scrub. One instructor called out over my shoulder to another and they roped in a third to discuss possibilities for getting the checks done so that I could fly cross country solo.

An hour later I was told it had all been organised. I would be driving off to Adelaide University Gliding Club at Stonefield in the morning to meet an instructor who was picking up a glider to fly in their motor Falke. So the next day, while everyone else at Waikerie was comfortably flying a 150km triangle task in blue conditions, I was happily buzzing field after field in simulated outlandings.

Unfortunately, but not surprisingly, the next day COVID managed to throw a spanner in the works. An exposure event meant isolation for a few close contacts and an early end to the week for many participants. While it was unfortunate to lose four attendees, those of us who stayed were treated to a stunning day of early strong thermals up to 10,000ft with cumulus everywhere.

Everyone wanted to see how far they could go, so no task was set and pilots went in all directions in search of the best conditions for a long flight. The flight of the day goes to Peter Temple, who flew over 1,000km and arrived back as the sun set while the rest of us were already eating dinner.

Over the next couple of days, we continued to push ourselves further from home at higher speeds. A particular highlight for me was a 300km triangle in Waikerie’s Duo Discus. After starting the flight taking most thermals and not leaving early enough, I was treated to an impressive demonstration of assessing thermals quickly by my instructor.

Newly emboldened, I was determined to be more selective to increase my average climb speed. My coach approved at first but when I began falling out of the working height band an hour later while remaining just as ruthless, I was told that it was possible to take the idea too far. Despite that, we got home with a higher average speed than I’d managed before and I’d learned a lot. 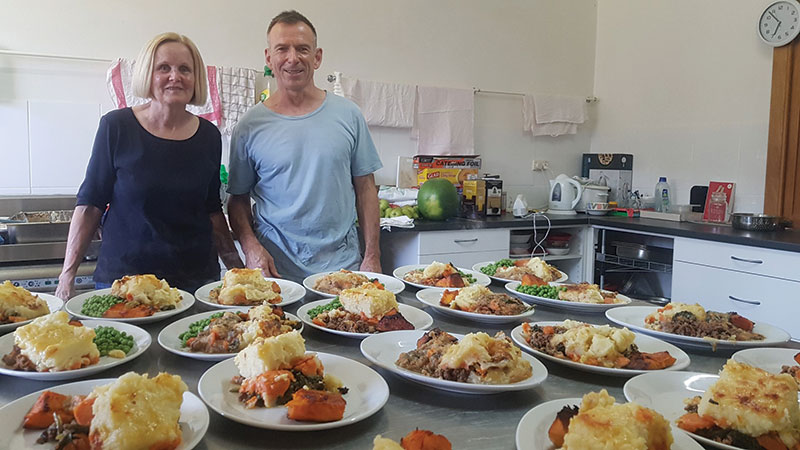 New Year’s Eve brought stellar conditions with strong thermals to 14,000ft and excellent cumulus. In the words of one coach, this was our second ‘best day of the season’. Honourable mention goes to Sam Woods who took full advantage of the day to fly a 750km task in a Standard Libelle. Most importantly, all COVID tests had come back negative and those isolating could re-join us in the air and on the ground.

It was a fitting end to a great week as we put into practice what we’d been learning, which yielded some silver badges, a few gold and diamond legs and, significantly for myself, a first solo cross country flight of 350km. Flying alone far from home was an almost transcendent experience and it was one I owed entirely to the instructors who’d been there to provide whatever training I needed to achieve my goals, as well as some friendly motivation.

Of course, time in the air was only half of the experience of coaching week. Each day started with a 9am weather briefing followed by a lecture. Topics covered included outlanding with a particular focus on the Riverlands, thermal selection and centring, speed to fly theory and more. Mandy Temple’s lecture on dehydration was particularly fascinating and led to curious pilots weighing themselves before and after flying to compare personal rates of fluid loss. For those like me who’d never seen a parachute used, it was also very interesting to see Sam McKay’s demonstration of parachute use, deployment and internal design.

The end of each day was as much of a highlight as the beginning. Not only does the clubhouse have its own bar, but dinner was also catered each evening by the superhuman efforts of Jason and Sandy. Highlights included goulash, roast chicken and shepherd’s pie, and every meal was followed by dessert including poached pears, baked custard and pavlova. I loved being able to focus all effort on gliding throughout the day and then come back to share a meal and chat about the day’s flying with other attendees and I can’t thank Jason and Sandy enough.

The Riverlands itself was another star. Like many new cross-country pilots, I was intimidated by that invisible wall that symbolises being out of glide range of your airfield. However, the friendly conditions and abundance of outlanding opportunities made it easy to push through with a minimum of separation anxiety and to do so at speed. For anyone who’s looking to take themselves to the next level in cross country flying, whether you’re a pre-C-certificate pilot or more experienced, I can’t recommend a visit to Waikerie and coaching week enough. You’ll be surprised by what you can accomplish in a week. I hope to see you there next time.

Thanks go out from all the grateful students to Craig and Bill for organising the event, Peter for stepping in for Craig, all the instructors, and Lloyd and David for getting all of us in the air in the first place.