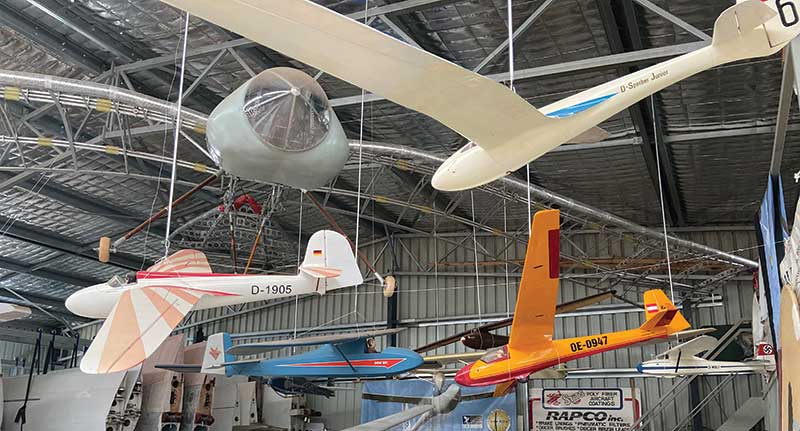 Restored Schleicher K 8
\Approaching the completion of its restoration plan under the leadership of Peter Raphael, the attractive bright, shiny red and yellow colour scheme will be a standout on the airfield surrounded by white sailplanes. The K 8 was imported as a kit and completed by members of the RAAF Williamtown Gliding Club in the 1960s. Its pleasant flying characteristics and ability to stay airborne in weak conditions endeared it to many glider pilots.
The K 8 was designed by Rudolf Kaiser in 1957 and built by Alexander Schleicher. It has been described as the single seat version of the K 7 Rhonadler. It proved popular with clubs in its role as a sailplane for early solo flying, and over 1,100 were produced.

The Museum’s example is a K 8B, the second variant of the design, distinguishable by a larger blown plexiglas canopy and improved ailerons. This particular glider was built by the RAAF Williamtown Gliding Club from a kit supplied by Edmund Schneider Ltd of South Australia, as an agent for Alexander Schleicher. It was test-flown on 8 July 1967. For a period from August 1994 it was owned by a syndicate at the Bendigo Gliding Club. The last entry in the log book is dated January 1995 at which time the glider had accumulated 1,148 hours from 2,303 flights.

From 1967 to 1994, the glider was flown at numerous places including Williamtown, Bellata, Warkworth, Dubbo, Waikerie, Quirindi, Tamworth, Redding, Narromine, Leeton and Keepit. During 1994 and 1995 it was flown a few times at Bendigo. A notable flight recorded in the logbook is dated 31 October 1971 when Warwick Kenny reached 11,000ft in height during a flight of 5 hours 10 minutes.

The last owner prior to the transfer of the glider to the Australian Gliding Museum in 2015 was John Ashford of Geelong Gliding Club. It carries Serial Number 8478-SH and appears to have been registered first as VH-GPA, and later as VH-GMA. The last registration (VH-GMA) was cancelled in 2011. The trailer requires considerable restoration work and will be the subject of a GoFundMe appeal for assistance with recovering costs.

Olympia Well on its Way
Restoration also continues on the Olympia, which it is hoped will also fly soon. The Olympia was the result of a competition for a standard glider design for entrants to fly in the planned 1940 Olympic Games in Germany. The winning design chosen was the ‘Meise’ from DFS in Germany, and its designer was Hans Jacob. The 1940 Olympics were cancelled due to the outbreak of war. Post-war international gliding competitions were organised as World Championships, not as Olympic events.

After the war, the Meise was manufactured by firms in Europe and a few were built by amateurs from plans.

In 1945, a United Kingdom firm, Chilton Aircraft Limited, revised the plans for the DFS Meise Olympia, keeping its aerodynamic shape, and prepared new technical drawings for the production of the Chilton Olympia. Chilton engaged Elliotts of Newbury, a firm with aircraft production experience gained during the war, to build a set of wings for its prototype. Elliotts made the wings but then apparently refused to let Chilton have the jigs required to build more wings. 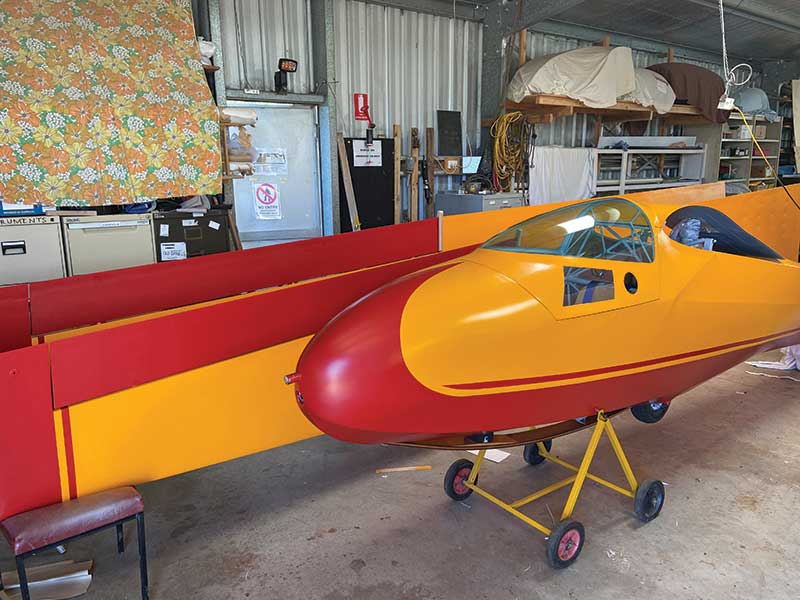 The matter was resolved by Chilton transferring its production rights and equipment to Elliotts. Elliotts produced several batches of Olympias, the ‘EON Olympia’, probably about 150 in total from 1947 including Marks 1, 2 and 3 versions that featured some structural changes and design improvements.

The Australian Gliding Museum’s Olympia is a Mark 2, actually 2B according to the logbook, which can be distinguished by the built-in main wheel and blown perspex canopy. It was designated as serial number EON/O/34 by Elliotts.

It was damaged badly at Bristol in the UK in 1949. The wreckage was acquired by a Melbourne-based syndicate including Dave Darbyshire, and imported into Australia. Additional damage occurred in shipping due to the need to shorten the wings to fit them into a crate! The syndicate rebuilt the glider and re-launched it in 1956 under registration number VH-GHR. The syndicate and several gliding clubs in Victoria and South Australia continued to fly it until about 1972.

Restoration work has gained momentum as Covid restrictions have eased, and volunteers are back in action at Bacchus Marsh on Tuesdays and Fridays