By Peter Raphael and Dave Goldsmith

The first flight of the Museum's K8b since January 1995 took place on Tuesday, 9 August 2022. Normally on Tuesdays, activity in the Museum and workshop is in full swing, but today we had other plans. A beautiful sunny day at Bacchus Marsh, with cumulus clouds and light winds, encouraged the keen team to go flying.
Peter Raphael, the restoration team leader, went first and when he returned after a soaring flight was very enthusiastic, declaring the glider handled beautifully  and was a delight to thermal. Others who enjoyed the soaring were Jenne Goldsmith, Dave Goldsmith and Leigh Snell. Meanwhile, James Stevenson missed out, disappointed to be the only tow pilot available.

The restoration work on K8b - GMA was very comprehensive, with the objective of restoring it to a 'better than new' condition, as it was evident that the glider had the potential to be an excellent representative of the type, not exhibiting some of the glue problems faced by imported models. Ultimately, the work involved disassembly to component level, with all old finishes removed. This effort gave us the opportunity to identify and rectify not only unseen damage but also some flaws hidden in the construction.

The program commenced in July 2018 when the wings of the K8 were transferred from John Ashford’s 40ft shipping container to the museum workshop at Bacchus Marsh. Component restoration, inspections and repairs were then undertaken in preparation for the wings to be re-covered at the November Fabric and Refinishing course run by the Australian Gliding Museum. The museum has specialised in covering courses focusing on the Poly-Fibre system for a number of years, and these courses are very popular, providing supervised, real-world experience in the process.

In January 2019, the wings were moved to the spray booth and the fuselage was transferred to the workshop when the major task of refurbishment commenced. It was stripped completely of its cotton covering and paintwork, which was in poor condition, and all components removed from the steel tube frame. While these assemblies were overhauled and refinished, the arduous task of removing the old paints and glues from the tube frame proceeded. This gave us a good opportunity to examine the tube, when it was noted that a few minor repairs would be required before painting. 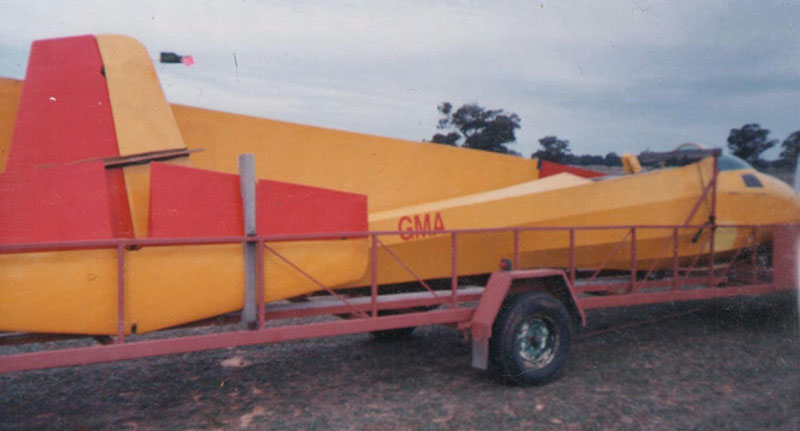 The fuselage then had a brief holiday away from the museum and when it returned it had been refinished in 2K lacquer and fitted out ready for covering. Unfortunately, the Covid crisis then stepped in and stalled the covering process until March-June 2020, and it wasn't until July 2020 that the fuselage occupied the spray booth. Another 12 months of lockdown interruptions and travel restrictions ensued before the completed fuselage could move back to the workshop for final assembly and rigging.

The Melbourne region was getting very good at this lockdown caper!
Finally, in March 2022 it was down to Weight and Balance, minor detail and paperwork. Thanks are due to Roger Druce who presided over the W&B, and to CTO Dennis Stacey, who helped with the documentation process and issue of a new C of A. A little over 55 years had elapsed since this glider’s first flight and it was with some elation that several museum members could be present at Bacchus Marsh to share in its recent resurrection and return to the sky. 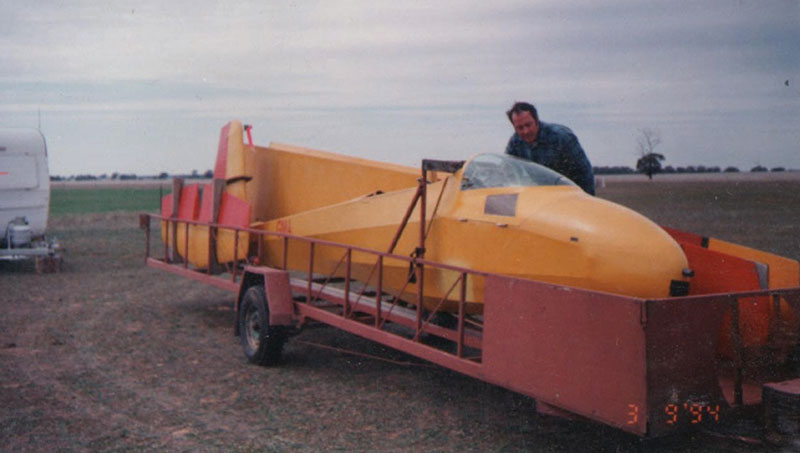 As the museum volunteers only meet on Tuesdays, and occasionally Fridays, a restoration on this scale can take some time. While it may have been completed some two years earlier, the loss of manpower through global events had conspired to drag the process out and volunteer numbers have suffered since. Nevertheless, many museum members past and present will now, for their part in the restoration, be able to share in this accomplishment.
Our attention has now turned to completing a suitable trailer as the intent is for museum gliders to be available for AGM members to fly at vintage rallies across the country. This should be ready for the 2022/23 season.

Historical Information
The K8 was designed by Rudolf Kaiser in 1957 and built by Alexander Schleicher. It has been described as the single seat version of the K7 Rhonadler. The K8B, the second variant of the design, is distinguishable by a larger blown Plexiglas canopy and improved ailerons. Over 1,100 were produced.
The K8 proved popular with clubs in its role as a sailplane for early solo flying. Its pleasant flying characteristics and ability to stay airborne in weak conditions endeared it to many glider pilots.

The Museum’s example was built by the RAAF Williamtown Gliding Club from kit supplied by Edmund Schneider Ltd of South Australia as agent for Alexander Schleicher. It was test flown on 8 July 1967. For a period from August 1994, it was owned by a syndicate at the Bendigo Gliding Club. The last entry in the log book is dated January 1995 at which time the glider had accumulated 1,148 hours from 2,303 flights.

From 1967 to 1994, the glider was flown at numerous places including Williamtown, Bellata, Warkworth, Dubbo, Waikerie, Quirindi, Tamworth, Redding, Narromine, Leeton and Lake Keepit. During 1994 and 1995 it was flown a few times at Bendigo. A notable flight recorded in the logbook is dated 31 October 1971 when W. Kenny reached 11,000ft in height during a flight of 5 hours 10 minutes.