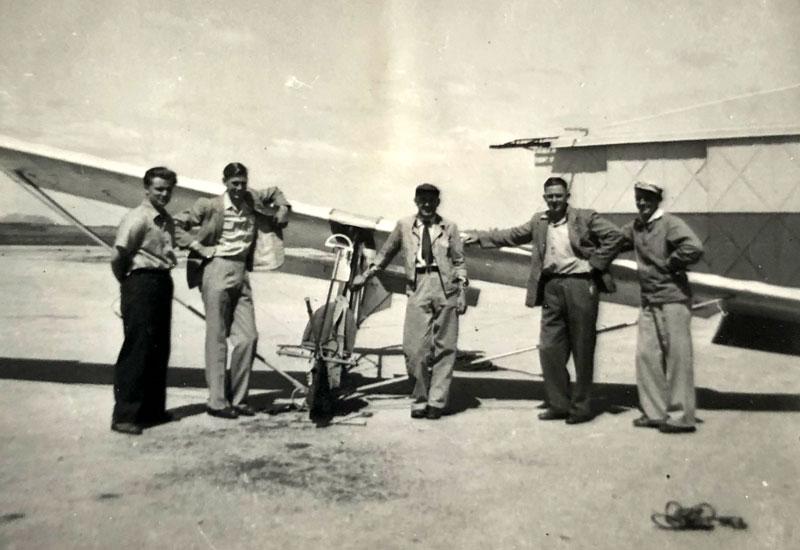 In 1948, while living in Mt Gambier, I became aware of a group that was building a glider to fly. Enquiries lead me to a chap named Frank Swartz. He worked in the town as a motor mechanic and explained the flying idea to me.

Those interested met on a Thursday night in a domestic garage located on Commercial Street at the western end of town. The glider they had chosen was a Grunau Baby designed in Germany during the 1930s. Plans had been obtained and when I joined, considerable progress had already been made constructing the various components to enable the full sized glider to be assembled.

I joined in the task of framing ribs for the wing. All the timber used was light and costly, and everything used had to be manufactured by the team. Steel brackets and cable runs were all part of the build. Eventually it was completed and we rigged it outside the garage

For transport, the wings were designed to be attached at the gliding site. Arrangements had been made to use a truck with relatively high sides to transport us 10km north of the town to the Aerodrome. The surrounding farms had adequate large paddocks to land out, if necessary, and since the airstrip at the airport was used only occasionally for passenger DC3s, it was usually clear of any traffic. 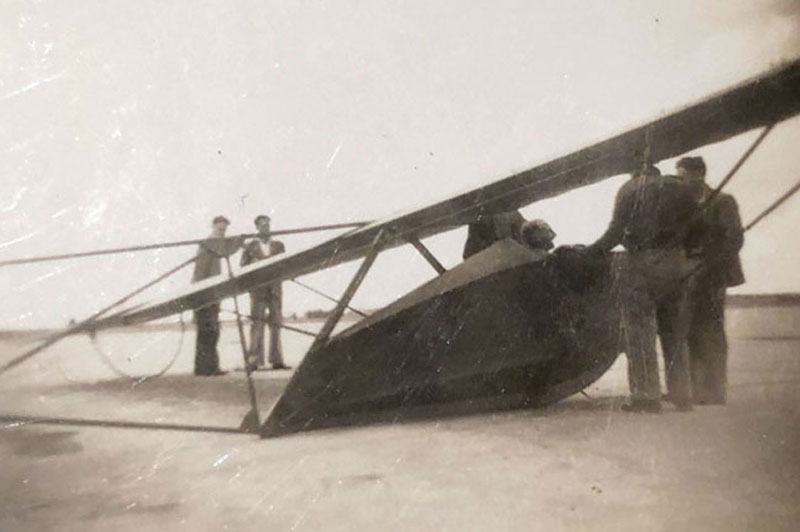 The intention, after rigging, was to tow the glider into wind on a long cable behind a motor car to get it into the air.

Several members of the group had been pilots in the recent war three years earlier. They intended to fly the glider first, planning to teach the rest of us later in the program. There was at least one Spitfire pilot among us, Charlie Miller from the bakery on Bertha Street.

Many Sundays were spent and false starts to fly were made till we eventually broke something, and then it went back on the truck to return to the garage for repairs.

The more industrious among us built a winch on a trailer, which could be used with a very long cable to haul the craft to circuit height. Our Sunday adventures continued, following a standard pattern. Fly, break and repair. 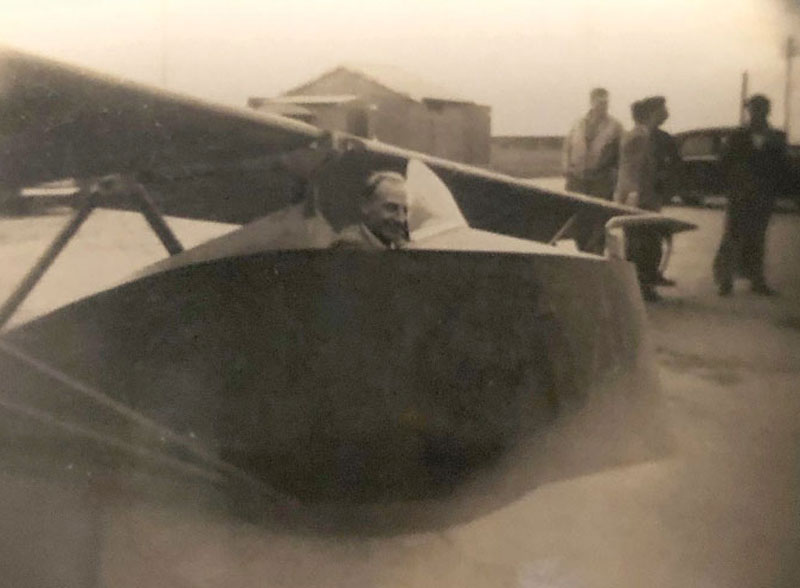 When the aircraft is pulled by the winch, it climbs at a very steep angle. When it reaches the required altitude, the cable is released by the pilot, who then makes a turn downwind and a subsequent landing. This sounds simple but it entailed hours of work. Not being involved in the operational side we ‘worker’ members retrieved the cable, rewound it onto the drum, pushed the glider in place for the next launch and generally ran around as directed.

The inevitable happened. One of the pilots lost airspeed in his turn and the glider stalled and crashed. The breaking of the wooden fuselage absorbed the shock and the pilot was not injured. The glider looked a write-off but, loading pieces into the truck we returned to our garage and attempted to rebuild it. At the time, we were disappointed that the chap who crashed it did not return to assist the repair. 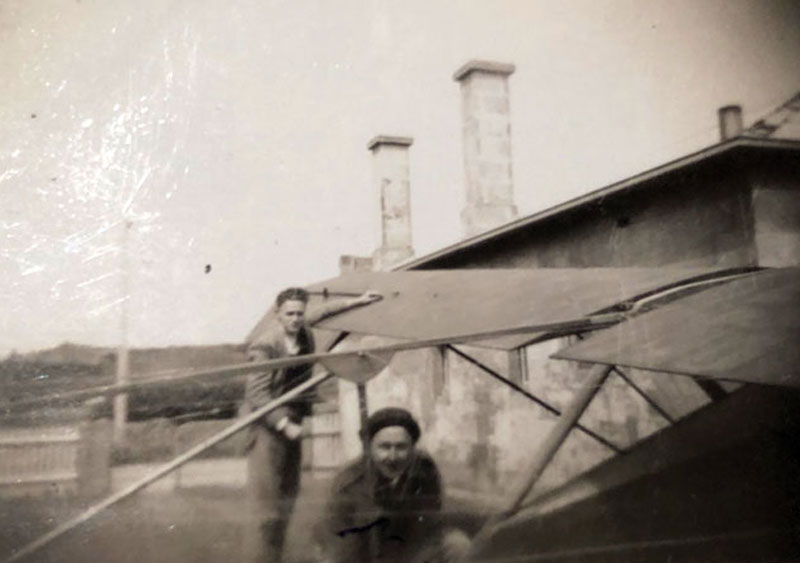 A decision was made by the builders, in an endeavour to minimise the work, to dispense with the streamlined body and rebuild it as a simple primary glider. This design of glider only has a main keel, a structure to hold the wing and a seat for the pilot, wh needed goggles and warm clothes. The launch, flying and landing continued in a satisfactory manner for some weeks. Our intentions of learning to fly looked dismal, so one of the more practiced pilots offered to take each of us up for a circuit of the field.

My turn came. You stood on the narrow keel with your feet positioned across the beam, crouched behind the pilot holding tight to the wing support posts and, with a wave to the winch man, the glider accelerated. 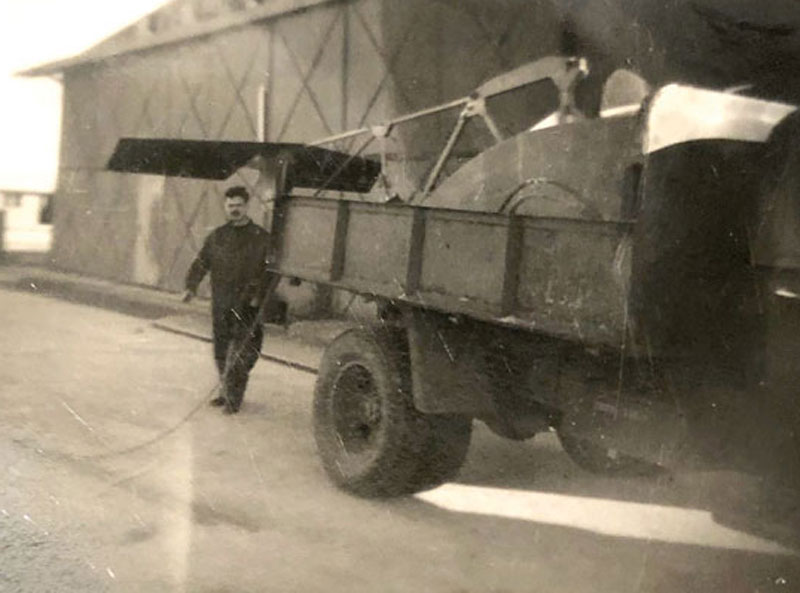 I found the rate and attitude of the initial climb very steep and alarming, leveling out at circuit height. I gained a view of the airport surrounds then we were lining up to land close to the winch.
A rather hairy operation. No safety monitoring by Government officers or Health and Safety officials. Eventually the project came to an inevitable end and the glider became a memory. 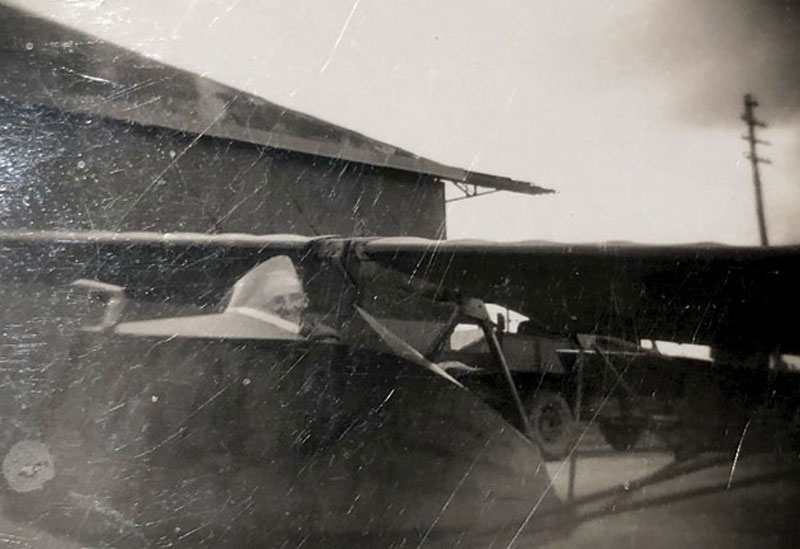